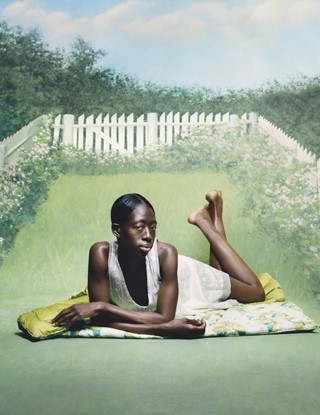 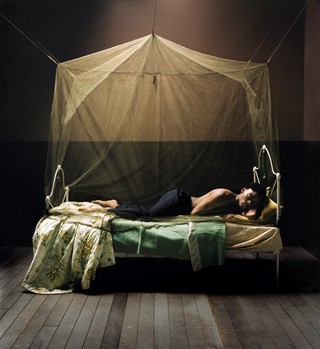 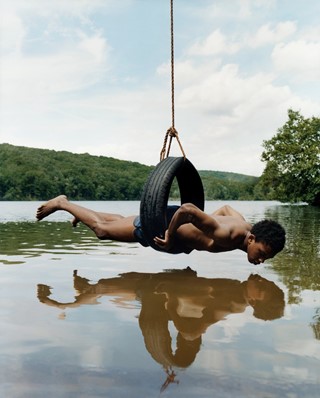 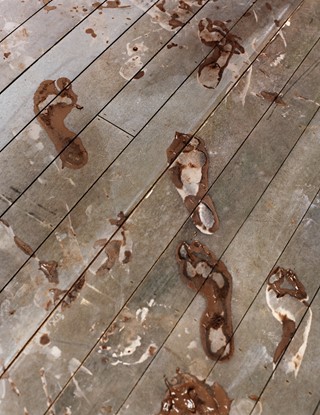 ‘Chrysalis’, an image by Tyler Mitchell, portrays a young sleeping man under a mosquito net. Eyes wide shut, he seems to be navigating the complex folds of a dream, the past and present in surreal collision. Mitchell is intrigued by compositional layering like this. His work, he tells Rianna Jade Parker, is coated in a barely visible atmosphere, a strangeness that tugs it back decades, to the nostalgia of youth, family and our natural surroundings. His debut solo show in London presents images that tap at the history of Black life in the American south, speaking to a ‘fundamental resilience, radiance and full human agency’ in its people. The netting, invisible or not, through which his work is filtered is there to be overcome and broken through.

You’re most known for your fashion and documentary photography, but you are also a fine art photographer. What are the markers of distinction in these genres for you, and do you have a preference?

Tyler Mitchell: I think that for quite a long time, there’s been external pressure from the outside world to make a decision and stick to that. I have this long trajectory of being from Atlanta making skateboarding videos and some music videos, which got me up to New York for film school. I wanted to take on photography in all its many forms, but I had anxiety about deciding what was more important; a picture printed on a magazine page or a picture exhibited in a gallery or museum space. I still think that, in people’s minds, photography is burdened by the issue of facts and biography; it always has to explain where the picture was made, who’s in the picture, and all of those documentary aspects. Our experience of an image we know is universal, we know it is so all-encompassing. And what I’m realising now is that both excite me equally and that hopefully, with the position I’m in at this point in my life as an artist, [I can] continue to level the boundaries and the borders.

You have said previously: “I’m a concerned photographer. There was a ladder for the people who came before me, and there’s a ladder now – it’s just a new ladder.” This also rang true for photographer Gordon Parks who, in the preface of the second edition of his 1966 autobiography A Choice of Weapons, wrote: “I didn’t set out to preach sermons or deliver profound messages. I simply wanted to get a few things off my chest that weighed heavily upon it for too many years.”

Tyler Mitchell: You know, I did the Gordon Parks Foundation Fellowship, and you can see threads of his work in my own. I’m absolutely hoping to get things off my chest in the way that Parks felt he needed to, to sort of utilise his camera as a tool to talk about the way Black folks lived. But there is something else going on in my work as well, a sensibility of just pure leisure I suppose, almost frivolity. In this way, a theatrical or childlike nostalgia of surrealism enters the work.

You’ve come a long way since your first camera, a Canon 7D, and your degree from New York University, but any artistic practice is always in flux and malleable. With time and access to resources being less of a barrier for you now, what technological advancements are you looking forward to exploring?

Tyler Mitchell: I feel like a luddite in this way. In the early 2000s, there was this big push towards everything going digital – like, forget analogue, forget chemicals and figure out how to use a DSLR camera. And that’s precisely the point at which I was a teenager. There’s been a bit of a reverse where older photographers have now taken up digital and don’t look back, but actually, photographers in my generation, I sense, are picking up analogue cameras and going the [other] way. So my hope is to be the best at operating any camera, to pick it up and make an amazing image with a point and shoot as impressive as a four-by-five large format.

Your first solo exhibition in London, Chrysalis, will add some much-needed colour to the flurry that is Frieze. You’ve said that we can expect to see “varying states of self-protection, repose, struggle and self-determination.” I wonder, what are you protecting yourself from these days?

Tyler Mitchell: In this new world that we’re in, which is sort of on the other side of a pandemic, mortality is much more apparent, but also, socially, I feel like everyone’s in more of a protected zone. I’m indulging myself in the way that making pictures for me is a form of protection. I’m able to create and live out these little moments or small figments of dreams in which Black people exist within the space of a frame where they are unencumbered. They’re not having to be hypervigilant about social and political dangers, the hypothetical threat of a white gallery space, or any of these things that remind them to get out and stay out.

You have a very distinctive style and sense of purpose when you’re pointing your camera. What or when would you consider ‘your peak’?

Tyler Mitchell: The main goal for me is to be compulsively prolific. I want to have a career in making images, still and moving, for the next 30 years. I’m not saying all those images are going to [meet with] equal degrees of success. I’m open to the idea that the following periods of my work may not be as great as others, or they may be even better. The most important part for me is to continue being prolific. I’m in this place that is both emerging and not emerging at the same time. I’m emerging into myself, and this body of work is a new step, a stronger and more defined step. I’m sitting squarely within my world that I’ve created photographically, at the intersection of commercial and conceptual, and I’m advancing with a new language.

What are the building blocks of this new exhibition and how did you begin to conceptualise it?

Tyler Mitchell: In the new body of work, you will see a variety of lightly staged scenes in which I tell short narratives about young Black life. You will see an image of a boy covered by a mosquito net lying on top of layered, quilted bed sheets. In another frame, a young woman is tucked in an idyllic seductive, but also somewhat threatening wall of white picket fences. We also see young boys wading, swimming and struggling through mud. And so, in one way, this shows becomes about elements, seductive and threatening, but also foundational elements of southern American or global diasporic life. Water, specifically, as a sort of baptismal element in the sky. All of these elements appear in the exhibition, both artificial and real, as symbols of spiritualism, aspiration and transformation. I think the images suggest [a] core fundamental resilience, radiance and full human agency that Black folks command, even in environments that tell them otherwise.

For you, what are the good and maybe not-so-good differences between presenting your photography in a white-walled blue-chip gallery compared to high-fashion editorials?

Tyler Mitchell: I am certainly interested in my images existing both on the published pages of magazines and in a commercial context, as well as in gallery museum contexts. And certainly, I want it to be acquired by people who want to have a serious and valuable dialogue around my work. All those things, I think, are possible. You know, I think that battle of asserting photography as an artform was one [challenge] in the past, [because] those artists would not be able to work commercially for fear of curators looking at them a certain way, and of being regarded as ‘less serious’. But my assertion right now is that as a photographer, this work that we do is a deeply enriching craft.