‘We called it the spirit of bombshell’ – the American photographer delves into the making of his new photo book, which features cis, trans, and non-binary icons of the New York scene 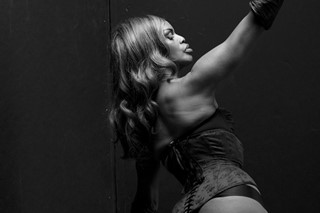 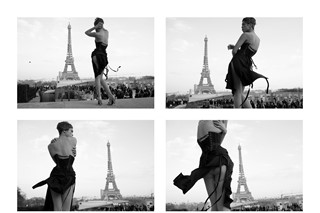 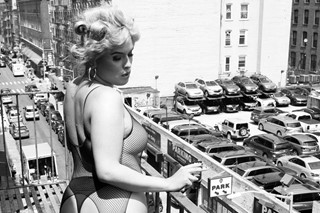 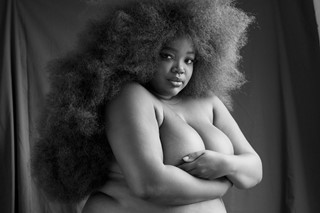 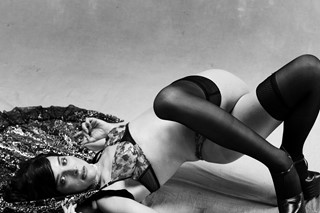 In 1931, Jean Harlow dazzled the world when she sauntered across the silver screen in Platinum Blonde. Her tresses, bleached to the palest shade next to white, signaled the arrival of a modern sex symbol, one who took European beauty standards to new extremes. Branded the “blonde bombshell”, flaxen-haired beauty set the tone for the modern femme fatale: the intoxicating enchantress who used what she had to get what she wanted.

As the decades went on “bombshell” became synonymous with voluptuous curves, pin-up models, and Hollywood stars, reaching its apex with Marilyn Monroe who famously introduced whisper singing as she breathily wished the president a happy birthday in a gem-encrusted nude dress – and nothing more. But as liberation movements came to the fore, it fell out of favour as a relic of patriarchal notions of femininity.

Yet the spirit of bombshell could not be denied; it continued to thrive in pop culture, taking various forms over the years, from the Pirelli Calendar and Charlie’s Angels to the video vixen and Baywatch – but American photographer Ethan James Green knew nothing of this. Growing up in an evangelical community during the 90s and early 00s, all things sex and sexuality were strictly verboten. “I didn’t participate in pop culture as a kid so bombshells weren’t included in my life until I was an adult,” he tells Dazed.

Beginning in the summer of 2021, James embarked on a 12-month odyssey with hairstylists Lucas Wilson, Jimmy Paul and Sonny Molina to create his second book, Bombshell (Baron) – an inclusive look at feminine sensuality in its most alluring form. Featuring photographers of friends and collaborators including artists Martine Gutierrez and Connie Fleming, actress Hari Nef, model Molly Constable, and  Interview magazine fashion director Dara Allen, Bombshell brings together a captivating array of cis, trans, and non-binary icons at the forefront of New York culture today. Here Green looks back at his journey into the heart of the 21st-century fox.

Could you speak about the inspiration to create Bombshell during the summer of 2021?

Ethan James Green: The project was very organic; it just happened, I didn’t think it out. We did a hair test shoot at my studio with my friend Lucas Wilson, a hairstylist, and Marcs [Goldberg], an art director and set designer. She’s one of the people I have photographed more than anyone else. She’s on the cover of my first book, Young New York. I worked with the two of them and we took these pictures. It was so effortless and fun. Marcs was giving a sensual bombshell type of character. She created who she was and I just documented it. We said ‘bombshell” over and over throughout the day.

It seemed to be a fun and successful formula. I was trying new things, and just wanted to do it with the next friend and the next friend. I would tell them to come to the studio and bring their version of bombshell. One of the hairstylists would sit them in a chair and they would go on a little journey with them.

Bombshell is a collaboration. The person comes in and they get to exist how they want. They pose how they want. I just follow and provide the picture. I shoot digital so I show them the camera back. That’s how I did Young New York too. It’s like you go on a journey with them and that’s my way of making something new, by really making it about the collaboration. I haven’t even asked myself what bombshell means to me. This project was about documenting what it means to them.

How did the project initially become a zine published by Dashwood Books?

Ethan James Green: When I shot Marcs with Lucas the first day, I knew this was my next body of personal work. Young New York was done some time ago and fashion had fully absorbed my life. I feel like if you are working in fashion, you have to put out personal work but I couldn’t just do anything. It had to feel authentic and genuine.

When I shot the first session with Marcs, I had the same feeling I did with Young New York: I had to get the fix again – you shoot a picture and you have to do the next one. You think about who to approach and how they will translate through your lens. I hadn’t felt that in a really long time and then I felt it instantly on this day. Once that happened I knew that if I had another book, this is it. That was the goal from the beginning.

I tried a new thing where I was shooting test Polaroids. I usually only shoot digital so the Polaroids were a nice way to switch it up. If I got stuck with digital, I would switch to Polaroid. Then something would happen that would give me a new launch point for digital and vice versa. I was going back and forth between cameras, something I had never tried before. I showed the Polaroids to David [Strettell] at Dashwood and we decided to publish them as a preview.

Can you share some of your favorite encounters making these photographs?

Ethan James Green: Some of the pictures that we shot are from an upstate trip I did with my friends Dara, Marcs and Cruz Valdez at the end of November/early December. Lucas did the hair. My boyfriend came up for it too, and my studio manager Chuy Medina was also there. On our way back we stopped at Bard; they have a garden outside of New York City where we did a shoot. They were doing hair and make-up in the van. Lucas must have done 30 different wigs throughout the weekend.

It was freezing and all the girls were wearing little pieces of fabric and dresses that they helped each other make. As it went on, it just felt like we got crazier and crazier. We called it ‘the spirit of bombshell’. The girls were wrapped in sheets and running around this garden back and forth. Dara was bending over, pretending to fall, and kicking the gravel in heels – and I had to be the one to call it because she would just keep going. That was the commitment that so many of my friends and collaborators brought to their character and to the pictures. It’s amazing as a photographer to have people give you so much in a picture.

How did ‘the spirit of bombshell’ give people the license to express themselves they may not have in other areas of life?

Ethan James Green: I think it was Dara who said, ‘When you wear a wig, it’s freeing.’ There’s something about wigs; you can just be whomever you want. There’s performance involved and it’s interesting to see everyone’s character. There are a variety of bombshell types throughout the book. It can get really campy and sometimes it’s a bit more of the girl next door, if you want to call it that.

The hair transforms. It frames your face and when you look into a mirror, that’s what you connect with. Hair changes someone so much. Hairstyles have different meanings, even a hair color change. Whenever I’ve needed a change in life, I get a dramatic haircut. It tells the world you’re a new person.

Your bombshells break through the narrow image that America has contrived of the blonde, white, slim yet voluptuous pin-up girl and offer an inclusive look at the femme.

Ethan James Green: You can’t do a bombshell project without being political. It’s a word that’s been reserved for a small group of people. But for me, bombshell is an energy, and it’s a choice. I don’t see why it should be limited to a single type of person. Everyone has their own version of it. My work isn’t limited to a certain type of person. Luckily a lot of my generation is that way where everyone knows the rules aren’t real. It’s all made up.

I have incredible collaborators who are my friends who surround me, and I can just say ‘bombshell’ and they come up with something incredible. While we are doing it, it doesn’t feel so political, it just feels like friends being creative together. For some people, if they want to do that while making a picture with me, that’s great but it doesn’t have to be super political for the person.

Could you speak about the importance of having the freedom to use photography to say whatever you want on your own terms?

Ethan James Green: I recognise it’s a really important time. I’m a white male photographer, and I’m not really paving a new path. My perspective isn’t necessarily new but I think it’s an exciting time in photography. In order to see new things, rather than the same things over and over again, you need to let new people participate whether that’s the photographer, the subject, or the collaborator behind the scene to get to the next step. You can’t do it without bringing people in who weren’t able to participate in the past and I think that’s exciting. Doing the right thing takes you to the destination where everything is meant to go.

Bombshell by Ethan James Green is published by Baron, and is available to pre-order now