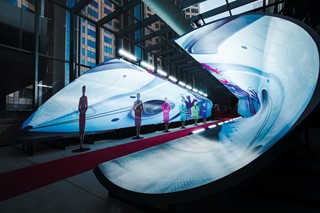 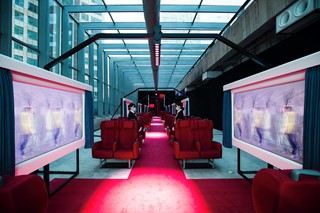 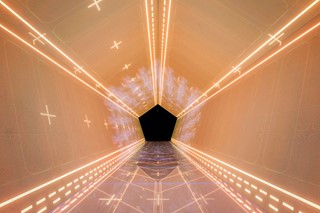 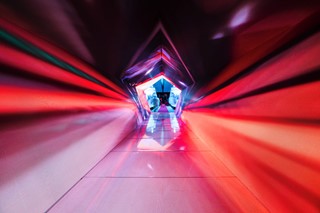 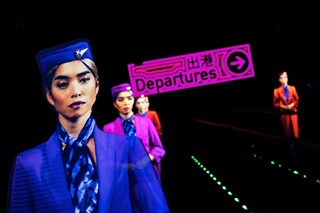 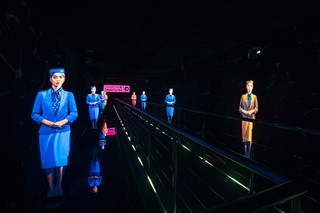 Whether it’s bringing Aphex Twin’s madcap musical vision to life, or morphing a Miley Cyrus live show into a hyperactive sensory assault, digital artist Weirdcore is the master of all things trippy and absurd. Now, the anonymous artist wants to take you on a voyage through time and space with his new digital exhibition at Beijing’s SKP-S department store.

Called ORIENT FLUX, the exhibition – made in collaboration with Kennedy London – is a multi-sensory stroll through a futuristic airport, a parallel universe of LED screens and lazers, holograms and sound-reactive visuals. Intended as a disorientating trip through China’s long and varied history, the exhibition is stretched across seven rooms, including a faux departure lounge and a trippy digital maze, where visitors can see footage of themselves in real-time on neighbouring screens.

There’s a labyrinth-like portal where visitors are ‘decontaminated’ by a wash of coloured lasers against a backdrop of atmospheric soundscapes, courtesy of music directors Goooooose and 33EMYBW, and a ‘departures gate’, made up of neon stretches of light and eerie holograms.

“The exhibition draws on the audio-visual terrain of 1970s and 80s sci-fi, absorbing, subverting, and recontextualising iconic cinematic tropes and graphic language,” a press statement says. “The result is a cohesive, escapist experience which is at once abstract and ambient, recognisable and otherworldly.”

ORIENT FLUX takes place until January 24 at T-10, a new culture concept space in Beijing’s SKP-S. But if, like us, you’re stuck at home in a catastrophically-managed government lockdown, you can check out the individual installations on Weirdcore’s website.

Too hot to handle: the sexiest art and photography projects of 2022
Art & PhotographyNewsAphex Twin