28May 2019
TextAlly Faughnan
Warhol on Basquiat9 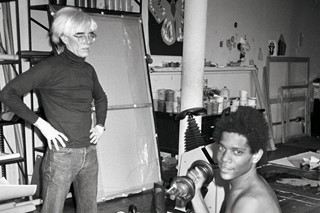 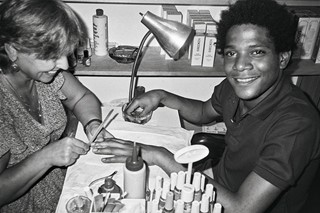 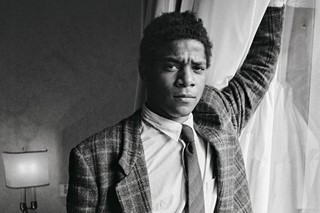 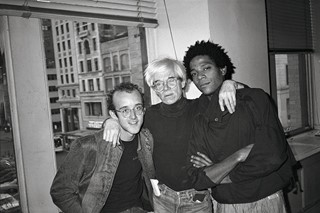 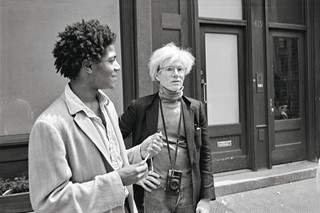 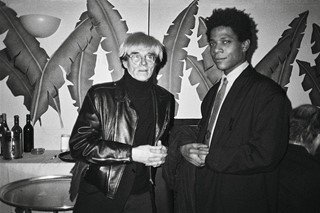 When the pop art icon Andy Warhol took the aspiring artist Jean-Michel Basquiat under his wing in the 1980s, neither of them could have expected the intimate and turbulent relationship that would unfold between the two. In recent years, photographs of Warhol and Basquiat have resurfaced, but there have always been people who have criticised and questioned their friendship.

Now, a new book, Warhol and Basquiat, published by Taschen in collaboration with the Jean-Michel Basquiat Estate and the Andy Warhol Foundation, exposes the world to hundreds of never-before-published images taken by Warhol in the years that he knew Basquiat. Michael Dayton Hermann from the Andy Warhol Foundation selected these images from Warhol’s collection – accumulating over 130,000 photographs taken on his 35mm camera – and placed them alongside quotes from Warhol’s diary, giving “a voyeuristic glimpse” into the relationship between the two artists, for all it’s good, bad, and, at times, weirdness.

The book has been released 32 years after Warhol’s death in 1987, when Basquiat also sadly died from an overdose the following year. Spanning the six years prior to this, Warhol and Basquiat’s friendship was both strengthened and tested, and can now be explored through the images and anecdotes within this book.

Looking through these personal photographs and diary excerpts documented in Warhol on Basquiat, we unpick the relationship between the two artists, to show the truth behind it.

Before Basquiat became a name in the art world, he dropped out of school aged 17 and started his career tagging the word SAMO on the streets with fellow artist and friend Al Diaz. In a diary entry, Warhol recalls seeing him as “the kid who used the name ‘Samo’ when he used to sit on the sidewalk in Greenwich Village and paint T-shirts, and I’d give him $10”. However, it wasn’t until art dealer Bruno Bischofberger discovered Basquiat painting in lower Manhattan that his career really kicked off.

When Bischofberger introduced the two in 1982, Basquiat finally got his chance to impress his idol – a surreal experience for the young artist who had always looked up to Warhol. However, their first encounter was in fact a few years earlier at a restaurant in Soho, when Basquiat sold Warhol a postcard he had made with artist Jennifer Stein. Later at their first lunch meeting, Warhol recalls that Basquiat “went home and within two hours a painting was back, still wet, of him and me together”. This painting, titled “Dos Cabezas” (1982), ignited the friendship between the two artists and started their journey of artistic collaboration.

THE ARTISTS INSPIRED EACH OTHER CREATIVELY

As the friendship between the two artists developed, both socially and creatively, the pair began creating collaborative work. Particularly from 1984 onwards, Warhol would make notes in his diary about when Basquiat would come over “to work on one of (their) joint paintings”.

Their collaborative works merged their two styles: Warhol’s recognisable pop art technique juxtaposed Basquiat’s raw and unpredictable approach. They made several “Untitled” works together but one of their most well known collaborative pieces is “Ten Punching Bags (Last Supper)” (c. 1985), which was a playful statement against ideological oppression in the art world.

However, despite their collaborations, the two still existed in different worlds of art. In the 1980s, Warhol was already an established and respected artist, while Basquiat was only emerging as a name in major New York art institutions. Even after featuring in his first major show New York/New Wave, exhibited at MoMA PS1 in 1981, he still felt alienated from elite art circles in the city and this began to cause tension within his friendship with Warhol. Eventually Basquiat got his first solo exhibition at the Mary Boone Gallery in 1984 and the young artist later showed his appreciation of Boone's support by saying: “Don't worry, Mary, I'm going to make you much more rich and famous than Julian (Schnabel) ever would,” after some of Boone's big artists had left her gallery. As Basquiat became more famous, the artists were able to grow creatively together and produce some of their best collaborative work.

THEIR FRIENDSHIP WAS CONSTANTLY CRITICISED

Everyone had something to say about Warhol and Basquiat’s friendship. Critics often thought Basquiat was latching onto Warhol’s established fame, while others claimed Warhol was using Basquiat to stay relevant on the back of the young artist’s popularity. Even artist Ronny Cutrone said: “It was like some crazy art-world marriage and they were the odd couple. The relationship was symbiotic. Jean-Michel thought he needed Andy’s fame and Andy thought he needed Jean-Michel’s new blood. Jean-Michel gave Andy a rebellious image.”

Although the authenticity of their friendship was questioned, by looking at Warhol’s diary entries, it seems like there was a genuine bond between the two. Warhol would often write words of encouragement and praise, saying in a 1984 entry: “I think he’s the best, I really do.” Despite the criticism, by looking at the vast amount of images showing moments and memories shared between the two, it is hard to believe that the two artists were simply using each other for fame and fortune.

WARHOL WAS FASCINATED WITH BASQUIAT’S RELATIONSHIPS

Warhol has often been noted for his sense of voyeurism, awkward demeanour, and dislike for human contact. Although he struggled with his own personal relationships, it seems like the iconic artist was more fascinated with Basquiat’s love life and sexual escapades than his own. Through Warhol’s diary entries, he documented the young artist’s romantic history from 1983 until his death in 1987, often noting when he was in love, had several girls on to go, and when he kissed Madonna in a New York gentlemen’s club, even though they were no longer dating.

The intimacy of his relationship with Warhol was also being questioned in circles around New York. One of Basquiat’s girlfriends, Suzanna Mullouk, even noted: “Andy, like many people, was very seduced and enamoured by Jean-Michel.” However, Warhol recalled in his diary when another of Basquiat’s girlfriends Paige Powell questioned him: “Are you starting up your gay affair again with Jean-Michel?”, and Warhol, on the defence, responded: “Listen, I wouldn’t go to bed with him because he’s so dirty.” This, coupled with Warhol’s apparent disinterest in sex – he was once quoted as saying, “Sex is more exciting on the screen and between the pages than between the sheets” – points to a relationship that was purely platonic.

When Basquiat was only seven-years-old, his parents seperated, and he countinued to live with his father Gerard Basquiat in Brooklyn, New York before moving to Peurto Rico in 1974 due to his dad's job promotion. This is where Basquiat's relationship with his father started to strain and he would often run away from home, with Gerard stating: “Jean-Michel did not like obedience. He gave me a lot of trouble.” Even when the family was relocated back to New York the following year, Basquiat's relationship with his father was already breaking and the young artist officially left home at 15-years-old. Perhaps Basquiat's strained relatioinship with his birth father is what caused his friendship with Warhol to take on this paternal role.

As the artists spent a lot of time together, working out, painting, and going to parties, they inevitably got very close. But with a 30 year age difference between the two – Warhol was born in 1928 and Basquiat was born in 1960 – their relationship often crossed the line between friends to a father-son connection. Friends of the pair also made comments about the parental relationship between the two, including director Tamra Davis confirming: “Andy really was there for him”. And artist Fab Five Freddy testified: “Andy was really giving (Basquiat) great advice.”

Warhol was also there to support Basquiat throughout his hard times. One of Basquiat’s girlfriends Paige Powell would turn to Warhol for advice about her partner’s addiction issues, noted in Warhol’s diary in 1983: “Paige is upset – Jean-Michel Basquiat is really on heroin – and she was crying, telling me to do something, but what can do you?” However, when the young artist turned to Warhol himself to talk about his struggles, he wrote: “Jean-Michel came by and said he was depressed and was going to kill himself and I laughed and said it was just because he hadn’t slept for four days.” It becomes evident through these written entries, as time went on and Basquiat was struggling to recover from his depression and worsening addiction to heroin, he was starting to distance himself, and Warhol noticed: “Called Jean-Michel but he hasn’t called me back, I guess he’s slowly breaking away.”

THEY FELL OUT OVER THEIR FAILED COLLABORATIVE EXHIBITION

The relationship between the two artists was inevitably turbulent and it was after their joint exhibition Paintings shown at Tony Shafrazi Gallery in New York in 1985 that they had their biggest fallout. The show was slandered by critics and torn apart by the media, which caused Basquiat to feel like his work was not as appreciated as he thought it would be.

This caused tension between the artists, as Warhol recalls: “I asked him if he was mad at me for that review where he got called my mascot, and he said no.” Even before the exhibition, Warhol wrote: “I’m just holding my breath for the big fight he’ll pick with me right before the show of our collaboration paintings at the Shafrazi Gallery.” This failed exhibition meant that the two artists barely spoke afterwards and affected the final years of their relationship.

Despite this, the fact that Warhol and Basquiat were genuine friends cannot be discounted. After Warhol’s death in 1987, Basquiat seriously struggled to keep up with his artistic lifestyle, turning back to his destructive behaviour, and endorsing his heroin addiction to occupy himself. This caused his tragic death the following year, where he was found dead from an overdose at the young age of 27. Nevertheless, both artists created great bodies of work, which are still shown together all around the world, keeping their friendship alive through their solo and collaborative art.