1May 2019
TextDazed Digital
Diane Arbus: In The Beginning6 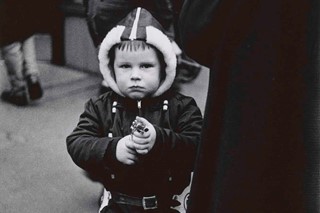 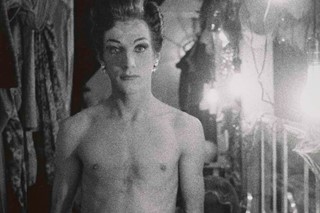 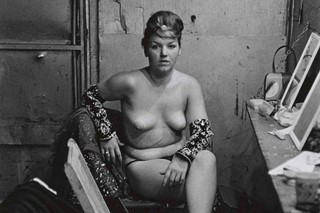 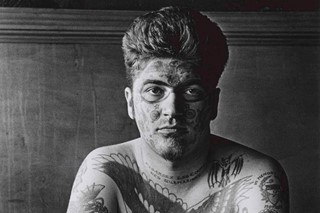 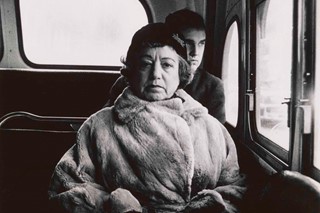 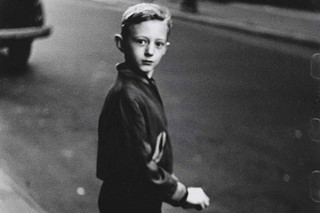 From oily black and silky ivory gelatin textures, a petite female figure emerges within the dusk, gently swirling a mop over a lacquered wood apartment floor. She has an arched back, svelte, attenuated arms and a comparatively large head. Wearing a dopey expression, her eyes gaze bluntly, confidentially into the camera lens. “Miss Makrina, A Russian Midget, In Her Kitchen” (1959) is an exemplar of photographer Diane Arbus’s archetypal subject matter, which has proven divisive since her artistic inception.

Writer and cultural critic Susan Sontag famously approached Arbus’s work with caution, arguing that she captures “people who are pathetic, pitiable, as well as repulsive”, but “does not arouse any compassionate feelings”. Visiting the retrospective of her work currently on view at London’s Hayward Gallery is like seeping into the iridescent, dusty crevasses of her magical, messed up Southern Gothic imagination. Across more than one hundred monochrome photographs, we catch a glimpse into her twisted, morose psyche; comprised of freaks, misfits, and oddballs, who lurked on the stoop of a brownstone in mid-twentieth century Manhattan.

Nearly all of the works are exhibited on their own raised, gun-metal grey plinth (apart from the final room in the show), which gives the sensation, simultaneously, of walking through the dense sprawl of phallic, New York skyscrapers, and a spookily symmetrical graveyard, demarcated with towering tombs. The atmosphere feels haunted, chilling; a corpse’s chest collapses from decay; an elderly woman in a hospital bed with sheer skin and spiralling, worm-like veins, gasps for air; her face hollowed like a sneering, stone gargoyle; another subject screams and holds her hands over her eyes as cherry red blood drools from her fingertips. Death. Pain. Suffering. Arbus pointed her lens at infected, decomposing bodies, frozen in their respective struggle, their grief.

As I walk through the labyrinthine maze, Sontag’s criticism abounds. Many of the pictures shimmer with objectification, although Arbus claimed that her interest in those on the fraying margins of American society stemmed from their apparent lacuna in artistic representation. It’s like she was trying to wrestle out of the queasy mire of her own – relatively comfortable – socio-economic position, but instead continually teetered along the fine line between celebrating and reinforcing ‘difference’.

In “The Madman from Massachusetts in an Empty Bar” (1960), a topless, one-eyed rogue hovers in front of a dusky backdrop. While “A Jewish Giant at Home with his Parents in the Bronx” (1970) is forced to hunch over within the (seemingly deliberate) claustrophobic composition. Nearby we see “A Mexican Dwarf In His Hotel Room” (1970), poised in just a moustache, angled fedora, and a furry, snow-white towel. The decision to retain the works’ original titles further attests to the estrangement at play here: words such as ‘giant’, ‘dwarf’, ‘madman’, ‘female impersonator’ carry the thickness of a label, as though what we are looking at is really something else. But another part of me feels sceptical of Sontag’s reading.

The recent rise of ‘woke washing’ – where large corporations are cynically adopting ‘radical discourse’ in order to sell their products – has led progressive political commentators (such as the popular US-based podcast “Red Scare”) to view hyper-woke articulations as increasingly vacuous. These burgeoning ‘post-woke’ positions parody the right wing in order to ‘troll’ the centre-left, which they consider being diluted with rearguard liberalism. With these perspectives in mind, Arbus’s photographs perfuse a similar militancy and proto-‘edgelord’ harshness.

There is an apparent awareness of her oeuvre’s ominous, apolitical qualities, and the show also contains a disproportionate amount of cooling, inoffensive subject matters. These are the many images of men in drag caught (un-) dressing, applying sparkling eye-shadows and lethal, sharp eyeliners; slipping the skin of their corporeal identities and leaving them on their dressing room floors. A disquieting, infantile innocence is also emphasised: a disgruntled pixie is the subject of “Girl with a Pointy Hood and White Schoolbag at Curb” (1957). Adjacent to her a hell-raising wax murderer dismembers another doll with an axe on Brooklyn’s Coney Island, which we can imagine to be filled with young, adrenaline-junkie nymphs clasping melting ice creams and running amok on fairground attractions. The exhibition attests to Arbus’s alchemy in the darkroom: her ability to conjure up snapshots of sinister sensuality.

Many maintain that Arbus was a visionary photographer – the Metropolitan Museum of Art referred to her as one of the most ‘influential and provocative’ artists of the 20th century. Gazing at “Child with a Toy Hand Grenade in Central Park” (1962) it is hard to disagree with this institutional lore. He glitters with seraphic intensity; resplendent in his gangly, bow-legged body, knobbly knees, zoned out, pained expression, and deep, distended eyes. A subtle unusualness bleeds into every corner of Diane Arbus: In The Beginning – it’s teething with characters who gently flirt and toy with their otherness – through biting a breast, or wearing an utterly indescribable countenance, or just being wonderfully, unconventionally beautiful. Her compelling knack for distilling woozy weirdness through film reverberates within popular culture. In the final room, we see her famed “Identical Twins” (1967), who inspired the blue-tulle clad girls in Stanley Kubrick’s horror movie The Shining (1980). While our aforementioned cherubic prankster, clasping his plastic weapon, looks like he could have been cast in Harmony Korine’s Gummo (1997), eating spaghetti and crimson tomato sauce in a turquoise bathroom or donning candyfloss pink Bunny Boy ears as the black-metal soundtrack hazily thrashes in the background.

“The exhibition attests to Arbus’s alchemy in the darkroom: her ability to conjure up snapshots of sinister sensuality”

Korine’s Gummo also oozes with the spirit of Southern Gothic, softly permeating the isolation of his characters, who waft around a tornado-stricken town with the airy, listlessness of tumbleweed – perpetuating the same trajectory as Arbus and other masters of the dark, lonely arts before them. Irrespective of the fairy-tale enchantment of the exhibition, I cannot help but sense a desolate sadness skulking within the shadows. Arbus took an overdose and died in her home in 1971. Sontag viewed this as the culmination of her work as an exploitative voyeur; her suicide being a violent, antidotal act in order to prove (to the public and her critics) that her interest in the mentally ill and other ‘marginalised’ groups had always been genuine.

Many have argued that creativity can help us see beauty in solitude (such as the writer Olivia Laing in her recent book, The Lonely City: Adventures in the Art of Being Alone, published in 2016). Undoubtedly, societal severance-as-art transmogrifies a negative experience into a tangible emotional outlet, comforting both the creator and an audience grappling with comparable feelings. But Arbus’s machine frames, dissociates, segregates; proving to be as morally murky as her photographs’ pearlescent, grayscale palettes. These works are ravelled by an impossibly distant, melancholic grace; where alienation is the aesthetic ideal; brutally sanctifying a psychological pain that strips people of their happiness, wellbeing, and fatally, their lives.

Diane Arbus: In The Beginning runs at London’s Hayward Gallery until 6 May 2019