From Robert Mapplethorpe to Keith Haring, and Cookie Mueller, Don Herron’s rarely seen photos take us closer to New York’s East Village artists than ever before 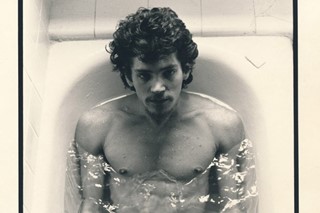 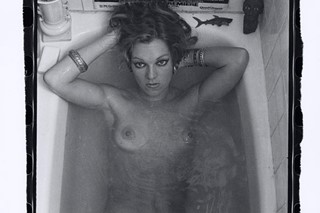 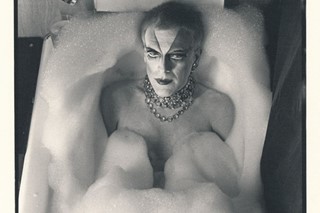 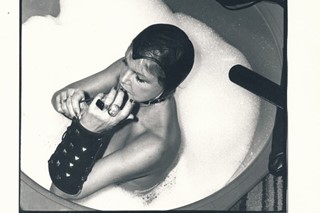 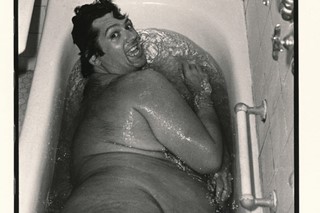 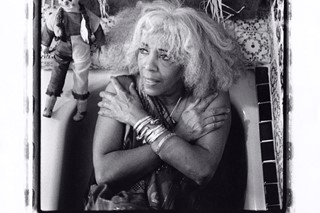 In November 1982, a 24-year-old, career budding Keith Haring climbed into his bathtub to be lensed by photographer and friend, Don Herron. Appearing for the camera half-naked, the resulting image gives us access to Haring in a moment of blissful intimacy, in what is now arguably one of the most personal portraits of Haring ever taken. Everything from the bathroom’s walls that crawl with Haring’s iconic raving men to the rubber duck that floats near his waist hint at a young artist whose innocence was beginning to merge with the intensity of the outer East Village art scene which he would soar into just years later.

It’s this intimacy that transcends Don Herron’s entire Tub Shots series which consists of 65 portraits of famous artists in their bathtubs: a space the photographer liked for its arc and its art historical references. The series, which has remained largely hidden until now, will go on show at New York’s Daniel Cooney gallery from September 13 – November 3. “The Haring image is my favourite,” reflects curator Daniel Cooney. “There is a sweetness to the photograph and of course we know that he quickly developed as a hugely successful artist then died very young. It speaks volumes for Haring’s generation.”

“This work has never been shown in such depth, so it will be a new discovery for most audiences. I hope that people will understand the subtexts of community, loss and perseverance” – Daniel Cooney

Taken between 1978-1993, the series acts as a zeitgeist for an entire generation of artistic luminaries who revolutionised the contemporary New York art scene and art as we know it today. From Haring’s young innocence to lensing New York's most notorious dominatrix of the 1970s, Belle Du Jour, and portraits of sex-positive artist Annie Sprinkle, the series reaches over time and space. “The most important aspect of the series is the community and the connections within it,” states Cooney. “There are 65 portraits in the show and the individual stories are interwoven, creating a landscape of the cultural times.” But exactly how Herron knew each subject, and was able to enter such intimate spaces with them remains largely unknown. “It’s a mystery,” reflects Cooney. “The guardian of his estate doesn’t know exactly how he met his subjects and many of the subjects don’t remember how they met him. The ones who do remember tell me that they were introduced through another sitter but no one seems to have known the artist very well.”

Just like Tub Shots, Herron as a photographer also remains widely unknown. “I think the impact of this work remains to be seen. It has never been shown in such depth so it will be a new discovery for most audiences. I hope that people will understand the subtexts of community, loss and perseverance.”

To launch the show, below five artists from Tub Shots reflect on being photographed by Herron and the importance of the series.

“My first contact with Donald came through a telephone call. He wanted to photograph me for a series of Underground Celebrities he was creating. We set up a meeting, I recall him visiting me at my residence on Saint Marks Place where I was living with another photographer, Timothy Greathouse.

Donald showed me what he had captured for the series and explained how the arch of the bathtub was important as it referenced the arches framing saints in renaissance paintings. The Village Voice would be printing the series and he was somewhat disturbed that the SoHo News pulled the same piece because he had also approached the Village Voice.”

“I met Don through Matthias Mohr, who I had performed with at Club 57. This photo was taken at one of the most challenging points in my life – for 10 years I’d been on a steady and creative career climb, and was about to premiere a new work about the aerialist Barbette and Jean Cocteau at BAM’s Next Wave festival. I was also on an emotional downslide, having lost a steady slew of friends and lovers beginning in 1982, the most recent being my design collaborator and lover Huck Snyder in February of 1993. Since I was diagnosed in 1989, I was also trying to stay alive, and the work became my focus and salvation. As Barbette, I was performing aerial tight wire and trapeze, which were deliberate metaphors for my life during that horrible and exhilarating time.”

“I got a call from a friend, maybe Mapplethorpe, introducing Don and saying he was doing a MFA in photography at some Texas university, photographing people in bathtubs, and no one in Texas would consent to do it. But Robert and Divine and Cookie had said yes, and would I also? Don came by my duplex and he was a sweet man, so he climbed onto the back of the upstairs bathtub and he shot a bunch of photos. He then asked if I could recommend others to shoot, and I sent him to either George Stravinos or to Victor Hugo. By the time Don was done he had gotten a pretty full and accurate portrait of Bohemia in New York City in the period.”

“Somehow at the time I must have met Don, although I can’t recall. The only thing that may have happened, he may have approached me for sex and then asked to take my photo. I have no recollection of him or the photo shoot.

At the time, I never cared for photos taken by other photographers, not even Mapplethorpe’s photos of me. I realised how critical I was looking at my image, so I probably would have seen this photo and not liked it. Looking at the photo now, I don’t mind it. It’s not a typical Peter Berlin photo that I would have taken of myself. I like everything but the dick and my expression in the face. But I have no recollection at all of him or this shoot. I have a terrible memory.”

Tub Shots will go on show between September 13 – November 3. You can find out more info here