The story of Keith Haring, as told through his iconic art workThe New York-based artist set the world alight with a compulsion to make work with a cause. As his retrospective opens at Tate Liverpool, curator Tamar Hemmes traces his incredible legacy
LA’s Latinx community — autumn 20188 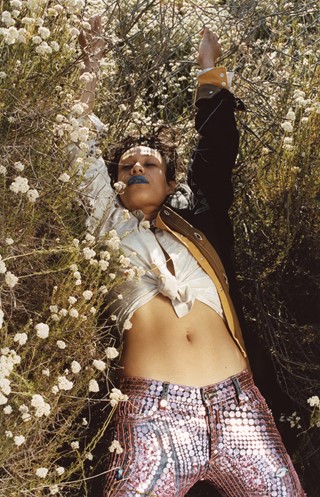 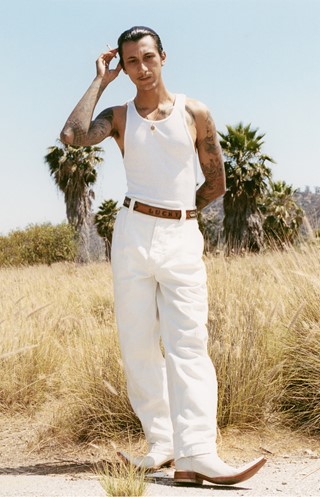 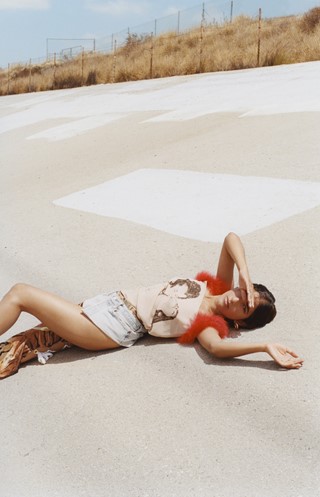 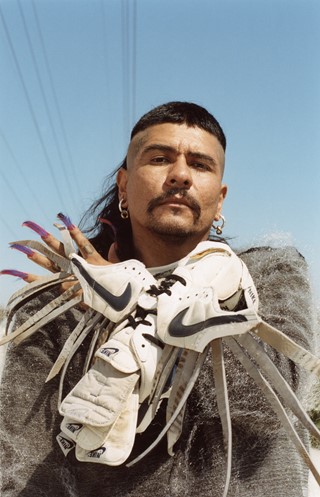 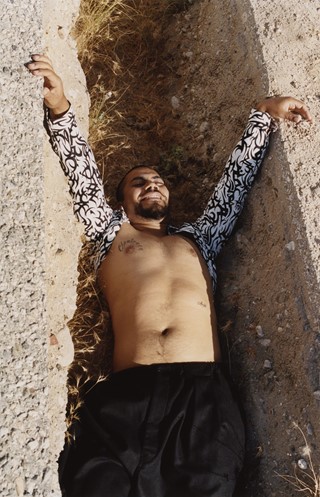 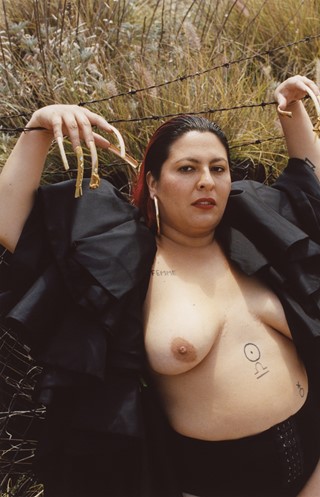 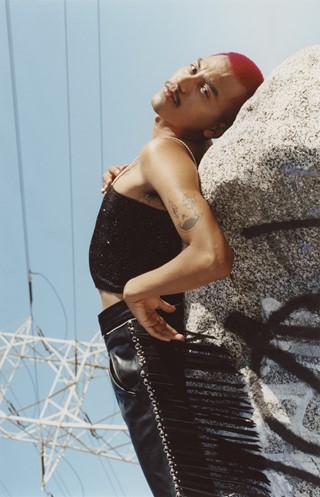 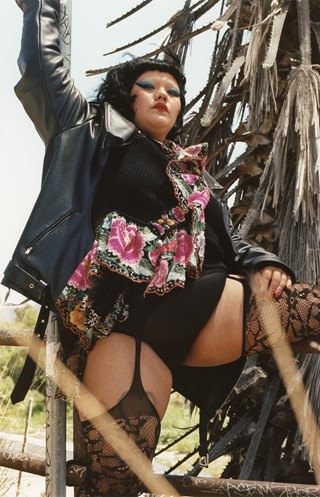 When Rafa Esparza was invited to show at the Whitney Biennial in 2017, he and a small team of collaborators began to build. First, they made adobe bricks, using an ancient indigenous technique passed down by Esparza’s father – mixing the clay, horse dung, hay and water outdoors next to the Los Angeles river. Then they transported the resulting structure to New York, where, in the Whitney’s famed white walls, with the smell and warmth of the earth surrounding them, visitors were transported elsewhere. Inside, they could see the work of other artists Esparza had worked with: a gallery inside a gallery. “I’m tired and bored of seeing the Eurocentric POV reified,” he says of his work with LGBTQ people and people of colour. “It shapes how culture is made, what it’s supposed to look like, and (ideas about) what’s important to be seen and valued.” Esparza seems to work as an unofficial leader of the Latinx arts community in LA, uplifting other artists in the scene. He aims to re-centre the lives and work of people of colour that are so devalued by the current culture – what’s more, he does not seek the establishment’s approval. “I have had opportunities to show outside of California,” he explains. “But I’m just not interested in the traditional circuit of Los Angeles to New York to Europe. I’m looking south. Always looking south.”

An hourglass, heavy chain and bright-red acrylic nails jostle under a lightning bolt-strewn purple-haze sky. Mario Ayala’s surrealist, airbrushed paintings are not an aesthetic you would expect to find in a white-walled art gallery – and that’s precisely the point. “Art should never be hierarchical,” he says. “I think all forms of art hold some sort of substance.” Ayala is more interested in connecting with people who might not normally set foot in a gallery. As a child, he was first exposed to art through his dad, a truck driver: “I would stay up waiting for him; he would always give me drawings he had made of dogs or trucks on the back of his workload receipts made with a ballpoint pen. Those were the first things I considered art.” Last year’s show Pen Pal explored themes of loss and heartbreak within the prison-industrial complex, complete with a letter-writing station for visitors to send letters to inmates across California. “I’ve always been interested in histories (that are) culturally significant for me,” says Ayala. “I wanted to scratch the surface of some of these phenomena that seem as outrageously discomforting to myself as they do to others.”

San Cha, a musician and artist, had a childhood obsession with the Mexican singer Gloria Trevi, who wore ripped tights and chunky combat boots, and sang about how she liked to “walk with (her) hair down... against the wind”. It’s a fearless attitude that has certainly influenced San Cha’s approach to her music – and her name. ‘Sancha’ is the Mexican slang word for mistress but, in a perfect encapsulation of the virgin/whore dichotomy that rules over so many women’s lives, she split it in two to turn it into something divine. (‘San’ means saint.) Having started singing in a church choir at the age of 12, Cha reveals how her perspective changed when she performed aged 22 at an art opening. “My drag mother, Persia, changed my life,” she says, describing how she channels drag’s amplification of gender and movement through her work. “I’m inspired by how (drag singers) can captivate an audience, with just one song that they’re not even singing!” Her music, a mix of traditional Mexican styles with pop-rock, is sung in Spanish and English, but Cha prefers to describe her music simply as ‘Latin’. “What label do I need other than (the one) I was born into?”

“My introduction to dance came through my parents, who migrated from Mexico City. They’re amazing cumbia dancers,” says multidisciplinary artist Sebastian Hernandez. “Although I would meticulously mimic Britney Spears watching her videos on MTV!” This creative tension is evident in much of Hernandez’s work. Formally trained in both visual arts and dance practices, their interest in performance was piqued after Rafa Esparza invited them to collaborate on a piece titled “Chino, Indio, Negro”, which commemorated the Chinese Massacre of 1871 in LA. In the piece, Esparza was tied down to the pavement while Hernandez covered his face with plaster bandages, then threw firecrackers at the resultant mask. Hernandez’s own performances are a mix of choreography, endurance test and installation art: “This thing (we call) ‘performance’ is an unnatural phenomenon that we as humans have created to break out of a hegemonic norm (designed to) control human behaviour. Performance allots time in my life to bring together ideas about freedom and power so that other people can experience and feel a little bit of that.”

“It started as a joke,” says Gabriela Ruiz, the Chicana performance artist and designer also known as ‘Leather Papi’, on the birth of her moniker. “My best friend was taking pictures of me in a harness and I said, ‘I’m a leather daddy,’ and she said, ‘No, you’re not a leather daddy, you’re a leather papi.’” The rest is history. “You know when you’re out and people recognise you and call you by your handle? I’m glad I didn’t have a crazier one, like ‘@CUMPAPI420’,” she laughs. Ruiz’s work celebrates people who feel like they don’t belong and instead have to create their own worlds to survive. As such, she often obsesses over the theme of home: there was HAUS, where she recreated standard rooms in a house (kitchen, bathroom, living room... dungeon) in squelchy primary colours, and her guerrilla installation/ performance in front of the famed Museo del Palacio de Bellas Artes in Mexico City, involving a red, frilly vanity set and blue rope-bound chairs. As the world continues to move to darker places, it’s easy to get lost. But, as Ruiz says, “All we can do is contribute in a positive manner – and hope we can better our environment.”

“I regularly ask myself, ‘What is the function of art in our world?’ I’m interested in direct action and remembering how to utilise space again,” says Maria Maea, whose work ranges from performance and sound art to kinetic installation. Her art is imbued with a sense of magic and ritual, with yellow masks made from her own face hanging from orange tree branches, altars made of earth, fire and mirrors. “My work is about existing as a feminine body within the oppressive structures that seek to limit my magical lens on the world.” Maea was approached by Rafa Esparza, a regular collaborator, after a performance with choreographer taisha pagget’s dance project WXPT. “We connected over our hood sensitivities and deep desires to brown the spaces we existed in,” explains the artist, who has been part of his adobe-making team ever since. “The adobe spaces have been revolutionary on a collective and personal level.” In fact, community plays an important role in Maea’s life both inside and outside of her work. “There are radical ways in which we can care for each other and our city outside of the structures that tell us there is only room for one,” she asserts. In other words: “Bitch, you don’t wait in line to start a revolution.”

“I’ve been writing a lot about my parents’ youth experiences in their respective countries, Mexico and Guatemala, as well as their immigration stories,” says director Jazmin Garcia of her films. “I write these memories down, and expand on their footprints, often creating bio-mythologies of my parents’ lives. They are heroes to me, with all their sacrifices, successes, and fuck ups.” Her short film #Commute juxtaposes the lives of two Guatemalan women, one an immigrant dealing with wage theft at her job, the other a first-generation woman who helps disenfranchised workers organize. “It’s imperative that more immigrant narratives are shared in (the) media, because people have such twisted notions of who deserves to be human, and who does not.” Garcia also hosts an online radio show called “Como la Flor,” named after the Selena Y Los Dinos song, which broadcasts the most romantic, saddest songs in Spanish. “(Como La Flor) came out of a need to take an overflow of grief, loss, and pain, and refocus that energy into doing something productive. (It’s) a zone where I’m allowed to pour out my emotions and be melodramatic as fuck,” she says. “It’s also a place to reminisce about your parents and your abuelitos, especially if you’re a first generation pocha like myself.”

Ruben Ulises believes in the power of old clothes, their lived experiences. They needn’t be the clothes of someone famous or in power, either — an old sock works just as well. “I found (a white long sock) washed ashore on Santa Monica beach. I like to think it had all the energy of the waves of the people passing through it, and of the waning and waxing of the moon for the many days the sock stood washed up like a jellyfish.” This collective energy, literally “powers up,” or makes up his sculptures and installations, which often feature pieces of clothing wrapped around found branches and other bits of nature. “I first started to use men’s clothes in my work as a means to deconstruct very high macho notions of masculinity that are still very dominant in my Mexican culture,” he explains. “I noticed that Mariachi hats have sequins in them, (and) it brought me back to how we let (some) men use shiny (things) to enhance their masculinity. Yet queer, brown bodies are still being assaulted by our simple act of jovial public queerness in fake nine-inch Louboutins studded in make-believe Swarovski.” Soon, the clothes themselves turned into vessels, conduits for the artist’s energy. “As I started to work more with men’s clothes, the idea of feminizing men’s clothes fell to the wayside. At the end of the day, (clothing is) all energy and a form of expression that shines a certain performative aspect of ourselves, that we intuitively falter on.”