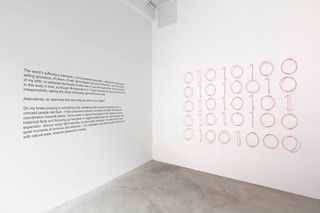 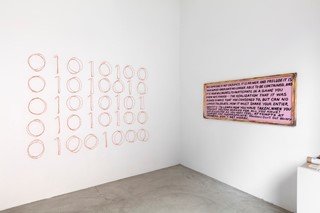 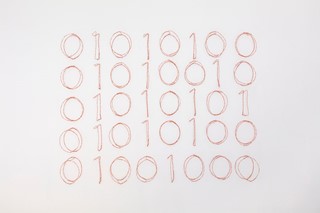 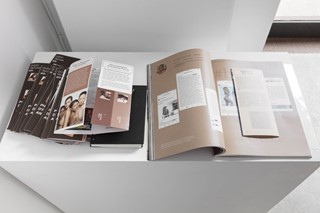 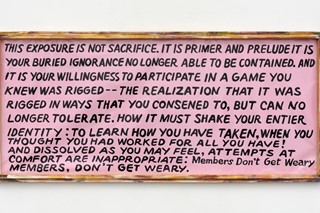 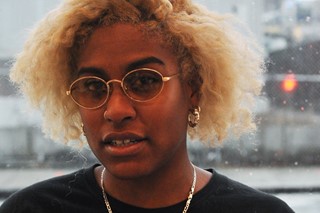 Mandy Harris Williams’ transition into the art world was an obvious step. The 29-year-old writer, artist, speaker, and educator fit perfectly into a space that encourages crossing boundaries, commentary, and creative rebellion. While poetry and performance work has been flourishing in galleries, Williams takes things further by making cultural criticism a performance or project in its own right.

“I was actually a classroom teacher for a really long time,” the LA-based artist explains. “I knew I wanted to be a writer. I wrote very, very long-form essays – personal essays about my experience in the classroom, and how that maps a larger conversation about race and privilege.” Inspired by writers like James Baldwin and Alice Walker, she found the possibilities for 30-page essays were limited, so began to think how to get her ideas to her audience. “Part of my challenge of leaving my full-time gig and entering a more creative landscape has been to think about how to be more experimental in text work. How can I increase impact, increase distribution while still trying to make similar statements? I'm sharing a lot on Instagram. It's this broader question of how can I use different forms of text or different presentations of text to get the message across.”

“I think psychologically people congratulate themselves quite a good deal for wanting to fuck Beyoncé?” – Mandy Harris Williams

Williams’ Instagram account @idealblackfemale is how she made a connection with the curator Laura Hunt at New York gallery Paula Cooper, where Williams was included in a two-person show which opened last week. Williams uses Instagram to look at how the app is structured; how algorithms are structured. In a very modern take on institutional critique, she pulls things apart from the inside. She makes us aware of social media’s failures by highlighting how posts are (or are not) available in feeds. She points out how the recommended accounts on social media can reflect racist, sexist, and heteronormative ideologies. The result is we dissect and rethink what we are doing as we swipe.

“I definitely think of my criticism of Instagram as a duty and a right and a responsibility of being an Instagram citizen. Instagram is a private company. It's not like a government where we have a Bill of Rights or a really structured understanding – yet it is a platform that has enormous influence. We have had one Facebook president in Obama. We've had a 4chan president in Trump. I think social media is going to have huge, huge influences on our social and political landscapes. So, it certainly is a conversation that we need to be having beyond Kim Kardashian's selfies, on what is the impact of what we post? How do we create political space in a private digital space? How does the history of algorithms tell us what is acceptable; what is popular; what is desirable; what is meaningful; what is deserving of attention?”

This take on highlighting the imbalance in media structures also feeds into her talks and artworks. Aesthetics were not the natural home for Williams, which has made her approach extra interesting. She has been creating a series of pamphlets that mimic public service leaflets – something you’d pick up in a doctor’s office for example. The retro normcore design and take on imagery is echoed in her approach to text. This is dissecting the structures of white supremacy one easy to consume step at a time. “I've definitely been very interested in the question of what is the design – or even what media – allows my message to be the most attractive, most compelling. What are the visual things that I can do to draw people into the text? The visual is always an invitation to the text, for me, at least. I'm very much focused on the goal of getting the message across and using design, art, art spaces, and art communities as tools or methods.

Her openness and questioning have made her a favourite of designers, curators, and creatives looking to reform their creative context. She was recently invited by Hard To Read to do a talk at The Standard in Los Angeles. Her lecture began with a confession of her own feelings around beauty and feeling unwanted. “I've been almost obsessed with this historical, sociological study of why I and those around me – who I see so much beauty in – have not gotten the love that I see them deserving of. That led quite naturally to this idea of desirability privilege, beauty privilege. I think it's something that really comforts people to say that they're able to be attracted to people of different races. I think psychologically people congratulate themselves quite a good deal for wanting to fuck Beyoncé.”

Inspired by a chapter on “media bliss” in self-help writer (and Oprah’s life coach) Martha’s Beck’s book Finding Your Own North Star, Williams realised self-criticism wasn't the way forward. “I needed to be a lot more aggressive about finding brown women, finding women with kinky hair, finding queer people, finding fat people, finding people who were not being fed to me were people I wanted to see for myself and like open a greater visual vocabulary for myself and build, at least, a consumer relationship with folks who deserve to be seen.”

Williams also invites us to take action – to #brownupyourfeed. It is not just about awareness. She invites her audience on what to look at, who to follow, how to think about our consumption and awareness of media. In Williams’ world, we are not passive but are invited to take part and change things.

Mandy Harris Williams is on show at Paula Cooper until March 10, 2018. She is also hosting a workshop at Women’s Center for Creative Work, Los Angeles February 28