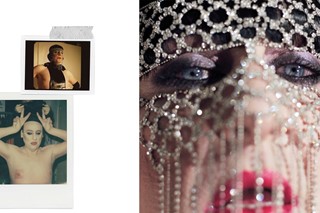 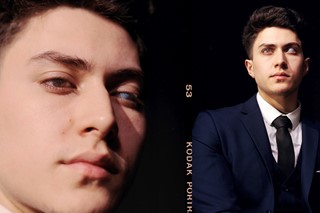 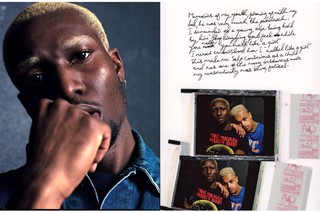 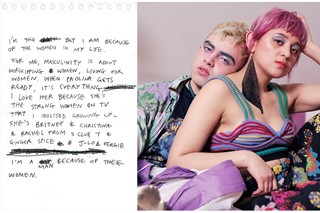 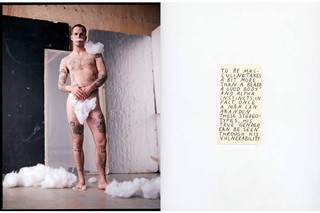 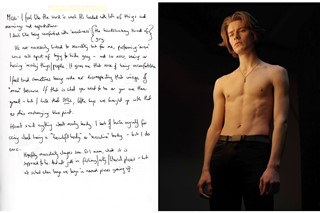 “I hate that still, little boys are brought up with that as this unchanging blue print.” Photographer Giovanni Corabi is discussing masculinity – defined as “the qualities traditionally associated with men” – but he’s hoping for a shift in attitudes. Reflected in his latest photo series, ironically titled Boys Don't Cry, Corabi uses his lens to focus on how men “express masculinity in their own way”. Fascinated by conceptions of “the ideal male body”, the London-based, Italian-born photographer became interested in how stereotypes around manhood shape the aspirations of boys and men everywhere – whether that is in terms of physical appearance, behaviour, or the need to keep feelings in check. “Growing up, all this pressure can be detrimental to emotional development and eventually do more harm than good,” Corabi explains. “I decided to fight the stereotype and to create a space for me and the subjects to open up and share our experiences.”

Referencing bell hooks’ The Will To Change as a “must-read” on the topic, Boys Don’t Cry is an attempt at getting men to talk about how they feel, casting off broken masculine ideals along the way. Shot in various locations – including the intimacy of the subjects’ homes or the manly setting of a boxing ring – Corabi’s photo-essay couples candid portraits of men with handwritten notes that reveal unusual moments of self-reflection. One comment reads; “To be masculine makes a bit more than a beard, a good body and alpha instincts. In fact, once a man can abandon these stereotypes, his true gender can be seen through his vulnerability.” All in all, Boys Don’t Cry is tinted with feminist ideas: the sense that there is not one single way to be a man, but multiple, and that men have much to gain from questioning and dismantling repressive gender stereotypes. The approaches men take to challenge learned-lessons are just as diverse as the cast itself. Some embrace traditionally feminine characteristics in order to break free, raising a middle finger to patriarchal norms. Other men find comfort in knowing that it is okay to show and practice vulnerability. Most importantly, the images are open to the viewers' interpretation and will, hopefully, leave you pondering: what makes a man, and what does the future of masculinity look like? As hooks’ title suggests, are men willing to change?

Eager to take conversations around gender beyond the progressive ‘cultural epicentre’ that is London, Corabi showcased Boys Don’t Cry in Milan last November at the Vogue Photo Festival. Below, we chat with the photographer about the struggles of teenagehood and why the discussion around masculinities needs to reach further.

Masculinity and gender are recurring subjects in the arts these days. Why did you want to create a project that explored these themes?

Giovanni Corabi: I think gender is a recurring subject here in London but there are still a lot of places that need to be exposed to this type of work. When I moved to London, I was exposed to this conversation and to a reality that was very different from what I was used to in Milan. People were very open and free over here – rebellion was just part of the everyday life. I love this atmosphere and approach. With Boys Don’t Cry, I didn’t want to use a language that would scare the average person away. I didn’t want to shock the audience but to draw them into thinking and feeling.

Boys Don’t Cry combines portraits of men with text that describes their experiences with masculinity. You also included some quotes from feminist scholar bell hooks about how conforming to typically masculine roles works at the expense of men’s emotional development. What readings or references have inspired your photography?

Giovanni Corabi: The Will To Change by bell hooks is a must-read for everyone. It was given to me while I was working on Boys Don’t Cry and I felt like everything I was trying to say was inside that book. She writes about her brother and the way he is confronted with patriarchal culture growing up, it feels like that kid is my own teenage brother or even my younger self.

On a similar note, I remember watching a documentary called The Mask You Live In by Jennifer Siebel Newsom that was spot on. It explored how men put on a defensive mask that is unemotional and tough, in order to better fit the gender norm.

How did you go about finding your subjects?

Giovanni Corabi: This projects took a little less than a year to make. I found people through work, at the gym, at uni, in my own family, or even on Instagram. I thought the project would work if I had a good variety of men, each of them expressing masculinity in their own way. I wanted to show that they are all valid and that it is all of them together that helps define what masculinity is. Seeing different men that talk about similar struggles can bring us closer and make us think. The subjects knew this was my angle and decided to open up and help me on this journey.

It seems to me that a big part of challenging masculinity is to embrace vulnerability. From admitting fear of failure to adopting feminine traits at the risk of being laughed at, your subjects opened up about how to navigate a 'man’s world'. How did you get men to share the difficulties they’ve experienced with gender norms?

Giovanni Corabi: I think emotions and feelings are neither masculine nor feminine. We, men and women, are a lot more similar than what we are taught to think. We are all vulnerable. It is part of being human. Like Johnny Blue Eyes says in his piece, we live in a world that separates us. We go from hyper-masculine to hyper-feminine. I wanted to shine a light on the fact that vulnerability or any type of emotion, is genderless.

One of the notes in the essay reads: “I hope masculinity changes soon … And not just in fashion/arty/liberated places but at school when boys are boys in named places growing up.” Do you see that happening everywhere?

Giovanni Corabi: Yes, that’s part of what Fraser wrote. I think he was referring to the fact that even though it is good that we are having a conversation in London, an open and creative environment, it is also important that it doesn’t stop here. The real goal is to have this conversation taken everywhere else too, perhaps in smaller, less liberal, realities than the one we live in. And I agree, it is important to reach a new audience and not just talk to each other. That’s something to consider while making a project like this, and one of the reasons I decided to have the exhibition in Milan.

Some men in your series talk about masculinity in relation to femininity and women. What role do you think men and boys have in promoting gender equality?

Giovanni Corabi: I think gender equality is freedom. We are starting to realise that we have many more things in common than not and the gender rules we have lived with for so long are starting to change and adapt to what reality is today.

Lastly, what do you think men have to gain from overthrowing masculine norms?

Giovanni Corabi: I am a pretty regular guy and yet growing up I felt like societal norms were very tight even for me. I think that is partly because when we are young we want to experiment and find out who we are but we are confronted with pretty rigid boundaries that are just meant to make us fit into society better, without causing any noise. Having a more open understanding of masculinity will allow future generations to feel free to express who they are without fear.