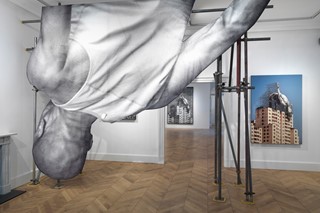 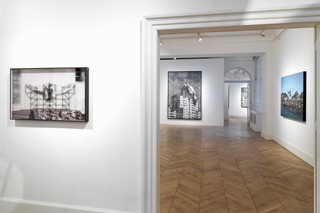 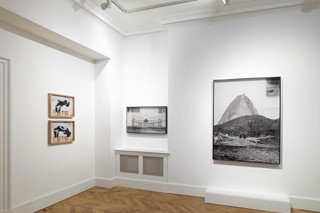 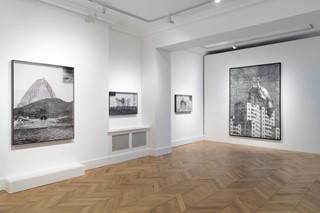 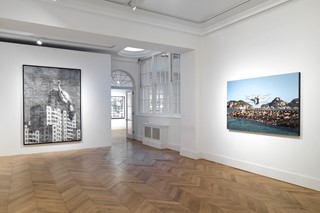 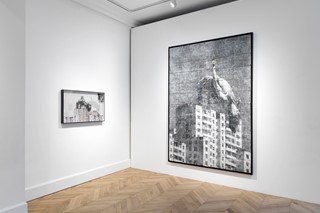 Acting as a resistor and connector comes easily for JR. As a street artist his large-scale installations and ethos have become emblematic of resistance, and his anonymity – he operates under a pseudonym and his work stands free from artistic marking or tag – means the viewer has to make connections between culture, history and the subject in focus. In response to this elusive approach, JR reminds me that this is his “first face-to-face interview in a really long time,” and that his self-confessed enigmatic approach is about much more than mere mystery: “I try to create a bridge between art and community, then I pull myself out of it all and let the people talk.”

I was speaking to French-born JR late last week during the opening of London’s latest art gallery, Lazinc on Sackville Street in Mayfair – founded by Steve Lazarides and Wissam Al Mana and the new incarnation of Lazarides. The two-tier space launched with GIANTS – Body of Work by JR, as well as a permanent display of artwork featuring Basquiat, Paul Fryer, and Warhol on a calming upper floor that includes lounges.

Alongside the exhibition, JR gives viewers access to his artistic process for the very first time, while premiering a new twenty-two-foot outdoor sculpture over the gallery. The curation inside features a combination of mixed media and preparatory sketches – all of which were made in anticipation of the GIANTS series, which saw JR erect towering installations of athletes across Rio de Janeiro to mark the 2016 Olympic Games.

Today, GIANTS – Body of Work celebrates an unparalleled level of precision that is essential when creating something truly – and literally – monumental. This underlying message can be felt in the subjects, who JR explains, “were all intentionally cast on the premise that they did not make the final team selections in Rio”. Once again, an acute reminder that GIANTS is a triumph of process over final product.

Below are some insights from JR that reveal his experimental techniques, and constant need for change.

“I try to create a bridge between art and community, then I pull myself out of it all and let the people talk” – JR

FROM PAPER PASTING TO INSTALLATION

“I just couldn’t find any more walls that were the right scale – that were big enough to do what I wanted with them, or any walls that would inspire me as much as they used to. So, I started playing with the city and with the buildings. The main difference between what I used to do and what I do now, is that I was adding to the buildings then, whereas now, through installation, I am going straight inside the architecture right the way to its core. My paper pasting projects like ‘Women are Heroes’ and ‘Face 2 Face’ focused on the face. I would do a close-up of the eyes and then the crop would be dictated by the shape of the building. Balance and form were key when I was paper pasting, and these things are still key now.”

ON MAKING GIANTS - BODY OF WORK

“This exhibition is a presentation of sketches that give insight into my creative process in relation to this type of installation – which is actually a new type of work for me. The space features a selection of pre-sketches. At the pre-sketch stage in the process, I have usually chosen the background and taken different shots of the athlete in various positions. Later in the process, the images will dictate how I build the scaffolding and that’s when construction starts. All the preparatory work and the fine detail shows the complexities involved here.

I have always loved this idea of movement, that’s why I have referenced ballet and worked on film, so collaborating with athletes for GIANTS felt natural. It was important for me to find a space that would show how the work was made, and Lazinc feels natural. Ten years ago I showed in London for the first time. I exhibited a video piece centred on the favelas in Rio de Janeiro (“Women are Heroes”) and now, I am here showing GIANTS – Body of Work. There is a consistency in space and location, and some big differences – now I am showing installations with preparatory notes taken from my studio.” 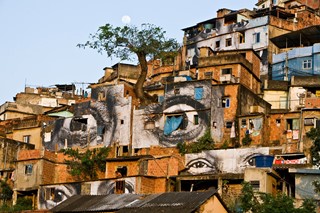 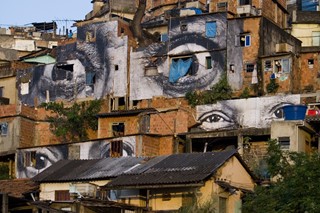 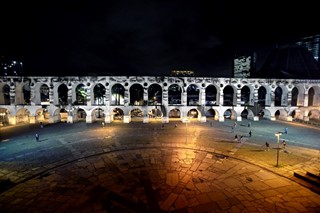 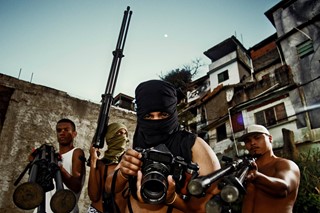 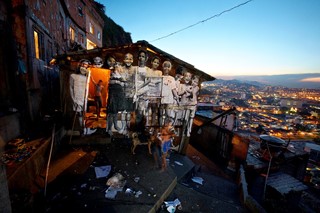 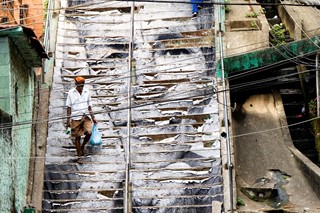 ON THE CITY AS A CANVAS

“It really started with the architecture, not the words or the plans, but the buildings in the city. For me, the city is a playground – completely, fully, in every sense. I don’t think people realise – or they do but they take for granted – the fact that the athletes in GIANTS – Body of Work are really diving into water, and really jumping into the air, and in doing that, the city becomes their toy. They didn’t just jump and I photographed an action, he jumped from that building and she swam in that water.

Precision has a really big part to play too. The photograph would dictate the shape and size of the scaffolding. If his hand was a little lower, then the scaffolding should be a little lower too. It was a dialogue between what’s right for the athlete and what is right for the building and then for the visuals. They all had to strike a balance, which was really hard. I also wanted to play on this idea that the athletes were ‘almost-Olympians’. They were really close to making the cut, but just missed out, and I wanted to champion them because through this piece they were ironically jumping higher than anyone at the Games.”

“The athletes were ‘almost-Olympians’. They were really close to making the cut, but just missed out, and I wanted to champion them because through this piece they were ironically jumping higher than anyone at the Games” – JR

HOW EXPERIMENTATION CAME OUT OF HAVING NO PLAN

“I like to do a series and then stop and never go back to it. Actually, the wooden pieces in this exhibition are part of a process I have been working on over the last few years, but I am now stopping this and these will be the last ones I create. The transfer of ink and wood is the exact opposite of paper pasting in the street. I paste in reverse. I paste the ink, then I peel the paper over hundreds of layers – that’s why you question whether the ink is coming through the wood or the paper. I like that you can see the imperfections of the brushstroke and all the wrinkles that makes the image appear at surface level. I will miss them! But I think as an artist you can easily fall into the habit of doing the same thing over again. I don’t want to do that. I like that as an artist you have this luxury to set your own codes, because there are no rules and you have so much freedom. The only constraint I am under is urgency, I have always worked in this way; with no plan and a restricted view of the future.”

WHY ARTISTISTIC ANONYMITY IS PARAMOUNT

“Because I want to create a bridge between art and people, I always do (anonymity) with all my projects. For ‘Women Are Heroes’, I actually signed the photographs with the name of the subject. I wanted to encourage the media to talk to the women, not to come to me, and to integrate with the communities to find out more about the art and therefore the people. There are interviews online, videos of the media interviewing these women who finally get to tell their story – this satisfies me much more. For me, art is about creating a bridge, one that connects with the community and when that is in place, I pull myself out of the picture completely.”