“I first came across Cookie in 1973, the night that John Waters’ Pink Flamingos opened in New York. It blew everybody’s mind – it was awful and funny, said everything that everyone was thinking but didn’t act on. It was rude, outrageous. I mean, I knew pretty weird people in New York, but none like these. I was fascinated by them.

I met Cookie properly in 1977, the year after she moved to New York. She lived a few blocks away from where I was living in the West Village, so I was at her place a lot, hanging out. It was a floor-through apartment on Bleecker Street, where she lived with Max, her son, and Sharon Niesp (rhythm-and-blues singer and Mueller’s then-partner). Cookie would take dance classes in the morning and dance in bars at night to make some cash – they weren’t really topless bars, she wore a little G-string and some pasties and said, ‘It’s great exercise.’ She had a very pronounced lisp when she spoke, but over the next few years, she conquered it.

Cookie affected a kind of bohemian floozy look. She had great style – very sexy. She had this monkey fur jacket that she wore for years, outrageous clothes. Always make-up. She put on make-up to go to bed. 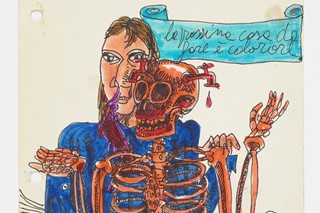 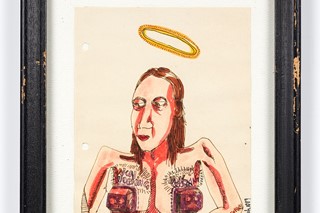 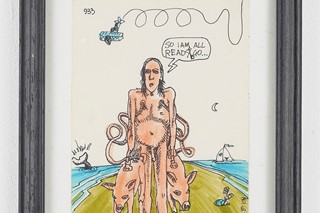 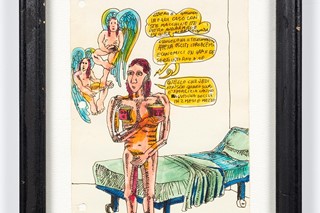 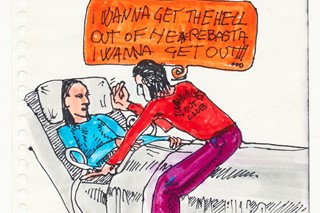 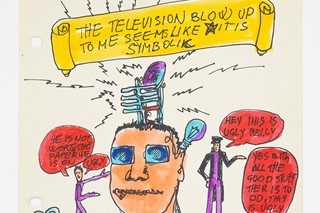 Her other cash sideline was selling drugs. That was part of the reason I was there. In the 70s, she got hold of something called MDA, which is like ecstasy. We called it the love drug because you had great affection for everyone around when you were on it. In the 80s, she had a cocaine connection, but it was all very small-time. Everyone in her life was an artist of some kind, or a writer or a filmmaker. We would go to her place, get high and hang out. She had this facility for organising people and creating a scene. ‘Scene’ is a little superficial for the friendships that formed and the energy that was sparking between everyone; we’d go out to the same places every night, hang out at the same restaurants, bars and clubs. Whatever anybody did, everybody else would show up for. New York then was so electrified, it really changed the culture of the country at that time.

“Cookie would take dance classes in the morning and dance in bars at night to make some cash – they weren’t really topless bars, she wore a little G-string and some pasties and said, ‘It’s great exercise.’” – Linda Yablonksy

Cookie was always writing. I remember early in our friendship when she told me about her life and that she’d written a novel aged 11. She showed it to me; I don’t know what happened to it. She wrote for the East Village Eye – ‘Ask Dr Mueller’, an advice column (although she wrote all the questions and answers!) – and later wrote a column in the original Details called ‘Out and About’. She wrote them in the mornings or late at night after coming in from openings, dinners, drinks, clubs. And she was writing short stories that were later collected in a book, Walking Through Clear Water in a Pool Painted Black. Everything in that book is true – everything. She’d had a hard life and struggled to make ends meet, but she never lost her dedication to her work, no matter what was going on with her son, finances or drugs. She used her life as material to write wonderful stories. I read them now and think, ‘She really had something great.’

In the summer of 1983, Cookie somehow put together the cash to rent a place for the summer with Max and Sharon in Positano, Italy. I remember her when she came back. She said she’d met this guy (Vittorio Scarpati). She was talking about how intrigued she was and how she couldn’t stop thinking about him. Meanwhile, she was still living with Sharon. But she was falling in love with Vittorio. Sharon knew it – and of course they knew when they met.

The following summer, Cookie rented the maid’s or the gardener’s quarters of an estate in Positano once owned by the Italian filmmaker Vittorio De Sica. She invited me – I went, ostensibly to get off of drugs, because at this point we were all junkies. So Max was there, Cookie and Vittorio, Rene Ricard, Patrick Fox and Pat Place, who I was travelling with. I loved it there. And I began to see very quickly what she saw in Vittorio. He wasn’t this macho guy, he was more like a poet, but he was really a political cartoonist. He also made jewellery. He made me a pin that I wore for many years, I never took it off.

“[Cookie had] a hard life and struggled to make ends meet, but she never lost her dedication to her work, no matter what was going on with her son, finances or drugs. She used her life as material to write wonderful stories. I read them now and think, ‘She really had something great.’” – Linda Yablonksy

Vittorio had luxurious, long, curly black hair and this classic Neapolitan profile. Big, sad eyes, very thin – he was a junkie, registered as a legal addict. Once a week we’d go to this hospital in Naples where he would pick up his morphine, and go out in some nasty, fascinating neighbourhoods in the city and buy heroin. Vittorio got us on the Italian methadone program, too. So, there went my plan to get off drugs.

Pat and I left for a few weeks to travel around Italy, and when I got back, Cookie told me they had decided to get married. With the bureaucratic red tape, it took some time. It was maybe a year before Vittorio arrived in New York. They got married on the roof of the East Village building where John Heys lived, and there was a party that night in the loft of the artist Joseph Kosuth. I had finally managed to get off drugs. I was nervous about going to this party, because I was less than two weeks clean, after huge trauma in my life. But I couldn’t not go to my best friend’s wedding! (laughs) It was my first sober experience in 25 years. Even though I wasn’t quite in my right mind yet, I remember the feeling of being present and alert and how much I liked that feeling – and how unfamiliar it was to me. Cookie was just happy to finally be marrying this guy that she deeply loved, who became a father to Max willingly. For a lot of men, that’s problematic. Max accepted it. They were a family. Sharon moved out, got her own place – obviously. (laughs) That was 1986.

I can’t remember when she told me she had Aids, or that he did, but it must have been ’87 or ’88. At that point, Aids had changed everything in New York, starting around ’85 – although it appeared much earlier. We knew so little about it. There was a lot of superstition and paranoia about how you got it and how you could transmit it. Doctors didn’t want to treat people because they thought they would get it. Hospitals wouldn’t accept people. If a woman came in, she was assumed to be a prostitute or a junkie, and they would just leave Cookie sitting there and say nasty things: ‘You asked for it.’ All we knew was that, every day, somebody else we knew was dead. If you got HIV, it was a death sentence.

“If a woman came in, she was assumed to be a prostitute or a junkie, and they would just leave Cookie sitting there and say nasty things: ‘You asked for it.’”– Linda Yablonsky

Instead, Cookie and Vittorio went to a hospital where they were treated with dignity. First Vittorio, then she needed to be hospitalised too. Eventually – and hospitals don’t generally do this – they gave them a room together. There is a famous picture of Vittorio that Philip-Lorca diCorcia took of him in the hospital. It had been his birthday, and we’d had a big party there.

There must have been 50 people in this room. There were balloons. We had drinks. It was wonderful. I mean, we knew they were dying – we didn’t care what rules were broken. Then Cookie got out and went home, but Vittorio stayed. That was when I started seeing the drawings he was making (which would later become the book Putti’s Pudding, with text by Mueller). It was all about his experience of Aids. Because he had pneumocystis pneumonia, his heart and lungs appear in a lot of these drawings, with daggers and tubes. You also see pigs: the Scarpatis had a farm outside Sorrento, so I’m sure that represents the family business. You see the whole experience – it’s both horrifying and poignant. He was a very poignant individual and a wonderful cartoonist. He left an essential record of this moment in the Aids crisis, one that documented it in a way that nobody else did – with a bleak sense of humour, just trying to handle what was happening to him and leave something behind of some value. I don’t know where it came from, but he always had some kind of melancholy about him.

“[Vittorio] left an essential record of this moment in the Aids crisis, one that documented it in a way that nobody else did – with a bleak sense of humour, just trying to handle what was happening to him and leave something behind of some value” – Linda Yablonsky

Vittorio died in September of ’89. Cookie carried on for a few more weeks, but she spoke with great difficulty. She died one month after Vittorio. When she died, no one was in the room. I had gone home to take a shower, Max was in the bathroom, other people were in this waiting room. I since learned that this often happens. People don’t let go until nobody’s there.

One of the last things Cookie said to me was, ‘My only regret is that I didn’t finish my novel.’ I don’t know how far she got with it. She knew then that I wanted to write a book that would have something to do with our friends’ collective adventures in the drug culture of the 80s. She looked at me – I put this in my book because it was so stark – and said, ‘Write your book, just write it.’ And I did.

It’s ironic and telling that Cookie died on the day the Berlin wall came down. Germany was liberated, just like this free spirit. I’m not a magical thinker, but I can’t help but think it’s all connected.” – Linda Yablonsky

Linda Yablonsky is an art critic and author of The Story of Junk: A Novel. She is currently working on a book about Jeff Koons.