As he releases two new volumes of work, we meet the man who turned celebrity photography into an art form 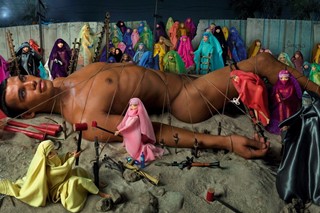 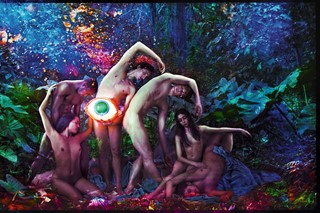 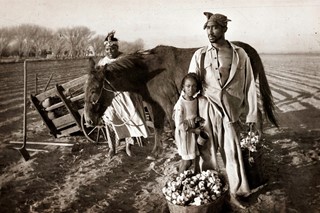 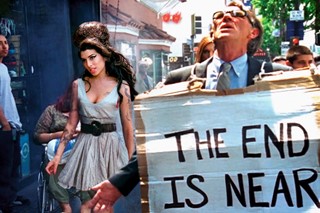 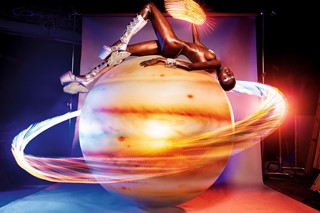 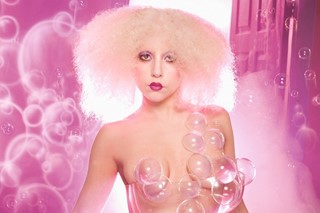 It’s hard to imagine what celebrity photography might look like were it not for David LaChapelle. Across three decades, the American photographer’s high-octane, surreal images of everyone from Pamela Anderson to Hillary Clinton redefined the magazine portrait. Now he has published the final two of a five-volume anthology of books that span his career. Published by Taschen, Lost and Found (Part I) and Good News (Part II) offer the photographer’s two sides: the celebrity and fashion work that defined him, yes, but also the fine art that is perhaps closest to the 54-year-old’s heart.

LaChapelle came of age in 1980s New York, working at Andy Warhol’s Interview Magazine and embedding himself in the downtown scene. Soon he was shooting the zeitgeist’s stars for glossy magazines, in images that nailed the pop cultural obsession permeating the 1990s. Tupac in a cotton field, Britney Spears dying in a bathtub, Amanda Lepore as Warhol’s Marilyn: for LaChapelle’s art, nothing was too risqué or subversive. Today we’re immune to attention-grabbing celeb imagery but 20 years ago the landscape was different. Shock value went a long way. But at the height of his powers, shooting magazine covers and videos for pop stars, he decided to pack it in in 2006 and move to Hawaii to get some space. “I was at the top of the world, as far as a career goes in photography,” he explains. “And I thought: let younger people who are passionate about celebrity and fashion do those things. I still love glamour and beauty and popular culture, but I think that there has to be a balance.”

“If you made work that pleased everyone, then I don't know what that would be. Vanilla ice cream?” - David LaChapelle

Today LaChapelle works mostly in fine art, using commercial work as a way to fund his long-term artistic goals, which often involve reclaiming the nude form from the grasp of sexualised commodification, or attempting to create a vision of the world where good can win over evil. You’ll find these in Good News (Part II), where he explores the world in all its possibilities. While much of his celebrity work has been, in his words, a mirror to society, Good News (Part II) is “less of a mirror, more of a prism,” as he asserts. “Refracting light into a rainbow of potential.” But the transition to fine art wasn’t easy. Dogged by criticisms that the work was gimmicky or sleazy, it took time to break into art-world galleries. Not that it bothered him. “Nobody enjoys getting ripped apart, but I’ve had a thick skin,” he says. “If you made work that pleased everyone, then I don’t know what that would be. Vanilla ice cream?”

Now living between Hawaii and Los Angeles, LaChapelle spends much of his energy working on Paradise, an ongoing series that riffs on biblical imagery and the idea of utopia on earth. But with the publication of these two final books, he’s taking a moment to reflect on a career that has encompassed celebrity, controversy, and criticism. We met him in London to look back.

“Well, I’d stopped working with celebrities. I really didn’t want to see another pop star again and my friend Sharon Gault, the makeup artist, was talking about this girl, and she came to Hawaii before she’d blown up. She was playing the piano and writing this song, she was so talented. It was this beautiful ballad that she was making up, on this old rundown piano we had, out of tune because of the salt in the air, the humidity. But she still played the hell out of it. Her voice was really great. She was a real musician. So she asked me to do the cover of Rolling Stone and I thought, ‘You know, doing celebrity once in a while when it’s someone that’s interesting to me, or when it’s interesting to the world…’ You know. And that’s how that came about.”

“I still have my office and my apartment there (but) I don’t recognise it at all. Although all my dreams are usually back there. My dreams, in tenement apartments. It was a really magical time and I knew it – I’m not looking back through the lens of nostalgia. I knew at the time how amazing it was. Pre-Aids, it was really like an artistic utopia. The dancing... It was such a brilliant scene. And the fabulous creation going on. Whether it was Jeff Buckley playing at Sin-é, or going to openings with Jean-Michel Basquiat and smoking joints with him, hanging out with Keith Haring at his fabulous openings, or just seeing these people at clubs all the time. Working for Andy Warhol at Interview, I really was in that mix.

It was a very small scene and nobody cared. Now, everyone is so obsessed with the divisions of (sighs) race and gender identity and gender politics and all this crazy stuff. We didn’t give a shit about that stuff. We were just like, if you dress cool, if you were cool, if you created art – we didn’t care who your family was. Nobody talked about money, or any of this bullshit. You could be trans, you could be gay, you could be white, Black, Puerto Rican. You could be whoever you were, as long as you brought something to the party that was interesting, you were cool. If anyone was to say something off-colour, they wouldn’t even be there! You know what I mean? Nobody saw colour – I don’t think real artists see class and race and sexual orientation. I don’t think real artists ever have. If you look through history, 1920s Paris or the Harlem Renaissance. You saw a mix of people in these salons and they didn’t care. Just, were you interesting, or were you not? End of story. And that’s how you were accepted or not accepted.”

IS ART TODAY IN DANGER OF BECOMING SANITISED?

“Not mine! I know what my motivations are. I know what my intentions are. And they’re pure. I never did it for money, I never did it for fame. Never did it to shock people. I’m trying to bring good news and light, and inspiration. I’m trying to touch people. I’ve been really blessed that I can work as an artist and do the pictures I want. Whether they sell or not doesn’t matter – it doesn’t depend on the art world either, because I can do commercial work for a couple of days and can write myself a cheque. It’s funding my own artwork, writing my own grants. And (so) it doesn’t matter if people don’t buy figurative work, or the photography and the nudes aren’t selling because people are interested in abstract expressionism. So I’m freer than any other artist because I’m writing my own grants… I am my own benefactor. I have collectors and people who don’t care about such things anyway. People who have found me. Because I’m definitely off somewhere else!

Even when I worked in fashion. (Look at) Isabella (Blow), too. In hindsight, everyone’s like, “Isabella was this fashion insider.” (But) they were making fun of her and being mean to her… It’s the same with Andy Warhol. People were so horrible to him when he was alive. The art critics weren’t buying anything and people were so dismissive and it wasn’t until he died that they (said), “Oh, he was a genius.” And the same with Izzy. So I see how fickle the world is. It doesn’t matter to me what people say about the pictures, and the great thing is I can keep taking the pictures. I keep funding myself, as I always did, since I was a kid. Broke in the East Village. Or I came here in London in 1984, working so I could fund myself. I had incredible freedom and I feel very blessed to have. What the world does or says doesn’t really affect what I do.”

LISTEN TO YOUR INNER VOICE

“These young kids (I meet) now grew up with my first book, LaChapelle Land and they’re like, collectors and art directors who were young kids (for whom) I was their first art book, their first photobook. I hear this over and over again, I’m meeting these mature adults… I feel like Ansel Adams! (Laughs)

For the new generation of photographers, my only advice is to follow your intuition. It’s a whole new world now because I don’t do social media; Instagram and all that stuff. They’re all on that, that’s how they share their work. They don’t know how to make prints. I spent 12 years in the darkroom… Printing is very important to my craft, so they’re coming from a different place, with the whole Instagram thing. So I can’t give practical advice on that because I don’t know anything about it.

I could never have planned where I wound up or what happened, but all the decisions I made that were really important in my life I made in solitude and nature, no devices on or with me, or friends around me. A lot of my friends were dying of Aids in the 1980s (and) I had a lot of questions about what was going on. I had to think what to do next, what path to take. Decisions about when I left photography. The answers are inside of us, but we’re so distracted and so busy with all this stuff that we’re not gonna hear our intuition – that inner voice that can guide us.”