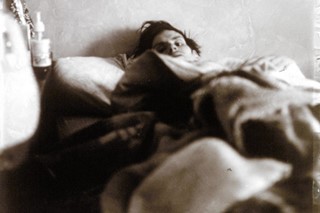 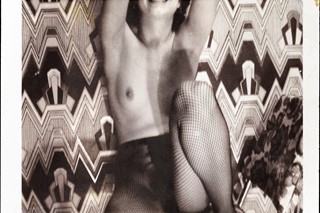 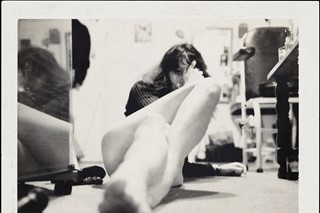 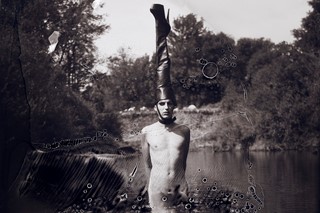 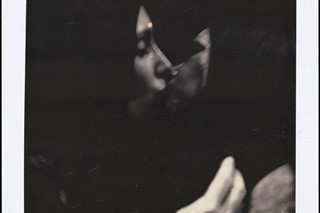 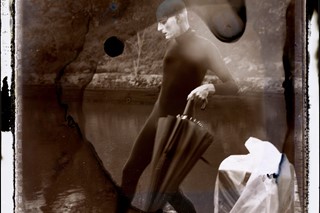 In the late 1970s, Gail Thacker studied painting at Boston School of the Museum of Fine Arts, alongside Mark Morrisroe, and Pat Hearn – while George Condo, Jack Pierson, and Tabboo! were also on the scene at nearby schools. The golden haze of the hippie movement had faded away and in its place punk became the call of the day. The DIY ethos enabled artists to create life and work on their own terms, forgoing the established trends in search of freedom and truth.

After graduating in 1981, Thacker headed south, living in the suburbs so that she could easily commute into New York. Though the art world was experiencing a vital renaissance as the downtown scene brought fresh life to the art world, the dark specter of Aids devastated a new generation of youth coming of age.

Morrisroe’s illness became a turning point in her life. When he became gravely ill, he gave Thacker a box with hundreds of sheets of Polaroid 665 film and asked her to use it. She incorporated the Polaroids into her practice, using them as a means to record the world in which she lived – but her photograph was not meant to merely document the world as it was. It became a means to reveal the alchemical properties of life itself.

Through the great fortune of a mistake, Thacker discovered that the negatives could be manipulated through the unintended but inevitable experience of decay. She adapted her process to explore the balance between creation (life) and destruction (death) in art, transforming her work into a metaphor for existence itself: the risk and reward cycle of possibility – loss or win.

Using herself and friends as subjects, Thacker has created works that evoke the unconventional spirit of Old New York – where life itself could become a work of art. Each work Thacker creates is a singular moment that embodies the ephemeral and the eternal in equal part. The photograph, as object, is as fragile and resilient as life itself: marked, torn, taped, collaged, and altered by the passage of time.

Thacker’s work has been gathered for Between the Sun & the Moon, opening today at Daniel Cooney Fine Art, New York, and running through December 22. A book of the same name will be published by QCC Art Gallery Press. Thacker speaks with us about how to navigate the porous boundaries between life and art.

“We were just kids, being creative” – Gail Thacker

“The Boston School of the Museum of Fine Arts was a really small school, maybe 200 students. I immediately made friends with Mark Morrisroe, who would be my friend until the day he died. I think of us as risk takers. We were just coming out of free love and the hippies – and we were at a point where we were against that. We just wanted to ruffle feathers. We wanted to make people upset. We were good at that.

There was a scene going on with more accomplished artists but we did it ourselves from the ground up. Steve Stain had a warehouse so we’d go over there. George Condo used to perform. Mission of Burma was over there. We were just kids, being creative.”

FIND YOUR PLACE IN THE WORLD

“When Mark and I came to New York to go to Nan Goldin’s opening we were like, ‘Wow! Look at the people here. They’re like us!’ There was no one like that in Boston – just us. We were like, “This is where you come to be an artist.” We all wanted to move to New York.

We all had our punk names. Mark was Mark Dirt in Boston. But when he came to New York he was like, ‘I am Mark Morrisroe now. I am a professional artist.’ And I was like, ‘Okay, whatever…’

I lived in the suburbs and I moved into the city in for good in the 90s. Mark never moved to New York. He lived in Jersey City. Even back then, the city was expensive to us. $300 a month! That was a lot. (Laughs).”

“I work from the ground and I follow the light. I believe that there is something alive in everything. The Polaroids are living things. They decay, they change, and the people in it are holding onto life and celebrating it. They’re trying to make their mark.

It’s also about painting and the marriage of the two things: the way the Polaroid reacts to the passing of time and what is happening to the lives of the people I love – people dressed to perform or backstage, my lovers or my friend on his deathbed. It’s the stuff going on in my life.

I think of the risk taking that was going on in my personal life was very reflective in what happened to the Polaroid. It could totally disappear and be nothing but you take your faith in life and chance and beautiful things happen. Sometimes I lost an image.

I think of something very raw, very old, like primitive art. Like that language that we’ve always known, that we always speak. There’s no symbolism in the work. I’m not doing a series. Everything is from a different direction, whatever that moment is. That’s how I live my life.”

“Life is for living. You breathe life in and art out. You experience as much as you can experience without fear. It took me into a lot of areas I wouldn’t have gone if I were not an artist – trying to find that place that where our real feelings are.

The living of life is also the art. It’s not living the life of the an artist; it’s living life as you want to, without conditions and no backup plan. My father said something really good to me. He said, ‘Gail, the minute you have a backup plan you failed.’ He was right.”

BE OPEN TO RECEIVING

“When Mark was dying and he gave me this gigantic box of Polaroid, there must have been 30 boxes and all I had to do was experiment with it.

It was so unconscious, so unintentional, that it all just flowed together. My friend Rafael Sánchez and I were with Mark during his death period. It was the middle of the Aids crisis and it became a safe zone for the two of us. I describe my photos as play. It was like, ‘You bring your toys and I’ll bring mine and we’ll fool around and just play.’

We would start off with one idea and go in a completely different direction. Each one of the people I photograph participate in the creativity of the photograph. It’s not just me, it’s them too because the photographs wouldn’t exist if it weren’t for their energy and creativity. Then the Polaroid process comes and transforms it.

I made an accident of leaving my negatives too long and it expressed death to me, and loss and risk. Then when I printed them, they were beautiful. It was intense. Mark knew he was dying and he was giving his medium to me. It was the saddest thing in the world.”

EMBRACE THE CYCLE OF LIFE AND DEATH

“I took Mark’s portrait on his deathbed. I had just taken a portrait of him holding flowers because I was trying to show the beauty that was still there. It was a really scary period. Everybody was dying and it was beautiful men, mostly. My gay male friends were dying and people were scared to touch them. Nobody understood how you got Aids yet. It’s hard to talk about.

I don’t understand it myself. I always say it was a philosophical lifeboat, doing those Polaroids in the 90s. It’s almost like we’re the generation that people want to push aside because it’s not pretty. We tried to make something pretty out of it.

All of the images are really dark, both physically and psychologically and I wanted to find a way to lighten them up and bring the joy of now into the conversation and so I am painting into my old images for that very reason, to bring out some joy and color – because I’m still alive. I didn’t think I’d be the one still alive. A lot of people died. They’re all gone.”

EMBODY EVERY FACET OF YOURSELF

“I didn’t take nude portraits because they were nude portraits. I wasn’t thinking politically about how the men were always clothed and the women were always naked because they were objects. My mind doesn’t think like that at all. I have been taking off my clothes since I was in art school for a video, and then everybody else started taking off their clothes. It came to me because I’m always walking around naked in my dreams for some reason (Laughs).

I think nudes are so natural. They’ve been in art for so long. But (a nude female self portrait) can’t help but be political. I think it is the age of the female. It’s our voice right now.”

ANCHOR YOURSELF IN THE COMMUNITY

“(As the Artistic Director of the Gene Frankel Theater) I’m over here on Bond Street. I’m that crazy lady that runs that old theater and never has any money – and everyone around me is really rich. The building is all artists. Mapplethorpe used to be on the fifth floor.

I’m going along with Jane Friedman’s philosophy: it’s love. If you love the artists, the creativity continues. I’m older now so I’m trying to help other artists by giving them energy, a place to go, and to talk. They used to have the bars in the old days. You can come over here and find me, and we can sit around and shoot the shit.

New York is my muse. I love it. I love the architecture. The people are amazing. There is creativity happening always. I learn from it. When people ask me, ‘Where’s the art world?’ I’m like, ‘It’s right here.’ I know a lot of artists and they’re all here. We’re making art, conversing, and living life. It’s not gone, it’s just not as easy to find anymore.

You have to be 24/7 to be an artist in New York City. As soon as I leave the house, I’m on my tippy toes. To me, it’s all about community and people that are supportive of your work. I’m lucky to have a theater. It just landed in my lap. But the money is hard. Being connected to the ground leaves the magic open to enter. You just have to be open.”