Tips from the master of message on using language as a tool for change, collaboration and loving art endlessly 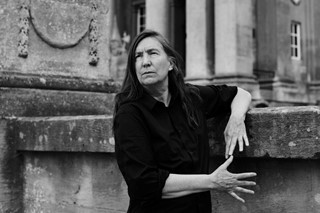 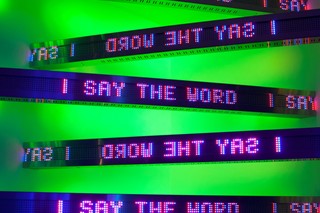 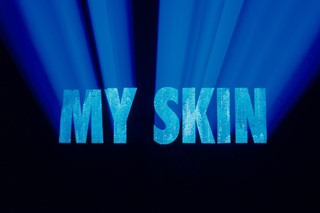 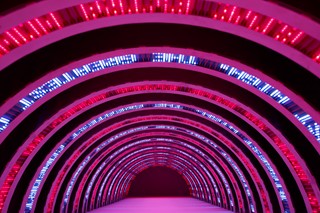 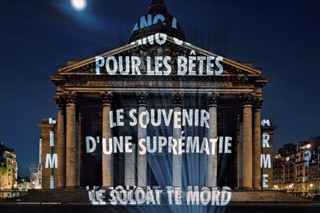 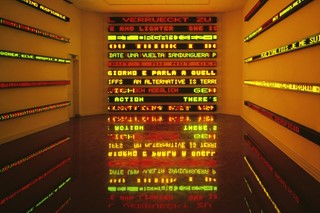 If there’s one person who can get the message across, it’s Jenny Holzer. She’s been painting the city with words since the mid 70s when she slapped her first series of Truisms (1977-79) as anonymous broadsheets onto buildings, walls and fences across New York. ”Symbols are more important than things themselves...There’s a fine line between information and propaganda...Your actions are pointless if no one notices them”, reads a sample of one liners from her ‘79 Truisms.

For more than 40 years, Holzer has innovated methods of message delivery, going from a strong presence as a street artist in New York to progressing with technology in turning her words into LED light projections in nearly every major city. Her most recent show Softer is live now at England’s Blenheim Palace and it's a fusion of Holzer’s mastery. Her newest light projection illuminates the Blenheim Palace exterior and wraps viewers in poetry on war, violence and politics.

From the master of literary value in shock and surprise, and one of the most immersive public artists of our time, here’s a guide on how to get the message across.

“I went to language because I tried to be a painter and was awful, so I thought ok I will write. Language lets one communicate and that can be useful. It doesn't always work, but it’s a start. It's a traditional vehicle, I find it useful and sometimes evocative, especially when I use text by other people. I like offering a huge amount of content for people's enjoyment, fear, passing.”

“Language enables you to be explicit, and that's useful at times. I wouldnt always want to depend on language though, because I personally like to have the sort of content that comes from glowing amber light. I like language to be presented in a variety of medium so you can have the experience of tracing letters cut in stone with your hands, or seeing text in benches full of water from the rain. I like wrapping people and myself in light. It maybe comes from street artist days when I had the luxury and benefit of New York city as the blank canvas. So I feel exceptionally fortunate when I have just the right surroundings.”

USE THE SPACE AROUND YOU

”I like to have the leg up from what’s around me. So, for my most recent exhibition Softer at Blenheim Palace, the palace was a war prize so I was able to collect and concentrate from its history. In addition to thinking about war, we thought of softer things such as a blanket on Churchill’s birth bed, white light that keeps the geese awake, a hand embroiled military surplus sleeping bag, the rather robotic and threatening electronics in the great hall and human shoulder blades.”

“I stopped writing, which was a relief. I stopped using my own text other than for the occasional vintage t-shirt because I couldn't write as well or as comprehensively as I would've liked. I am much better off using text by many wonderful poets, or digging out formerly secret documents. My favourite poets are Anna Świrszczyńska and Szymborska – I must really like polish poets. And my friend the American poet Henri Cole. My introduction to poetry is Cole’s fault so I must give a nod to him. I like to roam in poetry. I am drawn to these poets because they are smart, eloquent, unashamed, cutting as needed. Szymborska and Swir were both beautifully clear-eyed and their work visual. And they are both concise, which made them especially attractive to me.”

”Love art dearly, I mean it. Don't do it if you aren't absolutely possessed by it. No one needs trifling stuff or half hearted things” – Jenny Holzer

“Attend to what’s happening and be alive to that. And then think of what doesn't just ameliorate the worst, but consistently makes things better. Its necessary now. Not to go off on a tirade, but this global warming thing is not a small matter, having millions of people displaced is not inconsequential and is tremendously cruel, having wars in more places than typical is frightening, having Trump as president is unspeakable. Read the paper. Be alive to what is around you. Make sure it resonates within. And don't rely solely on the art – make sure you try every which way as a citizen and a donor and a worker – that’s the way to go.”

TAKE IT PUBLIC, BUT KNOW YOUR LIMITS

“I already spend way too much time talking to myself so it’s a luxury, a privilege, a necessity to talk to others. I want to imagine, although I'm not always convinced, the subjects I tend to focus on could be of use to people so at least while I am entertaining that desire, it makes sense to put these ideas in front of as many people as possible. And it’s nice to put them outside of the art world, don't you think? Sometimes. Themes of violence are off limits in the public space. I am not interested in making things any worse that are adequately taken care of. Boredom, ugly sex and violence are off limits.”

FIND VALUE IN SHOCK AND SURPRISE

“Life is routinely shocking. If I am reflecting life then some art will be shocking. Who wants to go through life sleep-walking? It’s dangerous out there, we should all look around, no? Subtlety and surprise goes back to my street artist practice of putting things where people don't expect to find anything at all, irrelative to meaning or content. That’s an opportunity for an artist to give something to the public. The public needs to decide and has every right to decide whether to pick it up or not.”

“How did I become the first woman to represent America at the Venice Biennale? Barely, I think is the answer. I had a baby at the time. She and I are still friends, so that’s an achievement. I was of course enormously flattered and even more so frightened, because who wants to be the first woman who makes a mess of it. To break boundaries, work hard, be generous, don't be a creep.”

MAKE ART FOR THE LOVE OF IT

“Love art dearly, I mean it. Don't do it if you aren't absolutely possessed by it. No one needs trifling stuff or half hearted things.”

SOFTER: Jenny Holzer at Blenheim Palace is on until December 31. You can find out more about the show here