“The Skin Two club was a revelation. No one was allowed in unless they were in rubber, leather, uniform or drag – no street clothes at all. It was another world. There was bondage going in in corners, submissives kneeling at their dominants’ feet. We had no idea at the time, but fetish people were everywhere. This was the birth of the modern fetish scene that’s now spread worldwide.” When publisher Tim Woodward and photographer Grace Lau first attended London’s notorious Skin Two fetish club in 1983, they were astounded by its freedom. Embedded in a rather dull wider fetish scene of early 80s London, one including “just a few older folks in rubber raincoats meeting in cocktail bars or the Mackintosh Society”, Skin Two was a groundbreaking, colourful, fun, not at all sexist, society that combined pop stars with housewives and models, people of every walk of life and ages.

Skin Two’s premiere issue was a small 16-page black and white zine that eventually evolved into a glossy magazine over the preceding 66 editions. Inside the 80s aestheticised Skin Two archives, readers enter a world where women of all genders are in control of their sexualities and the gaze which perceives them; queer experiences are in constant celebration and everyone is a master of their own autonomy. More than that, we can explore the fetishist roots of Jean Paul Gaultier, gawk at the work of the world’s best fetish photographers, and explore how sex really is at the core of humanity via topics like fetish and religion, fetish and gender, fetish and queerness.

Publisher Tim Woodward and assistant editor Michelle Olley take us back through some of Skin Two’s most iconic milestones and the history of London’s fetish scene.

“We were always 20 years ahead of the times” – Tim Woodward

Michelle Olley: I'm pretty sure this was the only interview Jean Paul Gaultier did in 1991. The thing about 'fetish' is it's pretty subjective and means different things to different people – you could argue it's about objects that contain some sort of charge – in religion that is likely to be the 'spirit' or essence of the deity; in fashion, it's most likely to be some item of clothing or silhouette that is sexually charged. Gaultier has worked extensively with the notion of female strength and clothing that works to empower by exaggeration of the female form, so the obvious tropes there are the corsetry (which he is on record as saying comes from his admiration of his grandmother and her style), high heels, pointed bras, strong tailoring, leather and rubber, uniforms etc. Exaggeration is a fetish in and of itself, to an extent, in his work. There's also a playfulness in some of his works that appeal to the dress-up side of fetish fashion – sailors being one of the most iconic examples... JPG doesn't half love a sailor!

Tim Woodward: We made a big effort right from the start to profile liberal ideas around feminism and female sexuality. Skin Two was founded by myself and Grace Lau, who is very much a feminist, and our whole idea from the start was to not make another sleazy men’s magazine. What made Skin Two different was our experience at the Skin Two club that then informed the magazine. When I went to the Skin Two club, the inclusivity struck me. I was completely struck by how many women were there. It was a time when loads and loads of women were thinking ‘we want some of this’ – it’s fine if men like women in high heels – there’s nothing wrong with that – but basically women were always kind of serving that. And Skin Two completely challenges that and it’s why people like Michelle Olley and Julia Collings and all of these other really interesting women got involved. So we started mixing in dykes, gay men and all that, and it was very much not about pretty young women looking gorgeous. This reflected our community – very inclusive. We were always 20 years ahead of the times.

I remember what really gratified me was when I was approached by a masc leather dyke in a club with her girlfriend on a leash, and she asked me in a rough voice, ‘are you the guy that’s doing that Skin Two magazine’, and I was like, ‘um, yes’, and she put her hand out and said, ‘well, thank you’.

Tim Woodward. Our biggest market was America. I remember Doris Kloster, lovely woman – she had a lovely flat in Manhattan, partied with Bill Clinton, very well to do. I used to hang around the Meatpacking district in New York myself. It was great fun, terribly sleazy, there were two clubs; Hellfire and, well, I don’t remember the other, but they were not exclusively fetish, they were all sorts of rude things. It was much more hardcore. We decided to profile the district’s macho drag scene because it was sexy. And transvestism and bisexuality had been in a bit of a corner at that time. Transvestites were middle-aged guys who secretly dressed in suspenders when their wives were out kind-of-thing. But these guys were totally different from that. And bisexuality until then was regarded as weird and never spoken about. So these guys were a complete opposite to this – they were gay or bisexual, really strong. And that was quite revolutionary, really. It challenged stereotypes surrounding masculinity and drag. It completely challenged the middle-aged bloke – these men are handsome fit, with heels and make-up on.

Tim Woodward: We started the annual Rubber Ball in 1992. These are the fashion pictures from the Rubber Ball profiling the work of particular fetish designers worn on the night: Craig Morrison, House of Harlot, Murray and Verne. We were the people who made fetish glamorous. Before Skin Two you could dress in a rubber catsuit by all means and you would look like an old diver. And there are a few older people who still do dress in rubber like a diver, but what we do is so different. In Michelle’s words, the Skin Two Rubber Ball was a public celebration of fetish glamour. And it was important to us that it was public and that it was fetish, but also glamorous, to show that fetish could be stylish.

Michelle Olley: Fetish fashion wears its heart on its shiny sleeve, I think. All designers play with symbology and semiotics, without wanting to go full-on John Berger/Roland Barthes here. Fetish fashion states more clearly what fashion/couture may feel for commercial reasons it can only allude to. Fetish fashion is overtly and unapologetically sexual. Even when the cut is being coy, the fabric is pulling no punches. It's also more egalitarian (up to a point – fetish fashion, if it's up to snuff, isn't cheap). With designers needing to think beyond not only model sizes and ages, but gender too, and there has always been a ton of gender-fluidity in fetish fashion. It’s important in the same way as utility wear or evening wear is important. It's got a job to do, and, in this case, to put you in a particular head-space that, for most people, has nothing to do with dressing for society/status.

Tim Woodward: It’s broadly true that before Skin Two came along, fetish photography was blokes taking pictures of sexy women: a lovely woman in some sexy pose for guys to masturbate to. This is really boring. And this photography was made for men. So with photographers of Skin Two’s calibre, you get completely away from this old gaze. If you look at Gerard Musy’s work, for example, it's as far away from porn as you can get. Their photography is non-exploitative, non-sexualised. We had heaps of female readers, and having Michelle on board, she’s a huge feminist, and she would never come on board to something that is sexist. And Julia Collings – same thing. That’s what the photography is doing here, it is to appeal to all sexes and sexualities, and it is stylish. For example, look at Jeanette Jones’s work. I like her – she’s really into pictures of hot gay men, as a lot of women are, funnily enough. I learned that through Skin Two, and it informed a lot of the things we published – flipping the gaze so women had hot men to look at too, which contributed to yet another strand of what we were doing: hot men for straight women.

CLOSER TO GOD: FETISH AND RELIGION

Tim Woodward: Julia Collings wrote this piece. She was bought up a Catholic and she’s really into that kind of stuff, especially drawing links between Catholicism and fetish. Religion is fetishism in a different suit of clothes, for example, Collings’ article reads, “the masochist’s endorphin rush is the same as the Matyr’s ecstatic final reunion with God. It exists above and beyond the vanilla world of orgasm.” If you are going to kneel down with a long robe and pray, it’s not much different from my parties. There’s a guy that comes to my parties in a complete latex priests outfit and you can confess your sins and be spanked if you like. 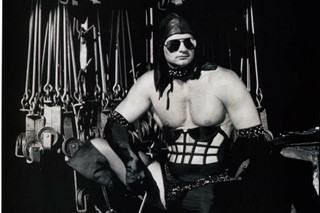 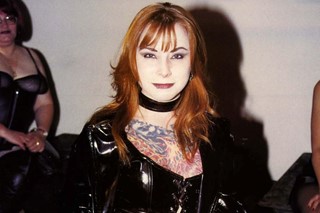 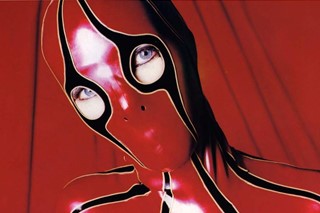 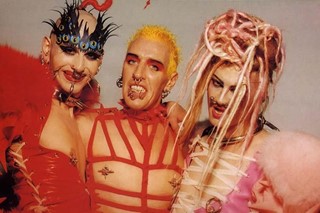 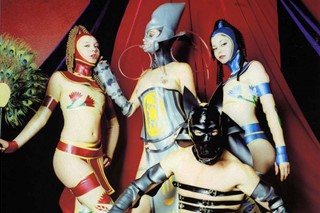 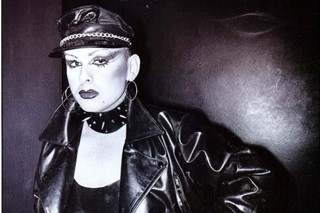