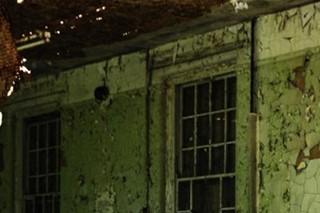 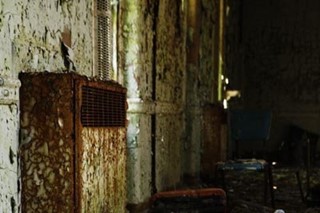 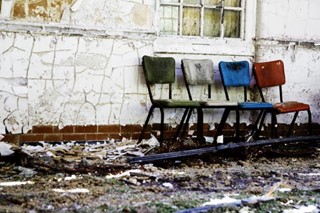 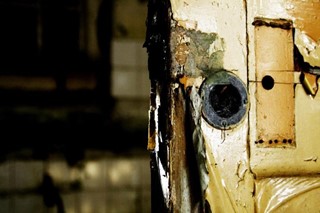 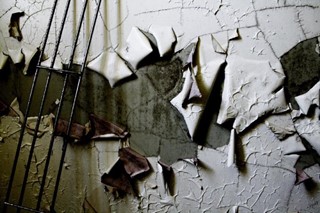 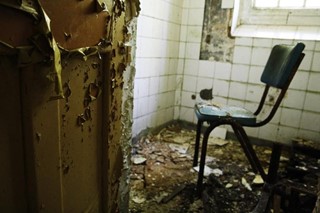 Jenny Hardcore is a photographer whose professional name provides a good indication of the kind of subject matter she is drawn to shoot (we doubt it will come as much of a shock when we tell you that pastoral landscape photography is just not really her thing). Hardcore is already a pretty well-established figure on the underground rock'n'roll scene for her work with musicians, and for numerous projects in which she shoots herself, friends and family in graphic horror-like scenes of self-mutilation. However, her latest series of works – a quietly haunting exploration of an abandoned asylum situated just outside of London – is perhaps her most challenging undertaking to date. We managed to grab some time with her in between the fast click of her shutter to talk about the spectre of history, myth-making and walking thourgh life with a spotlight trained upon the darkest corners of the world.

Dazed Digital: What inspired you to visit this abandoned asylum?
Jenny Hardcore: I have always held a visual fascination with places that unsettle the viewer. I used to spend a lot of time watching horror movies and this visit was very much like walking into a set for me, but a set with very a real history and tangible humanity. Anywhere that has been lived in and abandoned inevitably holds stories of the past. Our eye naturally scans for these stories and looks for traces of activity, which turns the context from a straightforward documentation into something approaching myth. It crossed my mind a few times to move an item for better composition but somehow it felt sacrilegious to do that.

Dazed Digital: As a photographer/artist are you fascinated by decay?
Jenny Hardcore: In a word, yes. However, my fascination is far from exclusive to decay. I am into the construction of images that cause the viewer to pause and think about what it is they are seeing. The abundance of decay in these buildings is a very overt invitation to consider their history – the colours or patterns glimpsed on pieces of wallpaper, the scraps of toilet roll left on a holder, the light switch still positioned on… all of these facts invite us to consider more than just what we can see now but what the people who lived and worked there saw on a daily basis.

Dazed Digital: What do you think of the way in which society deals with mental illness?
Jenny Hardcore: I have a very ambiguous view on contemporary treatment of that which we define as mental illness. I read an article in the New Scientist not long ago regarding the effects of American drug companies exporting globally. The most worrying example told of the Japanese understanding of depression, which up until recently was 'utsubyo' which related to a prolonged period of deep sadness, at the time considered to be a personal hardship that builds character. In order to make the drug a success in Japan the company producing it came up with a new term: 'kokoro no kaze' meaning 'a cold of the soul'. In the first year of it being on the market Japan bought $100 million. In 2005, they were approaching $350 million and rising.

Dazed Digital: Do you think photography can capture an objective truth, or is every image a construction?
Jenny Hardcore: Personally, I see a lot of my work as cinematic or fairytale-like. I think this is primarily my own aesthetic preference, but there is a huge benefit to a minor suspension of belief. It invites the viewer to question what they are seeing. It is not my intention to scare of horrify but simply to leave certain meaning open to interpretation. I suppose have always been most fascinated by the fact that of all the thousands of images I have taken it is the fractions of seconds I have not seen (thanks to shutters) that are captured! I consider the addiction to photography to be like walking through life with an enormous spotlight and being able to draw people's attention to certain things. Someone once said to me 'there is no such thing as reality other than that which you, perceive to be real': I think truth is in the eye of the beholder. Relating back to mental illness: one man sees an arrangement of food in the shape of a face and another simply sees a mildly symmetrical pattern on a pizza, each is entitled to his own perception of truth and reality.

Dazed Digital: There is something strangely personal about these images...
Jenny Hardcore: During the post-production process, I received some very sad news that a good friend of mine known as the MRS had died. He was a talented artist and poet. I am usually very minimal with colour and saturation but reconsidering his work at that time had a big impact on me both personally and creatively, and it became important to me that these images of life passed should be filled with bright and vibrant tones. The project became far more personal and something like my own personal tribute to what I knew of him. His inspiration in this project as an artist in his own right was very important, and I am glad to have considered these images from a different perspective both in terms of meaning and aesthetic.
Read More

The most mind-blowing photo stories of the month
PhotographyIncoming