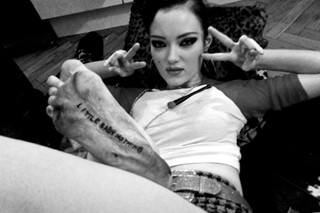 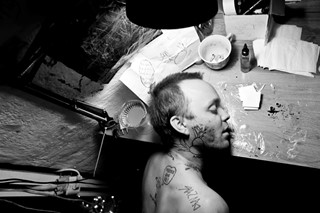 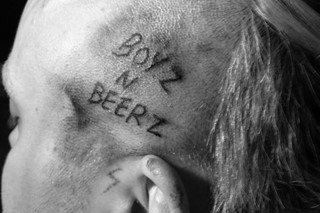 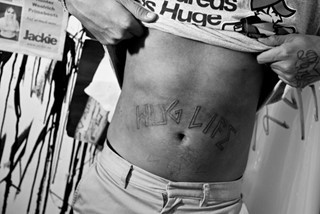 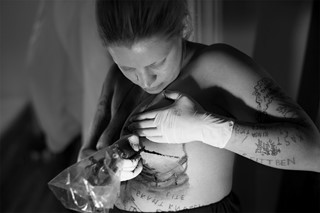 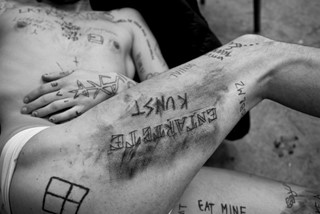 There is always fear and doubt at the tattoo parlour, even if just for a brief moment. And there is always an irresistible aura of fun and destruction in homemade tattoos on someone’s arms: it suggests nights fuelled by alcohol and loud music at someone’s house, with mates and a tattoo machine. Swedish artist Linnéa Sjöberg uses both: the lifestyle and the energy of decision with life-long consequences. For over a year she has been travelling around Sweden and Europe with her tattoo machine as Salong Flyttkartong – an art project merging tattoos, performance art and social experiment. The key idea is ‘Act Before Thinking’: deny the reason, be irrational, be completely free in what you do with yourself. Her project inevitably became the gravitation point for all like minded lovers of chaos, creating a rather curious creative community.

Linnéa doesn’t really consider herself a part of Stockholm art scene and is used to follow her own instincts. “It's a small scene in a small city up North”, she says. “For me it's pretty dead. I'm not so much in contact with other artists, I'm doing my thing”. Her own thing requires a lot of determination: her key medium is long-term performance projects where she completely transforms her identity, lifestyle and everyday life – sometimes to become a groomed business woman, sometimes an anarchic tattooer.

As a book published by Nilleditions, Salong Flyttkartong is a fascinating 346 page documentations of dozens tattoo sessions, hundreds of handmade tattoos, drinks, mess and disorder – an impressive artist's statement. We speak to Linnéa about the energy of destruction, her ‘boob job tattoo’ performance and the most frequent ink requests she gets on her Salong Flyttkartong tour.

Could you tell a little bit about the concept behind Salong Flyttkartong?

Linnéa Sjöberg: Salong Flyttkartong translated from Swedish means ‘Studio Moving Box’, and it emerged from a way of living. In my artistic practice I often change my identity for a long period of time, up to two years. I usually don’t have a clear concept from the beginning, it develops on its own. I bought a tattoo machine to have a hobby and to be able to do it myself. But then I understood that I could use the machine to build a social platform for certain behavior, for my idea of ‘Act Before Thinking’. This social platform also helped gathering graffiti guys and artists with whom we shared the same energy of destruction.

Act before thinking is particularly interesting for something like tattoos which stays with you for life. Was it the idea: act first think second, the consequences don't matter?

Linnéa Sjöberg: Yes, completely, that's the energy in the project, kind of counter-productive. It’s two opposites: act before thinking but it's going to stay with you for the rest of your life. People need to take a stand point: some people are like, “Yeah, go ahead,” and some back off and don’t want to hear about it, they are so frightened of this idea. In my art practice it is a challenge when I start to behave and produce thoughts that I can’t understand and grasp at the moment.

So the studio is just you or is it a collaborative project?

Linnéa Sjöberg: Just me and the machine, actually. The name shows that it was mobile and temporary. But I want to confuse the viewer to think that there was a group. I took away my name, and in the end, people thought there were other guys. I wanted to hide myself behind the project, as in my art practice I raise questions around my authorship and identity.

Where did you travel with your project, mainly around Sweden?

Linnéa Sjöberg: Mainly around Sweden but also in Europe. I called it Salong Flyttkartong tour. Sometimes I was invited, sometimes I just bought the machine with me while travelling.

Do you have a favourite location from this project?

Linnéa Sjöberg: My favourite locations were always the ones where it was not planned. Someone's living room or a basement or just in the fucking street. Because that was the energy of Salong Flyttkartong. When I started to get invited to more proper locations I often failed to show up. I got to fucked up the night before, was too drunk or I overslept. My character of Salong Flyttkartong was a very annoying person in the end…

So who had to come up with the ideas for tattoos: you or the people?

Linnéa Sjöberg: Often people asked me to come up with something but I always said; “No, I’m here for you, I come with a service, so tell me what do you want.” I wanted to move away from myself as an artist. With closer friends, of course, we could sit and talk and come up with funny text, as I'm mostly text based. But I was never the one to make the decision.

Were there any recurring requests?

Linnéa Sjöberg: Yeah! My logo, GTD 4s810 (Getting Things Done for Satan) or my regular name.

Have you had any training as a tattoo artist?

Linnéa Sjöberg: I trained on my partner in crime, Christopher Insulander, and on myself. It wasn’t proper training. I’m a home tattooer, you start on yourself and your best friends.

“I booked a time at a plastic surgery clinic in Manhattan and asked the doctor to draw the lines that he would follow during a breast enlargement. With those lines I went home and tattooed them in front of the mirror, by myself” –Linnéa Sjöberg

Do you have a lot of tattoos which you inked yourself?

Linnéa Sjöberg: Yes, around 40 per cent of the tattoos I have on my body I have done myself.

Could you tell a bit about ‘the boob job tattoo’ performance which certainly involved some of this?

Linnéa Sjöberg: I lived in NY for a short time a little bit over two years ago and this was an idea which emerged in my earlier project The Business Woman. I booked a time at a plastic surgery clinic in Manhattan and asked the doctor to draw the lines that he would follow during a breast enlargement. With those lines I went home and tattooed them in front of the mirror, by myself. Then I printed a photo of the tattoo on t-shirts – a tits-t-shirt. So if people wanted to see the tattoo of my breasts they could buy the t-shirts and wear it themselves. That was one of my first more ‘conceptual’ tattoos. At that moment I understood that I'd probably use the tattoo machine in my art practice.

Lastly, you do a lot of long-term performance works, is it your favourite medium?

Linnéa Sjöberg: I always need to follow the material I have. At the moment I'm weaving rugs on the loom, it’s my main practice for the last six months. I’m recycling all the clothes from the Business Woman project I did before. For one and a half years, I transformed into my idea of a businesswoman as a 24/7 performance. I have all these fancy clothes left, Prada, Alaia – I’m cutting them into pieces to make rag rugs. And I'm taking care of plants, abandoned IKEA plants, that I steal plants from banks and boring offices, and take care of them.