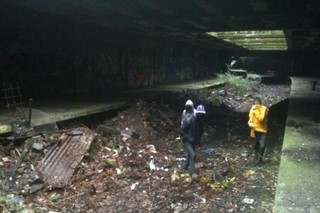 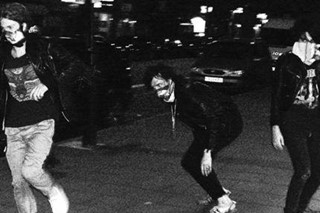 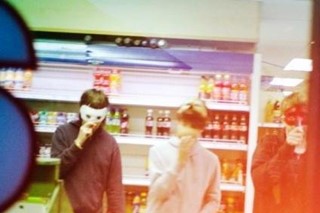 They are filthy, they are pretty and they match – and the same can be said about their music. Say hello to Is Tropical: the trio and its rocky-electro ADD sounds, performed with veiled faces and psychadelic projections got French indie insane at Paris’ Kitsuné night last week. Dubbed the ‘Messiah of the event’ by the local music press, the boys are about to give the world a taste of tropical malady. Dazed bombard singing Gary, drummer Dom and Simon and his electrical piano with serious and useless questions...
Who are you?
Is Tropical, a miscreantic genre-beheading band from London.

How would you summarise your music?
Bass heavy, Beat driven, Pop-influenced lo-fi dance music. There's a whole set of new labels and genres springing up on the internet but so far we've managed to elude most of them. We've been termed 'Electro-Rock', 'Art-Pop', and 'Doss-Wave'; all of which are completely meaningless. Maybe we should coin our own.. Heat-Wave? Tidal-Wave? Dunno.

WHAT's... ...the story behind the name?
Our old friend Scouse Chris used to say 'Is' in front of every word. It sounds definitive, and if you're from Liverpool you'll know it works in any situation. Tropical is just a nice word, and quite abstract, but magically this idiosyncratic turn of phrase stands up to the pressure. If Chris was stealing a bite of your kebab, 'Is Tasty'; if he was comforting someone, 'Is Right....' etc.
... are your main influences (musical and non musical)?
What we like and what we're excited about changes now on an almost real-time basis. Our generation is the first one to really be completely technological, and as a result of that each of us has had a myriad of influences, in all media, and from an early age. In a typical day just listening to music or watching clips on the internet you can go from D.A.F to Cheryl Cole's new song; that's a pretty big leap. At the moment we're big fans of Age of Consent, Yeasayer, T3ETH, Caribou, Schwefelgelb, Silver Columns. Non musical influences that have to be mentioned are the documentaries of Adam Curtis, the series 'Lovejoy', the films of Jim Jarmusch, the artwork of Miltos Manetas and others. Friends like James Balmforth, Matthew Stone, Dom Jones that all push things forward in londons art and fashion ect.

... do you have for breakfast?
Dom: Smoking and 'Magic Carpet Ride' by Steppenwolf, and then half an hour nap.
Simon: I once got made scrambled eggs, salmon and lemon on crumpets with horseraddish - blew my mind
Gary: Eggs, loads of them

... the meaning of life?
Dom: Peace and LOLs
Simon: Hopefuly not to be continuously skint
Gary: Make it as easy as possible, I think

... is your worst fashion mistake?
Dom: Drumming in Ugg Boots. Unforgivable.
Simon: Too many to count, I've burnt a few photos.
Gary: Matrix, head to toe

If you were a vegetable, which one would you be? How about an animal?
Dom: Broccoli Rappa
Simon: I would like to be a carrot because they're good when raw and a greyhound because I like the way they stroll.
Gary: Fox because they eat children and probaby a human vegetable .
What’s your favourite Beyoncé song?
Dom: Cheryl Cole - 'Parachutes' beats any Beyonce song ever
Simon: 'Single Ladies' - because of the crazy loop in the back that if you listen to too much pisses you off
Gary: 'Sweet Dreams' - it's got quite a Daft Punk riff

If you weren’t musicians, what would you be?
Dom: Heavily Medicated
Simon: Wannaby artist
Gary: Artist/Drug dealer
Read More