In one scene in Tinashe’s self-made video for “Boss” (from her debut mixtape, In Case We Die), LA’s most out-there young R&B star puts a blood-coloured rose in her mouth and bites down fiercely. The cost of the roses was the video’s entire budget: $12. “Boss” – memorably remixed by underground producer superstar Ryan Hemsworth – has since clocked over 1.2 million views and appeared on national TV.

“That video was literally Tinashe, me and her dad!” laughs the 21-year-old’s manager, Mike Nazzaro, in a kitchen in Echo Park. “I was holding the camera and she’d be there telling me what angles to shoot. Then she took all the film and edited it herself.” 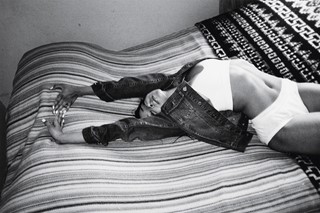 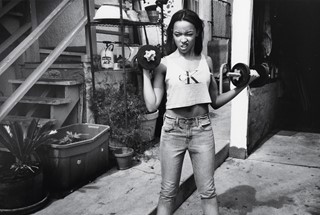 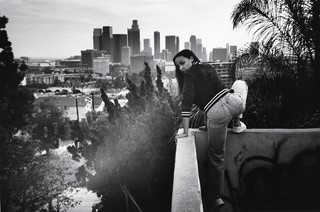 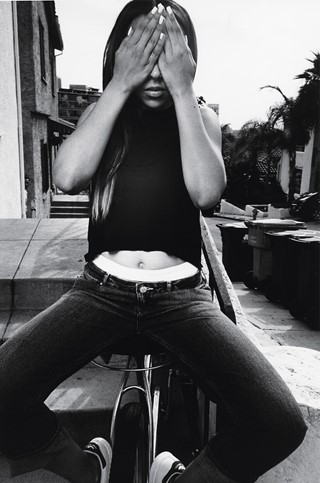 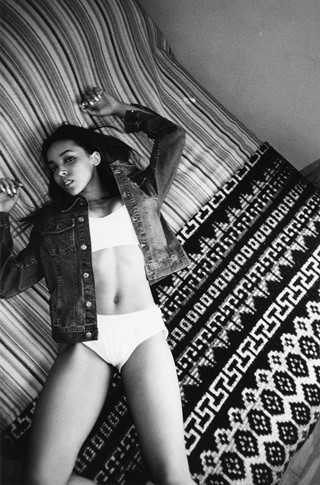 The popping video for “2 On” (featuring Schoolboy Q), the trap-tinged first single from her long-awaited debut album, couldn’t be more different. She dips, twists and grinds to DJ Mustard’s stadium-sized beat with the poised yet aggressive sexuality of a young Ciara or Janet Jackson. The glossy clip could well be her star-making moment, but she’s not taking it for granted. Tinashe’s almond eyes widen in disbelief as she tells us that over 1,000 dancers auditioned for just seven spots in the video in front of “Single Ladies” choreographer JaQuel Knight.

“It’s been such a huge step from A to B,” she says. “That’s also why the album has taken so long, because there are all these other voices now. When you’re used to making all of the decisions yourself, sometimes it’s hard to listen to somebody else. Buuut,” she emphasises, pointing her manicured index finger, “the good thing is, because I was so hands-on in the process from the beginning, I’m lucky that RCA really, really respect my opinions as an artist. They don’t try to hold me to any particular direction because I’ve already established exactly who I am.”

It’s very different to how it was when Tinashe began her musical career back in 2007, with pre-packaged girl pop group The Stunners. During their four-year existence they signed to two major labels, opened for Justin Bieber during his 2010 My World tour and performed on NBC’s The Today Show. But, Tinashe says: “We didn’t get much control over what we were presenting. I was writing music for the group but from the perspective of five different people, from culturally different backgrounds and ages.”

Looking back, her grown-up intensity was evident in The Stunners’ bubblegum (literally: their hit was called “Bubblegum”) videos, in which she looks somewhat out of place. Nazzaro was running the Top 40 department of Universal Records when they signed to that label in 2010. He hopped on the 20 dates they did for the Bieber tour. “You see the group element when you’re on the road, and you can pick out who’s really running it,” Nazzaro says. “Tinashe was easy to identify. She was only 16 or 17, but she had ‘it’ – she was a star. She was super professional, and already had such a heavy background in entertainment.” Before the music took over, she was a teen actress, appearing in small roles in several films and scoring a recurring role in Two and a Half Men.

Tinashe was born to a Zimbabwean father and an Irish/Norwegian/Danish mother, both university professors, and credits them as a key influence. “I’ve been trained in this business since I was three,” she says. “In a way, that’s a blessing for me, because I know that I’m not in it for the wrong reasons. This industry’s so full of distractions, whether it be partying, drinking, sex, money. You get into the industry and all of a sudden those things are more important than the bigger picture. And they create such obstacles. I think I’ve had enough time to really get a grasp on it all. The priority for me is just to make music that people can connect with. I want to make something fresh that people may not understand.” Her face lights up. “But I hope they will!”

Tinashe is the ideal pop package: wit, guts, an exotic look and an hourglass figure Barbie couldn’t hate on. Post-Stunners, she could’ve easily taken the route to formulaic chart-topping success. But she opted instead to go independent, creating dark and unsettling music with raw, unpredictable lyrics and eerie melodies. Her music is as disorienting as the visuals in her videos, a fascinating jumble of contrasts in which nothing is what it seems. “Who Am I Working For?” from her mixtape Reverie, for instance, is sung in an airy, sexy falsetto over a down-and-dirty beat, yet the lyrics go somewhere else altogether (including the line “no one’s more enslaved now than the ones who falsely feel they are free”, a quote from Goethe).

“It’s usually one or the other,” she says. “You have to pick, ‘Am I going to listen to something that’s very melodic and easygoing, or do I want to listen to something really weird?’ I like to find that happy medium.” She’s also found a middle ground for her sound, though “happy” isn’t quite the word: it sits in a haunting purgatory between abstract R&B, dark pop and murky electronica. “It’s been important for me to be able to experiment and not get stuck in a box. I don’t ever want to be genre-specific, because music these days really isn’t, for the most part. Think about Lorde. Is it pop? Indie? What is indie these days?”

“This industry’s so full of distractions: partying, drinking, sex, money. The priority for me is just to make music that people can connect with. I want to make something fresh that people may not understand”

Despite now being signed to RCA, Tinashe is a poster child for all things indie. The LA-raised maverick recorded and executive produced two independent mixtapes – In Case We Die and Reverie – from her bedroom in 2012, and followed them in November with a third, the 11-track Black Water, which features “Vulnerable”, her track with rap god Travi$ Scott, which Katy B mashed with Beyoncé’s “Drunk In Love” recently in a live session for Rinse FM to devastating effect. Tinashe shot the mixtape’s vibrant cover herself, in her kitchen.

“Last October I realised we weren’t going to hit our album release date, which had been slated for 2013, so I decided to make Black Water for my fans,” she says. “I locked myself away in my room for a good month, writing and recording all day and night. I’m the type of person that doesn’t like to wait for people to do things for me, and I never want to feel stuck. Why sit around and be like, ‘I wish my label would book me some studio time,’ if I can just buy my own studio equipment and figure out how to run Pro Tools and record it myself?” She shrugs. “I don’t think I’ve mastered the production side of it yet, but I’ve definitely mastered vocal production. I have it down to a science!”

“She’s super, super focused,” Nazzaro says. “Beyond.” He left Universal around the same time Tinashe left The Stunners around the same time in 2011, and they’ve been working together ever since. “She has a focus that most people don’t have. It’s an intensity, a whatever-it-takes mentality.I’ve worked with enough pop stars, and the ones that sell millions of albums and sell out huge venues all have that same eye of the tiger. It’s tunnel vision. She’s been like that the whole way.”

Tinashe’s retreat into her self-built bedroom studio for Black Water followed a spell of recording in top-notch studios around LA, NYC and London, with the likes of Stevie Nicks or Elton John working just down the hallway.She even recorded in Westlake in West Hollywood, the studio  where Michael Jackson recorded Thriller and Bad. (Incidentally, she claims that the studio had a special room built for Bubbles, Jackson’s pet chimp). She’s been focusing solidly on her album for the last two years, grabbing studio time with what she calls “the crème de la crème of producers,” including Jacques Greene, Dev Hynes, Mike WiLL Made It, Boi-1da, T Minus, Clams Casino and Sade’s Stuart Matthewman. When Dazed spoke to Tinashe last August, she had 60 songs recorded. She’s now faced with well over 100 to choose from.

“It’s interesting because the album goes into a lot of quirky places; you feel like you’re traveling,” she says. “But when you work with a ton of different people, it’s really easy for it to sound like just a bunch of tracks together. I want it to feel like an album. So I’m glad I’ve had the extra time – it’s been fun for me to fill in the gaps and find the missing pieces and make it sound more cohesive.”

Tinashe casually finishes the last tortilla chip in a family-size bag. She’s wearing a sporty tomboy-ish ensemble, with a woolly beanie covering her strawberry-blond locks. As she cracks geeky jokes with her crew and speaks passionately about politics, it’s strange to think about the forceful vixen of videos like “Vulnerable”, and the racy way she yearns and taunts in her songs.

“As a person,” she says, “I have a lot of different sides to me, and I genuinely just embrace them. I don’t think, ‘Oh, I gotta put on my cool face now!’” She laughs. “I can make dark music or sexy music, and I’ll come do a goofy interview. For most artists, you take what you have and who you are, and then you expand on it to make it more entertaining. Everyone knows actors aren’t the same people that they play in movies, but people somehow expect musicians to be a certain way all the time!”

Tinashe should know – as a musician, dancer, model and actress, she’s been performing creatively since she was a baby, even modelling in a nappy ad. She’s part of a new generation of no-limits Renaissance kids. “We are one of the first generations that’s been fully immersed in a technologically connected society,” she says. “There’s a big group of kids in my generation that are very apathetic and just wait for things to be handed to them. But there’s also a big group of my generation who have realised that we do have a platform that we haven’t had before, and they’re activists, in a way. I really believe that our generation could embrace new ideas that the world has been hesitant to grasp, only because people are so afraid of change in general. We’re already trying new ways of looking at relationships, new ways of looking at society, new ways of looking at race and sexual orientation. And that all comes into play with just being connected.”

Tinashe is ready to push the way we view society, at the risk of alienating some fans along the way. “Don’t stop looking at me,” she moans repeatedly on the hook of “Vulnerable”, challenging the audience to take her on her own terms and forcing viewers into an uncomfortable – indeed, vulnerable – space. As the lyrics to “Stunt” (from Black Water) go: “Just when they think they know me, I switch up.”

Poised on the cusp of her breakthrough album, teetering on the edge of transitioning from blogosphere queen to the mainstream’s next-big-thing, Tinashe feels too hype about it all. Or “2 On”, even. “I think at the end of the day, success and confidence go hand in hand. I feel like that’s truly the only way you can realise your full potential: you have to be unshakeably confident in yourself.” She looks dead on. “If you can’t convince yourself, then who will believe you?”