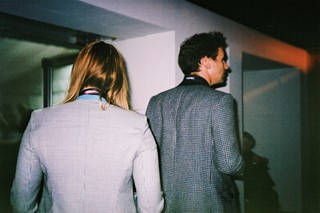 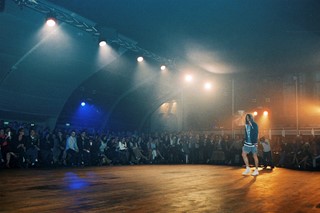 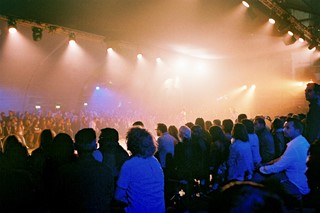 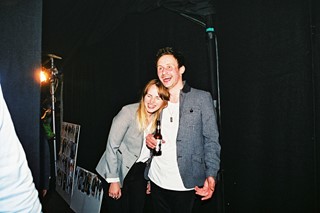 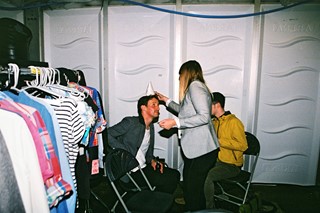 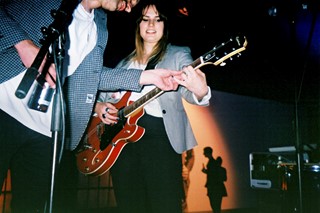 Battersea’s iconic power station is going through a bit of an identity crisis. Once a coal-powered station sitting comfortably on the south bank of the River Thames, later this year it’s going to be turned into a luxury hotel.

Until then, the huge, four-chimneyed building - pock-marked with shattered window panes, the inside raw and exposed – houses a sleek, shiny glass structure, where tonight Superdry are celebrating their 10th anniversary. Contrast doesn’t even come close.

That contrast resonates with Coves, who perform their dreamy, shoe-gazey indie in lieu of a DJ tonight, as toned catwalk models sweep across the stage. “If I had to describe the night I suppose I’d say… well, Super is a bit obvious,” says singer Beck Wood. “Energetic is good. There’s a lot of energy tonight. We’ve been here for a few hours and I haven’t got bored once. There’s loads going on. “It’s like organized chaos,” says instrumentalist John Ridgard thoughtfully.

Fashion and music aren’t total strangers, nor are Coves to the idea of fashion and style; Beck studied fashion at university, even having her work featured at London Graduate Fashion Week – but grew tired of the industry and dropped out to pursue music photography instead.

“Then me and John were out drinking and we decided to be in a band,” she says. “It was one of the best decisions we made.”

“It’s a continuing theme; we haven’t recorded any of the songs on the album without at least a bottle of wine. We’ve kept the drunk theme going,” John says proudly.

Coves’ signature sound – a kind of lethargic-chic that turns savage and sweet in tight turns – should feel out of place in the glassy castle within Battersea’s ruins, but taking to the stage in the brand's latest premium collaboration with contemporary British tailor, Timothy Everest's moddish, tailored jackets and brogue-boots gives the band a kind of sophistication that takes them beyond their two years together.

In much the same vein music and fashion sit comfy, so does music to Battersea; the station has been featured (and popularized) by The Beatles, Pink Floyd and, er, Take That, who rowed past it in their video for The Flood.

Superdry founder James Holder calls the band ‘raw and exciting’ earlier in the evening. “They’re a rare talent, they’re doing a great job representing British music at the moment and we’re thrilled to have them with us tonight.”

And for Coves, the venue has stood out as one of the most iconic venues they’ve taken their music. But where will they go from here.

“Maybe the top of the shard,” Becky says wistfully.

“Or failing that, we could play some tunes on the District Line,” John says, before the band button up their blazers and take to the stage.