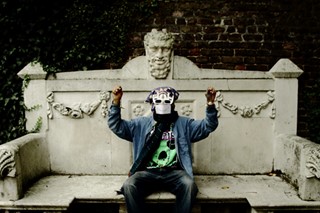 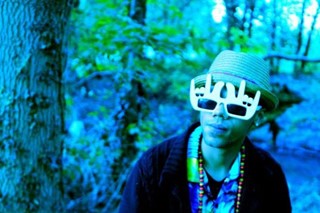 Onoe Caponoe's music is definitively experimental, intergalactic, and funk-driven, which makes sense with song titles like "Funkadelic Planet" and "Milkyway 1311." Given the praise for his first album Central Control on Audio Doughnuts, it's no surprise that his second album Willows Midnight Gallery is causing such a huge buzz. Despite making music with a wide range of influences, Onoe's strength lies in making a cohesive, psychedelic mixture of it all. Dazed caught up with Onoe Caponoe to talk about other dimensional vibes and the trillness of Emma Watson...

WHAT'S...
..your secret talent?
I'm the secret king of spooning.

...the story behind your name?
It was a name I used to write all over the place when I was about 13/14 in my graffiti days… I changed it a few times but all the names were as stupid as each other. I'm also known to some as Onoe Catporno. Then there's another side to myself, Jim Willow the Wizard which is some whole other shit.

...your worst vice?
The finer things in life.

..your worst fashion secret?
If you don't have money for a iron, put a rolling pin in the microwave or oven cousin!

How would you describe your work?
Well the stuff that's out now is the funkadelic introduction wave, so it's some smooth tripped out, deep, other dimensional vibes along with some digital acid crazy shit. I have a second LP coming out on Audio Doughnuts and that's the second wave of work. You can listen to and it'll take you somewhere else... it's a bit of a cosmic journey. More of a darker and psychedelic voyage than the first LP though, real magical, interesting and obtuse.

What's next?
Keep sending smoke signals, spreading the bad word and to trying to get back to the mothership. Painting girls gold, and assorted scallywag behaviour with the  Funk Mafi & West Coast Triple playas!

muteunmute
max volume
Update Required To play the media you will need to either update your browser to a recent version or update your Flash plugin.
MusicIncomingrap