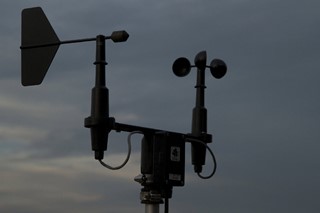 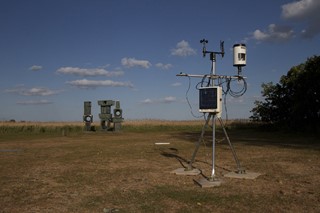 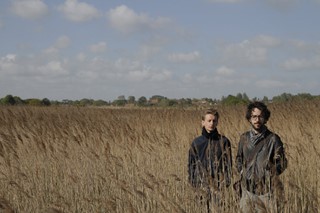 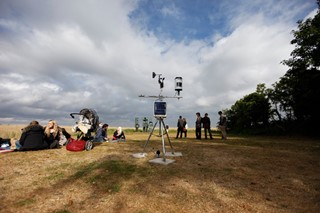 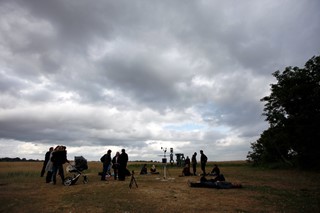 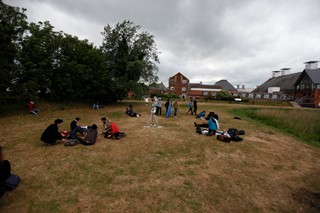 The UK’s dodgy weather might be a bummer for most of its inhabitants, but for London-based sound artists James Bulley and Daniel Jones it provides the ideal, diverse conditions needed to make the most of their ingenious, climate-interacting sound installation ‘Variable 4’. By utilising a meteorological station and some computer trickery, Variable 4 uses parameters from live, on-site weather readings to conduct and playback music written by Bulley and Jones.

This curious process allows the pre-recorded cellos, synthesizers, violins, drum-machines and other instruments to build a constantly evolving blend of music which, in places, shows similarity to work of Steve Reich and Fennesz. The end of last month saw the duo being invited by arts and music organization Faster Than Sound to install Variable 4 in the converted Snape Maltings site in Suffolk, as part of FTS’s Soundfields event. On hearing that the project would run for only 24 hours on, Dazed trekked down to the site and had a chat with the guys to see first-hand what was going on.

Dazed Digital: So, in a nutshell, what is Variable 4?
James Bulley: So, Variable 4 is basically an elaborate composition, complete with score, for weather systems. In a bit more detail, it’s a generative, 24-hour, 8-channel, site-specific audio installation that interacts with live weather data. Most of the equipment, including the eight p.a. speakers used to play back audio and the small weather station itself, is embedded outdoors, in the grounds of a site. This is so that people can hear the music whilst experiencing the weather that’s generating it, at the same time. We’ve created this version of Variable 4 specifically for Snape Maltings.

DD: Can you break down the processes involved and detail a bit about how this all works?
Daniel Jones: Well, there’s a number of different components… Information about what the weather is doing in real time is logged by the weather station and sent, via a data connection, to a computer that’s running several different software processes. This includes info such as temperature, humidity, wind speed, wind direction and also solar radiation; we then use these to work out how changeable etc, the weather is.

The software basically assesses and collates all of this different infomation and uses it to determine the direction and the sound of the musical output, navigating through different musical movements, each of which is made up of pre-recorded score and audio fragments. Different movements basically represent different weather conditions. There are 24 of these movements and the piece, through the weather info, works its way through them. We’ve devised a master score, or a ‘map’ of these movements, which depicts their relationships and can help people visualise how this works.

James Bulley: The music we recorded beforehand for all of this purpose is quite varied and purposefully reflects the different types of weather that might be experienced whilst the piece is running. So for instance, we’ve recorded some more melodic bits of music for if the weather’s sunny and, say, quite textural stuff as a reflection of when it’s windy…though we’ve been keen to avoid the obvious clichés, like, y’know, timpanis for thunder.

Alongside the music in each movement, there are also algorithms, which are data-driven processes that play back and modify musical elements according to shorter-scale readings of the weather. So, for example, the direction of the wind will be processed and might make the sound rush around from speaker to speaker.

The 24 movements cover all of the major and minor Western keys. It changes from one movement to another given a change in the weather conditions, and as long as they are tonally sympathetic; we’ve laid out the score according to the circle of fifths to make this as likely as possible.

If the weather conditions don’t allow for a tonally sympathetic progression then the piece enters what we’ve called a ‘wormhole’, which is essentially an atonal, arrhythmic bridge that sounds quite musically ambiguous. So, for instance, one wormhole is simply a multi-channel recording of the sea. The wormholes basically allow for an easier and less jarring musical transition between movements.

DD: How did you decide on the name Variable 4?
Daniel Jones: It comes from our shared love of the shipping forecast! Part of the meteorological jargon that brings nostalgia to anybody whose parents listened to Radio 4 when they were young! Here, in relation to wind patterns, “variable” denotes the direction, and “4” the force.

DD: How did the project come about?
James Bulley: We were commissioned to do this piece after a guy called Crispin Dior - who, by the way, runs Stag & Dagger - heard its previous incarnation in Dungeness. He drove out just to see what was going with it all. Crispin then mentioned it to Joanna Seguro from Faster Than Sound. She arranged a meeting with us; we discussed about the piece and what we next wanted to do with it and she brought us here, to Snape Maltings.

DD: And how did you meet and start working together?
Daniel Jones: We met at Lewisham Art House, at the New Cross Art Prize, right?
James Bulley: Yes. We were both showing work and so naturally struck-up a conversation. After discovering we had shared interests we pretty swiftly came up with the Variable 4 idea and so we tried to go about doing it.  Shortly afterwards we won a PRS award for the concept. We did our first version of this installation, at Dungeness in May 2010. This is the second installation.

DD: What do you want people to take away with them?
Daniel Jones: The original motivation behind the piece was that we wanted to use it as a way of encouraging us and others to explore the surrounding environment, and to present people with a landscape that they might not be familiar with. We don’t just want people to stand and listen to the piece and leave;  we want them to hear it, then walk around the surrounding area and maybe come back and hopefully become more aware of what’s around them because of it.

DD: What’s the next step for the project?
James Bulley: Well, in regards to the more immediate future, we’ve been invited on June 22nd to go to The Book Club in East London to talk about the project. The place is like a cool arts and talks venue. We’re going to be installing out 8-channel system in there and will be playing back bits of the piece. We’ll also be having a panel discussion with various people like Jo Seguro, the curator of this Snape installation; Cecilia Wee from Sound and Music; and Nick Ryan, who’s a BAFTA award-winning sound designer. We’re going to try an 8-channel DJ set controlled with wind sensors, ha-ha! We’ll see how it goes!