On the tenth anniversary of his death, we explore the life and art of one of anime’s most prolific rule-breakers, from Perfect Blue and Millennium Actress to Tokyo Godfathers and Paprika

There aren’t many filmmakers who can interrogate reality as captivatingly as Satoshi Kon. The Japanese filmmaker, who died ten years ago today from pancreatic cancer at the age of 46, is one of the most respected creators of anime, a director who’s often uttered in the same breath as Hayao Miyazaki and Katsuhiro Otomo. While his interest in the possibilities of cyberspace and the nature of mass media can draw comparisons to the work of David Cronenberg or Olivier Assayas, Kon was a singular cinematic mastermind.

Blurring the lines between performance and identity, the tension between the real and unreal, and the very porous line between illusion and materiality, Kon’s work steered clear of conventional anime tropes, in which narratives often fall into sci-fi, fantasy, or romantic genres. His novel approach to animation took cues from live-action auteurs such as David Lynch, Terry Gilliam, and Alfred Hitchcock, and ultimately led Kon to develop his experimental style of filmmaking, characterised by its heavy use of overlapping scenes and jump cuts. Using camera trickery, Kon’s narratives would slip and slide amorphously into each other, like dreams – techniques that, violent at times, could evoke the psychological breakdown of a character’s psyche (Perfect Blue), or gently tumble into one another like memories (Millennium Actress).

While contemporaries like Miyazaki were busy building fantastical worlds filled with rolling green hills and blue skies, Kon’s universe looked inwards, his narratives frequently turning to performers who experience traumas that lead them into liminal worlds where the real and unreal mingle. His fascination with intriguing female characters came in part from his interest in shojo manga, like Whisper of the Heart (later to be made into an anime by Studio Ghibli), and recall what Sharalyn Orbaugh defines as “uncertain, mercurial, elastic,” possessing a “slightly confused but seductive vulnerability”. But Kon’s portrayal of his protagonists is not to be taken at face value: his overt use of gaze, among other techniques, demonstrates a strong social consciousness – several of his works, Perfect Blue, Tokyo Godfathers, Paranoia Agent, are not only grounded in contemporary social issues, but serve as clear critiques of Japanese society.

In January, nearly a decade after his untimely death, Kon was posthumously celebrated by the Annie Awards, an annual ceremony in Los Angeles, dedicated to animation. He received the Winsor McCay Award, described as “one of the highest honours given to an individual in the animation industry in recognition for career contributions to the art of animation.” Previous recipients include Ghost in the Shell’s Mamoru Oshii, Osamu Tezuka AKA the godfather of manga, and Walt Disney, to name a few.

Despite his relatively short life, Kon, with a small, concentrated body of work, created a universe. On the tenth anniversary of his death, we remember the life and legacy of one of anime’s most prolific rule-breakers through four key works. 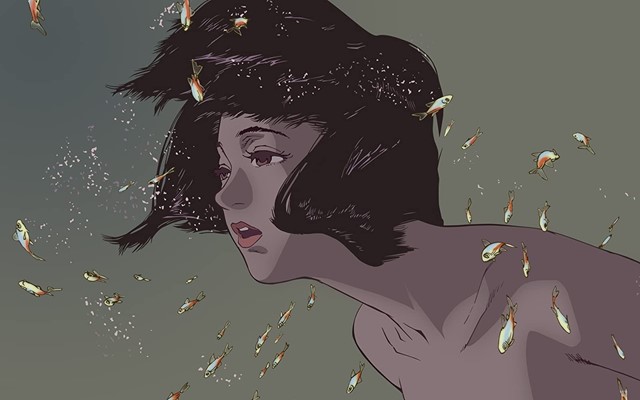 The film that jumpstarted Kon’s career, Perfect Blue was originally meant as a live-action film. But after the Kobe earthquake of 1995 damaged the production studio, reducing the film’s budget to an animation, the project was handed to Kon, who developed his experimental storytelling in response to the film’s tough budget and runtime constraints. Based on Yoshikazu Takeuchi’s novel by the same name, Perfect Blue – at its most basic – is a complex and shocking psychological thriller about a pop idol whose decision to leave her career to become an actor has extremely disturbing consequences.

Perfect Blue announces its preoccupation with perception, identity, voyeurism, and performance right from its opening sequence. Before any credits, the ‘camera’ focuses on a group of Gundam-style Power Rangers, before pulling back to reveal a stage performance. It’s a warm-up, we’re told, for a group of pop idols, called Cham. As they finally go on stage to perform to their fans – who are all men – the title flashes on the screen, and the scene cuts again to lead member Mima seated on a train looking at her reflection.

Within minutes, Kon establishes a number of themes – among them, that what initially appears to be real, isn’t. As Susan Napier writes in her essay Performance, the Gaze, and the Female in the Works of Kon Satoshi: “The perception of reality cannot be trusted, with the visual set up only to not be reality, especially as the psychodrama heights towards the climax.” Throughout the film, Kon sets the viewer up, showing what appears to be a real sequence of events, only to pull back to reveal a TV set or stage.

Often these scenes comment on what’s happening in Mima’s world. In one scene, Mima, who’s recently discovered an obsessive fan account dedicated to herself, utters the words, “who are you?”, before the scene jumps to her saying the same line on the set of a crime thriller, Double Bind. It’s through these jump transitions or misdirections that the viewer’s spatial awareness is destabilised: the viewer not only begins to question the protagonist’s perceptions but their own (Kon refers to this as a “trompe l’œil”, a french art technique which means to ‘deceive the eye’). As Mima’s mental state spirals, Kon tricks the audience further. What initially appears as “real” is revealed as hallucinations, dreams, or paranoid projections, making you further question the parameters of reality. 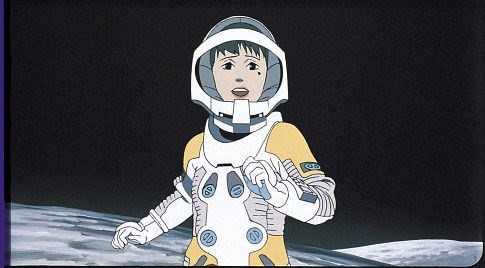 If Perfect Blue shows the horrors of idol-dom, Millennial Actress is its mirror image. Featuring an actress, an obsessive fan, and the blending of fiction and reality, Millennium Actress sheds the pathological gaze of the former in favour of an elegant and uplifting one: a shining ode to the golden age of Japanese cinema, told through the life of a fictional actress, Chiyoko, whose story is unveiled through dreamlike sequences through her oeuvre.

Described by the New York Times as a “headlong cartoon love letter to the grand tradition of post-World War II live-action Japanese cinema, from samurai epics to urban domestic dramas to Godzilla,” Millennium Actress has all the hallmarks of Perfect Blue’s experimental style. Opening with a space scene (and, most likely, a Death Star reference), the camera zooms out to reveal a film set. But unlike Perfect Blue, where the camera trickery feels disorientating and violent, Millennium Actress is a tapestry where scenes tumble into one another. Unconstrained by chronology, Chiyoko walks in and out of period movies, which not only serve as narratives to her personal history, but also the history of Japanese cinema itself.

Kon – through the symbolism of a key – unlocks a past that’s both personal and national. In the earlier scenes, the viewer is shown pepperings of early twentieth century Japan, such as the Japan’s colonisation of Manchuria, the later rise of anarchism and Marxism, and its subsequent crackdown. The portrayal of these periods – which have, until recently, been rarely spoken of in contemporary Japan – demonstrate Kon’s social consciousness and how acknowledging the past can better the future. 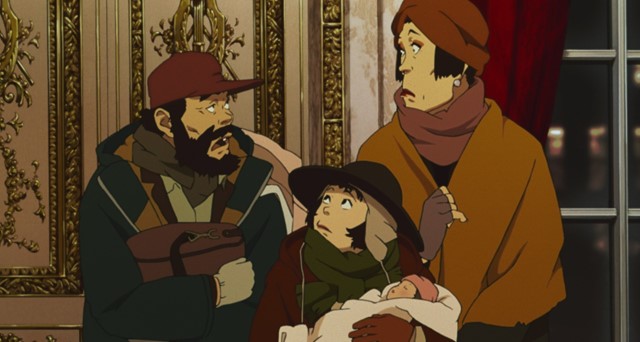 Tokyo Godfathers is more linear and steeped in realism than Kon’s other works. Taking place on Christmas Eve, the film – inspired very loosely by John Ford’s Three Godfathers – follows a bande à part of homeless people, middle-aged alcoholic Gin, teenage runaway Miyuki, and flamboyant trans woman Hana, who discover a baby in a pile of rubbish in Tokyo. As with Kon’s other films, Tokyo Godfathers opens with a performance within a performance, only this time, it’s an ideal far removed from the lives of our protagonists. The audience sees a group of children singing a Christmas carol, before – classic Kon – widening the shot to reveal a stage set, a nativity play at a soup kitchen.

Though it doesn’t partake in his other films’ examinations of media, fan obsession, and technology, Tokyo Godfathers is concerned with identity, and the hastily drawn stereotypes that confine us. Led by Kon’s unflinching focus on real-life subjects’ (the homeless, LGBTQ+, and immigrant population of Tokyo) that are rarely shown in film, bar the occasional two-dimensional trope, Kon uncovers the truth behind these characters, their defensive self-deceptions, and backstories.

Transcending the strict boundaries of the patriarchal gaze, Kon picks apart the idea of the nuclear family in favour of a chosen one. It’s here that Hana takes on the role of ‘wife’ to Gin and ‘mother’ to the abandoned baby who she names Kiyoko, while Miyuki adopts the role of older sister. When the unlikely quartet finally track down who they believe to be the baby’s biological mother, it turns out to be a farce, further breaking down the preconceived idea of what makes a family.

There’s an emotional nuance to Tokyo Godfathers that, paired with its roots in realism, sets it far apart from his other works. It’s neorealism-inflected plot is sprinkled with hints of magical realism – and what ultimately makes it such a rich and deeply satisfying entry in his filmography. 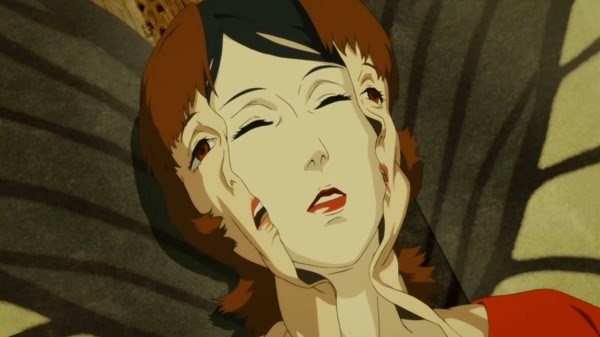 Paprika, based on Yasutaka Tsutsui’s 1993 novel of the same name, marks a return to and elaboration upon Kon’s themes of reality and unreality, fact versus fiction, fantasy and memory, and the often blurred lines between them. Kon had originally wanted to adapt the book after Perfect Blue but budget restraints meant that the project was put on hold. Despite this, Kon has spoken openly about the influence of Tsutsui's book on his work, speaking in Andrew Osmand’s Satoshi Kon: The Illusionist: “I read the novel when it was published and it made me want to incorporate the idea of dreams fusing into reality into my movies, so that’s what I did with Perfect Blue and Millennium Actress. Now, I’ve made the source of my inspiration into its own film, I’ve got some closure.” Paprika is, then, an amalgamation of Kon’s filmography to date, a working through, and conclusion of, the style of filmmaking that inspired him in the first place.

Watching Paprika feels like stepping into Kon’s mind, complete with porcelain dolls, froggish dream parades, and gargantuan parades of kitchen appliances that literally run amok throughout the film. Seamlessly merging the individual psyche with a collective cyberspace, the film begins with Dr Chiba treating a police detective using a piece of technology called the DC Mini that can access people’s dreams. When the DC Mini is stolen, the doctor’s free-spirited computer avatar, Paprika, bends time and space, changing her identity with ease, from Disney’s Tinker Bell to the Sphinx, and everything in between.

Each dream sequence in Paprika nods to Kon’s various movie inspirations. The most blatant, perhaps, is The Greatest Show on Earth that manifests as a tumultuous circus Pee-wee’s Playhouse parade of anthropomorphised toys, gadgets, historical monuments, and religious icons. As Paprika bounces from one dream to the next (in a near-identical style to Cham Mima in Perfect Blue), she passes scenes from Roman Holiday and James Bond’s From Russia With Love, again highlighting Kon’s love of live-action. It’s the sort of deranged dream logic that only Kon could pull off.

The film ends with the detective visiting a cinema showing Kon’s earlier works, a final self-reflective joke, perhaps. While Kon wasn’t to know that Paprika would be the final film (see: Dreaming Machine) he’d complete before his death, it serves as a poetic conclusion to his filmography, however much we’d like to dream otherwise.