Drawstring details and elasticised panelling were the main themes in the South Korean sisters' latest collection, besides conceptual shirts and coat pieces 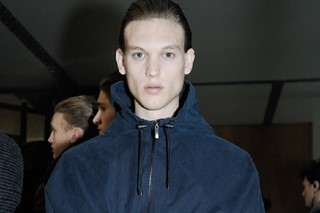 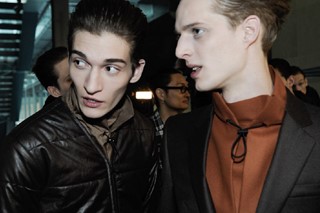 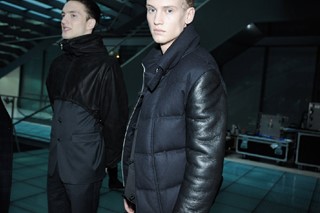 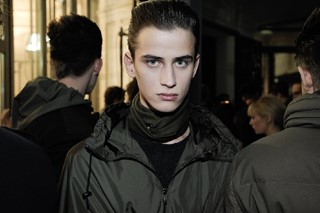 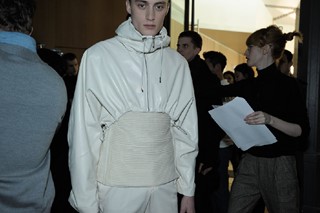 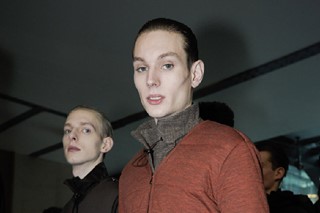 These two South Korean sisters are going from strength to strength and have, in the last few seasons, established themselves as a must-have pit stop on Sunday's gruelling menswear schedule. Wooyoungmi, who made their name on the native market  with an eye for advanced sartorial details, has of late started looking at the bigger picture which last season led to conceptual play on shirts versus jackets and coats. Also a refined shoe aesthetic has begun to form in the brand's Paris studio. For this season, all focus was moved to the practicality and function of the clothes. Technical fabrics were played out against standard luxury materials and garments were twisted to fit with a 21st century urban lifestyle.

Drawstrings and elasticised strings panelling some pieces were the main design themes. The drawstring featured at the waist, on collars and elbows, meaning that the garments could be adjusted to fit individual needs. Detachable hoods, sleeveless neoprene T-shirts, nylon trousers and turtlenecks continued the sporty theme in beige, brown, khaki and green. The functional parade was interrupted abruptly by a few gorgeous sequinned tops that brought a bit of glamour to the proceedings. The best pieces, though, nicely combined the two Wooyoungmi themes as an olive green quilted trench coat with knitted sleeves and a M65 jacket in wool with knitted sleeves entered the catwalk.

Dazed Digital: How would you sum up the general idea?
Wooyoungmi: For this collection we combined the practical part with the elegant part of our clothes, making it about functionality and sport as much as style and luxury.

DD How did that translate onto the catwalk?
Wooyoungmi: For example, we had coats and jackets as usual but we added the strings at the back, and we put the wind breakers on top of the suits.

DD: Was that a scarf or a top looking like a knotted scarf, it was difficult to say from where I was sitting...
Wooyoungmi: It was a bib, meant to look like a scarf, it was intentional.

DD: Do you have a favourite piece?
Wooyoungmi: The double layered coats.