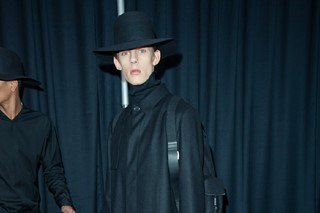 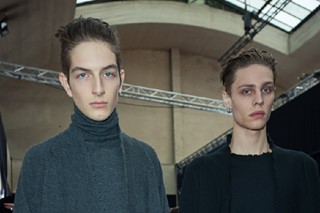 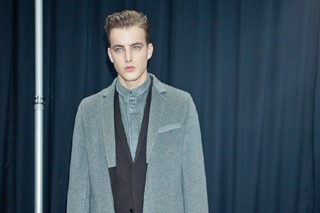 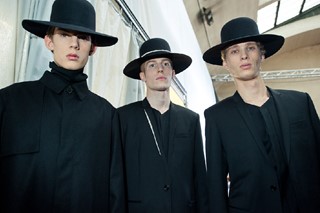 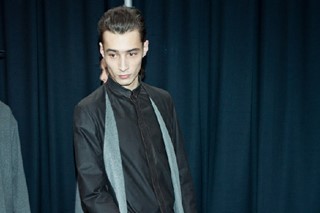 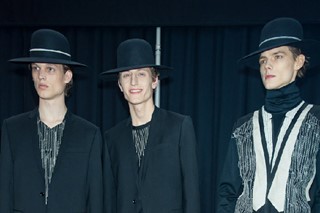 Kris Van Assche took his Dior Homme in a more casual direction for the Autumn Winter collection. Focused on a looser shape, the Belgian designer showed casual knits and comfort tailoring. Initially zoomed in on grey and beige, the palette soon widened to classic Dior Homme black before surprising everyone with several bright red outfits. The colour did us well and in general, Van Assche struck a chord with belted suit jackets, razor sharp lapels and a dripping stitch pattern that appeared on both tops and outerwear. Magnificent capes also helped make this a vintage Dior Homme show.

Dazed Digital: Loads of strong colour this time around, Kris!
Kris Van Assche: A lot of brown and grey as an alternative as an alternative for black, and the red because it felt like the only true colour for this season...

DD: Also a quite loose silhouette, were you thinking about comfort!
Kris Van Assche: After the Summer show which was very fluid, I found doing the same for this season difficult because of the stiffer fabrics and there more layers. So we had to work with double sided cashmere to make the coats with no inside lining.

DD: What other fabrics are you using?
Kris Van Assche: A lot of it was cashmere, and some nice wools-

DD: Was there a general idea behind the show?
Kris Van Assche: To bring out the real classics of the male wardrobe, that's why there's pleated trousers, hats and trench coats for example. They're all real classics but we've always seen them in a stiff way so it was about loosening up all that.

DD: Do you have a fave piece in the show?
Kris Van Assche: The first outfit, the big brown over shirt with two big pockets, that's bringing the shirt to its most fluid!