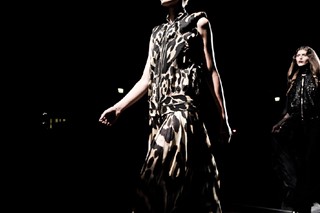 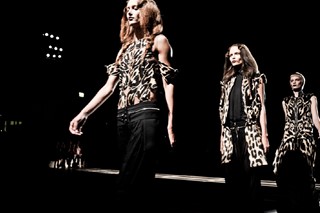 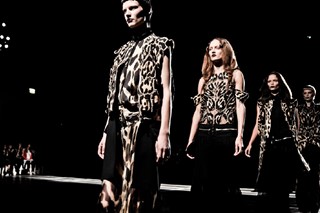 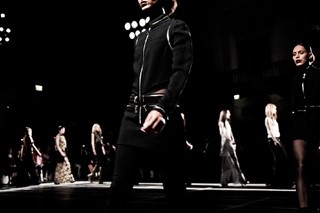 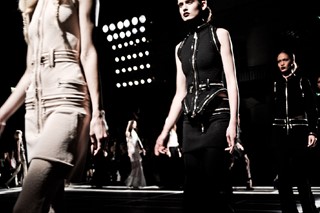 Repetitive one-note collections have been both confusing and delighting audiences across the fashion weeks, but when it's Riccardo Tisci for Givenchy honing in on an idea to the thumping and euphoric beats of Salem, you are jolted and almost instantly have to heed the repeated mantra of the night. For S/S11 that was leopard prints, the starring motif of this headstrong collection. Zippers formed the methodology to shape and rein in the leopard in the slimline silhouettes that saw skirts over trousers or chiffon trails, waistcoat over jacket over shirt, all streamlined by the sharpest cuts that were form-fitting without being too strict. The flow of it all was aided by the abundance of chiffon that introduced a seductive element to counter the hardware and the roar of the print. Going back to the print, it was presented in various forms, keeping to its natural palette but played up in various textures - as a texturised leather with the spots raised, as a subtle print on black so that the spots reflected in the light and enlarged to the point where the leopard print became abstract and started resembling something else. Juggled with the zippers and the flow of the chiffon, as well as a slicked mode of layering that Tisci has switched on so intuitively, after Mariacarla Boscono's exit and despite the repetition, we were hungry for more.