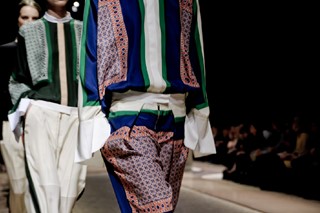 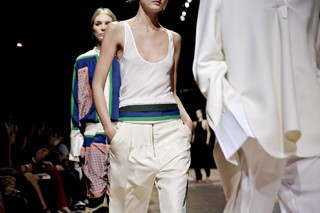 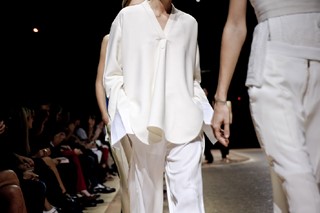 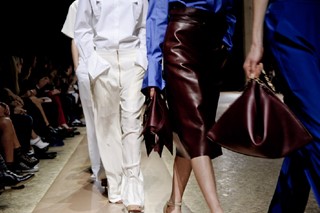 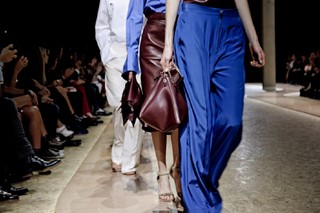 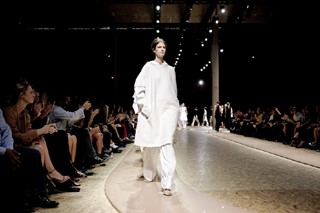 Has it only been a year since Phoebe first debuted her groundbreaking show for Celine? It might feel like eternity given the enduring impact that to this day doesn't seem to want to disappear anytime soon. It's to Philo's credit, as well as her nature, that she didn't suddenly want to do a 180 just to flip everyone out and change the tide that has affected fashion so profoundly. Still, in the latest collection, there was an evolution that tread new waters, whilst also making what Philo has brought to the table at Celine concrete and a done deal. So the simplicity of everything that has gone before was there with expanses of white, ivory and other delicate shades that has pervaded the season, emphasising the flow of a low slung and loose trouser, the crispness of a nehru collared shirt with patch pockets, or the sharpness of a bonded viscose cape. The leather elements that made such a impactful punctuation note in the last two collections turns here up in the form of a deep burgandy sleeveless and panelled tight top, contrasting with the looseness of the new trouser shape.

If there was a slightly strict purism to the seasons before, Philo relaxed a little, incorporating summer get-away in the subtlest way possible with hints of North Africa creeping in through shades of deep Moroccan blue and burnt orange forming stripes across a top, as well as down the sides of trousers. The attributes of a Moroccan djellaba robe also came filtering through the shapes. More craft-based elements could be seen in a hooded coat and halter top, woven with a raffia patternation. More evolutionary elements include the introduction of print which saw scarf foulards placed precisely on the white shirt and trousers to give a graphic effect that dimmed the associated 'fussiness' of a foulard. All of these little measures don't mount up to calling this collection a Moroccan jaunt as you get the feeling that Philo is never going to resort to themes but there were definitely hints that her purist aesthetic will be infiltrated with outside elements to move it forward at the controlled pace Philo wants to go at.