For his SS17 collection of geometric ‘techno-couture’, the Japanese provocateur seeks to ‘enhance street style’ 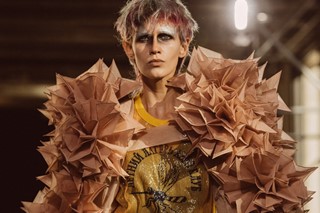 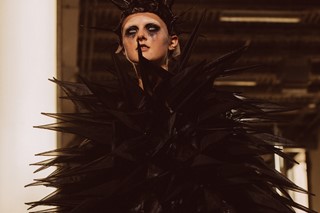 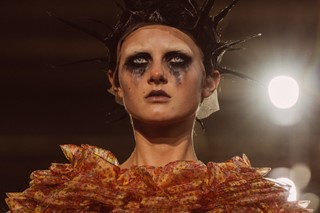 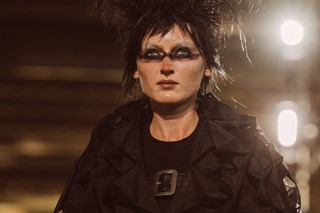 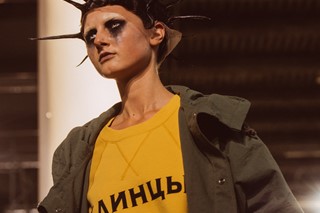 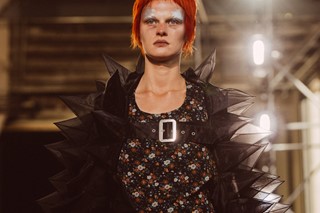 Geometric techno-couture or subcultural subversion. Those are roughly the two lines of exploration that Junya Watanabe has embarked upon over the years, so that his compendium of “greatest hits”, as it were, includes both a deconstructed biker jacket and artfully patchworked jeans, as well as dresses with paper lantern hems and lattice-cut fringing. Yesterday, these paths converged as, according to his press team, “Watanabe-san wanted to present an enhanced vision of street style. For him neither extreme construction or streetwear stand alone stylistically – they are complementary, and when merged together, stronger.”

It takes a strong constitution to handle a string of Nine Inch Nails tracks at 10am on a Saturday morning, but an even stronger mind to know what they’re all about when they don motocross trousers bearing the words 1Extreme or a thorny explosion of spikes rendered in organza. For authenticity, Watanabe looked to the Berlin graffiti crews 1UP and Berlin Kidz to extrapolate from. The back of one of Watanabe’s finely cut trench coats read “Feed the kids with garlic to find them in the dark.” Smeared with a mix of metallic silver, grit and black by Isamaya Ffrench, these razor-edged rebels were on definitely on the night prowl, ensconced within their own counter cultural plane.

“For (Watanabe) neither extreme construction or streetwear stand alone stylistically – they are complementary, and when merged together, stronger” – Junya Watanabe SS17 show notes

Embedded beneath layers of geometric-constructed armour were the things we all recognise from thrifting as a form of sartorial protest: cut-up German band t-shirts, de-girlified floral and lace dresses, and anti-corporate tailoring. Backstage though, the organza spikes looked like they were mirroring the similarly prickly wigs created by Kiyoko Odo, but as individual garments they neatly collapsed down and were then placed into specific travel sacks.

It’s this contrast of extreme precision and control with the apparent spontaneity of graffitied trenchcoats and chopped up t-shirts that enables Watanabe to avoid the hackneyed pitfalls of punkish tropes. Moreover, it falls in line with that subversive Japanese knack of taking a subculture or a street style aesthetic that isn’t necessarily their own, and taking it to new heights of extremity. This season Watanabe’s continued preoccupation with manipulating fabric into 3D form took on a new significance, as the undulating and interlocking interplays of black nylon somehow exposed new dimensions and new angles to the deathly familiar.