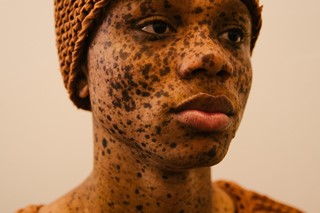 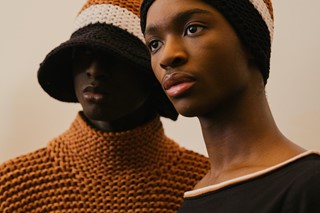 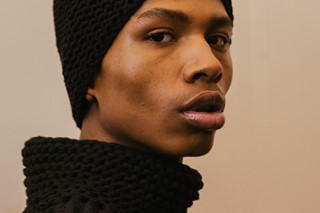 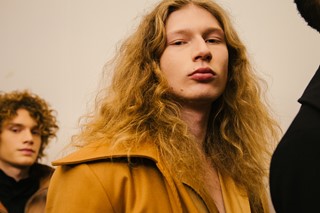 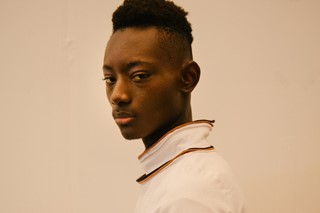 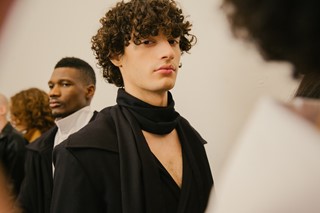 As models strutted down the runway at Teflar, a robotic yet calm woman’s voice narrated each individual look like some weird, dystopian 90s shopping network. The music behind the voice sounded like a warped rendition of The Exorcist (1973) theme song, intensifying the sense of discomfort. The tenseness in the scene and programmed voice could have been Telfar Clemens’ commentary on our desensitisation to a culture of consumption, or the narration might just have been intended to make the looks easier to digest and fabrics easier to identify. It turns it, it was the latter.

“Fatima Al Qadiri narrated the collection and composed an original piece of music to go along with the vocals,” Telfar explained in reference to the soundtrack. “It’s a style of show music we have used before in our SS14 runway show that we wanted to revisit for AW16. We thought that the collection had a lot to do with the illusion of formality and the misrepresentation of fabrication, so we felt like we needed to describe what items were and how they are used.”

As always, Telfar built on his genius “Simplex” theme by taking classic silhouettes like jeans, scarves and tees, and giving them a not-so-traditional element. This season, sweatpants were sewn as if leggings and shorts were layered, and sweatshirts were given an ultra-feminine cross front neckline. “A big part of the design technique in AW16 had to do with layering and the illusion of a layer,” Telfar said. “Each t-shirt design used a black, white and brown layered binding detail constructed of strips of jersey; this same idea of layering is then applied to heavier garments to create stripes that double and pockets, and layers of jersey that build themselves into outerwear pieces.”

A particular focus was put on functionality this season – interesting and necessary details like pocketed scarves and cut-outs to reveal fortified lining were featured on the runway. Telfar took the standard middle-class uniform and everyday basics and threw them off with unique, 3D textile techniques like detailed weaving. “A lot of designs were inspired by casual basics and contemporary workwear,” he noted. “I also was inspired by formalwear for both men and women and the idea of applying this style of dress to everyday dress.”