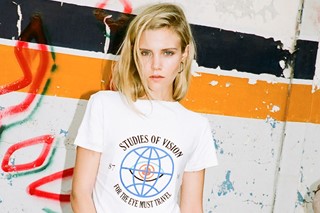 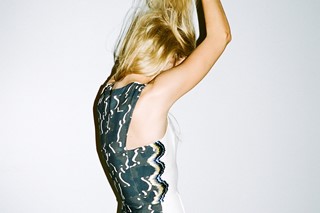 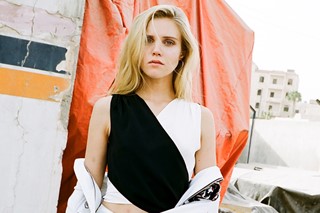 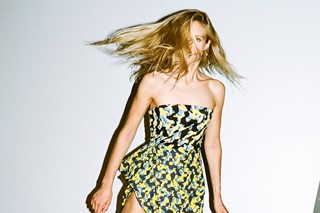 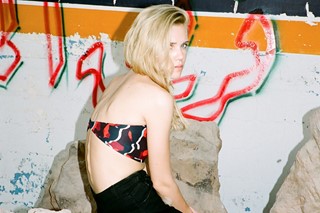 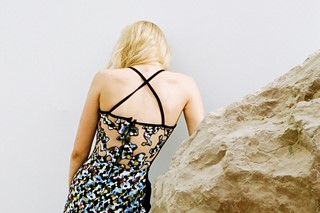 After graduating from London’s prestigious Central Saint Martins, Jordanian Nafsika Skourti has set her sights on Dubai. Her third ever collection “Temporary Security” – which has its influence rooted deeply in the Arab world – was shown at Fashion Forward Dubai SS16, the new platform for Middle Eastern designers which aims to bring international attention to designers from the region. She is now one of the finalists for the Style Arabia DDFC Fashion Prize.

Her designs have always echoed her deepest personal preoccupations. Her first collection explored the opposition between corporation and spirituality, inspired by her sister’s experience of feeling crushed by the world of investment banking and seeking refuge in meditation. The show was a sensory experience  – the audience was plunged into darkness as the room became filled with snippets of solemn speeches by Nawal El Saadawi, the uncompromising Egyptian feminist and political activist preaching the core values of revolution: know, act, form a collective. An army of models dressed in military prints burst in to a spectacular mash-up soundtrack of Arabic classics and bass-heavy rhythms. They patrolled between bright orange hanging construction tarpaulin curtains for an industrial feel. As Nafsika imposed her young, electric vibe on the runway, each outfit carried its own visual message of texts and symbols: “I was imagining a fashionable protest.”

Her second collection reflected the anxiety she felt for her mother's health – anxiety which translated into glitch prints of the flowers her mother would receive at the hospital, juxtaposed with violent symbols like knives and wires. Finally, Temporary Security, although not strictly political, addresses the experience of being young in a war-torn region and the oh-so-relative concept of being safe and secure. Nafsika is profoundly disillusioned by the neighboring countries’ endless fights for more power, resources and land. The words “borders” and “television” face each other on fabric, acting as a commentary on our generation's dual priorities: young people want to be politically aware, but entertainment is always just around the corner.

Having lived in different countries and learnt to speak both Arabic and English fluently, Nafsika thought a lot about language and miscommunication, in particular a feeling of frustration caused by the amount of information and beauty lost in translation. The messages on sleeves in English and Arabic calligraphy are direct translations of one another; an attempt to bridge a failure of understanding. The military influence is also clear. Skourti warped and saturated the print to the point it no longer resembled a camouflage print: as she puts it, “military made beautiful”. Models wear targets, a dove brings a burning match instead of an olive branch. An F17 fighter jet flies on a denim jacket and her signature couture embroidery lines begin to resemble a blurred TV transmission or a messy frontier. She resorted to Googling symbols, to find visuals that would be immediately recognised and understood by all. The designer also collects old books and other printed material where typography and images interact, feeling particularly inspired by the graphics on stamps, which are both artistic and historical primary documents that tell the story of their time. She feels fashion collections can also potentially reflect a social climate as well as one's own inner world.

“The words ‘borders’ and ‘television’ face each other on fabric, acting as a commentary on our generation's priorities: young people want to be politically aware, but entertainment is always just around the corner”

This girl has travelled the world but claims she is still enamoured by her hometown, its sky, and its silence, even if it is still fashion virgin territory: “Wherever I go, I am always looking back at Jordan.” Skourti works from her family home, where she has transformed the master bedroom into a sewing room and surrounds herself with her closest friends whom she says all hold magic. In individualistic cities like Dubai or London it's easy to become exhausted from constantly trying to fit in, climb the social ladder or be seen in all the coolest places. In Jordan Skourti finds people more genuine, and this comfort zone helps her remain honest and true to her feelings when creating.

Like many, Skourti soon grew bored of flawlessness and perfection in fashion and now believes strongly in the necessity of maintaining an “ugly percentage” to make an outfit interesting. “Your work becomes stale if you don’t take the risk of (it being) ugly.” Using ugliness as a source of inspiration, she managed to morph kitsch 90s designs into edgy outfits. A car in flames – a staple during the conflict – also resembles a tuned car's tacky decoration. Her t-shirts are screen-printed to resemble the kind that your Dad got once on a work trip at a pharmaceutical conference. She also confesses her excitement over the street style of guys in Downtown Amman decked out in fake Adidas.

“Wherever I go, I am always looking back at Jordan” – Nafsika Skourti

Moreover, every piece is created to fill a void that the designer identified in her own wardrobe, and Skourti practically works from a checklist. Her team of utilitarian “festival jackets” are tailor-made for Glastonbury, engineered in a lightweight silk-cotton blend and laden with useful pockets that negate the need for a bag. The back is embroidered in her signature zigzag pattern, and the inside of that jacket holds a hidden message: “Waiting is forbidden!” which only the wearer can read. She keeps this party context in mind when designing backpacks and bumbags for clubbing – the designs are amongst some of her current best-sellers, all made by a Syrian artisan forced to flee his home in Halab. Another problem-solving piece is the so-called “ex-boyfriend” strapless dress: an emergency for when your ex is expected at the party. The soft neoprene and mesh corset, slightly padded, is designed to look good on everybody.

It's refreshing to meet such an ambitious yet humble young woman and share her practical as well as political views about fashion. Nafsika clearly means business and is on her way to building an empire. She doesn’t want to be a niche designer, with her clothes only appearing in fashion editorials or photo shoots. She makes clothes with passion and integrity for “young, international, normal people” and checks her price points to keep them accessible. Not content with just being a designer, she also wants to become involved in education and establish an exchange program with Central Saint Martins in the hopes of accelerating the fashion industry in the Middle East.