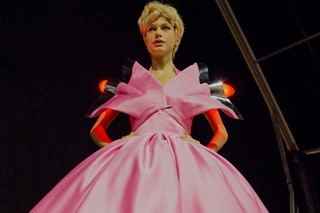 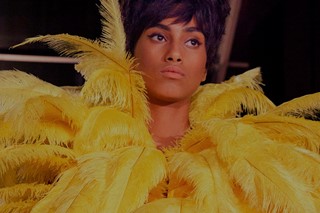 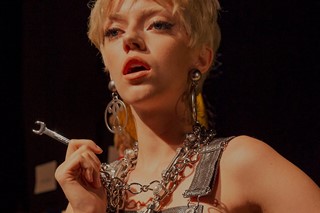 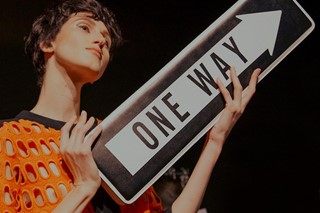 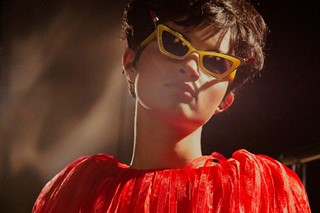 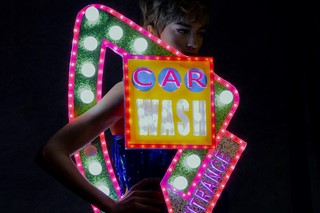 When Jeremy Scott puts a sign on his Moschino catwalk telling you to fasten your seatbelt, you know you’re in for a ride. Guests arrived at last night’s show to find a runway that looked like an under construction road decorated with signs, but ones where ‘Stop’ had become ‘Shop’ and ‘Dangerous Curves Ahead’ turned into a warning about ‘Dangerous Couture’. On the catwalk itself were giant car wash archways with lights shining red, yellow and green, while the “Toot toot, beep beep” riff ripped from Donna Summer’s “Bad Girls” played on repeat. Scott muse CL (currently featured in Dazed's new issue) was there in a dress covered with teddy bears, as was Sita Abellan, star of Riri’s smash “Bitch Better Have My Money” video.

The lights came up, and out marched Lexi Boling in a fluro yellow Chanel-esque suit, like a luxe highway maintenance outfit, complete with pussy bow blouse in warning orange. There was model Stella Maxwell with a bag like a traffic cone, Pyper America Smith wearing silver dungarees and a tool belt, and Hanne Gaby Odiele in a CAUTION print skirt and jacket combo. The music, mixed as always by Michel Gaubert, was as he put it, “very theme-y” – think “Warm Leatherette”, “Drive My Car”, “Car Wash”. “You can’t go all intellectual for a show like this,” he explained backstage. “We all let loose and be cute, camp, sweet – whatever you want. It’s fun! there’s no pretence – it’s like, this is what you get, this is what you hear. It’s like the clothes, it’s like the set. It’s a fun pop culture moment.”

That pop culture moment found its climax when, halfway through the show, the carwash spun into life, spraying hundreds of bubbles into the air as model Stella Lucia marched through its rotating brushes in a look that was a clear homage to Dior’s infamous New Look – only this time it came covered in giant graphic words that looked borrowed from a supermarket shelf, “BRAND NEW LOOK”. While Scott certainly draws enjoyment from being literal (see the giant feather dresses that resembled the brushes of the car wash itself, eliciting laughs of joy from the audience) that’s not to say he hasn’t got substance, as evidenced by the collection’s riffs on fashion history. “I just wanted to throw people for a loop – I can do sophistication, I can do dressy,” he explained of this part of the show. “But still playful, still me, still Moschino.”

Notably, models walked with energy and excitement – Anna Cleveland (whose mother Pat was a Moschino muse) practically vogued her way down the catwalk, narrowly avoiding taking out a couple of her fellow walkers as she spun around to great cheers from the audience. “I talked to all of the models,” Scott revealed backstage. “I told them what the mood is and how to behave, that they are sophisticated and they are in a hurry and they are on a construction site but they’re too rich to be here and all these people are paying attention to them but they need to go! The key word was ‘cunty’!”

Master hat maker Stephen Jones – who first worked with Scott 20 years ago in the designer’s Paris days – made traffic cone and road sign fascinators, but don’t get caught thinking that these were like the plastic hard hats mailed out as invites. “I said well, we have to have hard hats, but let’s make them in the most expensive satin we can find,” Jones explained. “The work in the traffic cone hat is incredible. It’s actually all tiny hand appliquéd pieces of straw that were hand woven to make the structure of it. That’s a thing, yes you can do fun things but they shouldn’t be plastic, like the stop sign was really fine patent leather. So in a way you’re making familiar objects, but in a very luxurious way.”

“I said well, we have to have hard hats, but let’s make them in the most expensive satin we can find” – Stephen Jones

Of course, the show was not without those easy Scott designs that will fly off the shelves (like the Powerpuff Girls pieces and Bella Hadid’s “Fresh” t-shirt). The shirt’s matching iPhone case has already sold out since going online, proof (along with the crowds standing outside in his designs) that Scott’s clothes have a magnetism – and price point – that appeals to more than the fashion crowd. Speaking recently to Dazed on the launch of his new documentary, The People’s Designer, Scott explained the reasoning behind his humorous, accessible take on fashion. “You know, we live in such a serious world nowadays. The only things that go on that are absolutely appalling and dramatic and I hope that my work can be a reprise from that and be a break – we still have to find joy, we still have to have a laugh. And if I can put a smile on people’s faces for even a minute, I think that’s mission accomplished.” He certainly succeeded last night.