With a collection that drew on the darkness and duality of the area, Pugh rallied against its gentrification 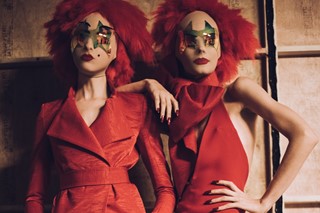 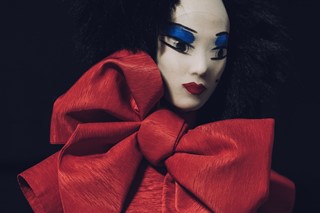 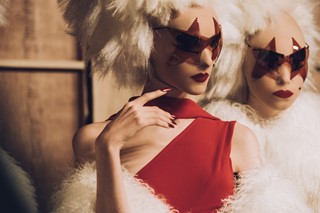 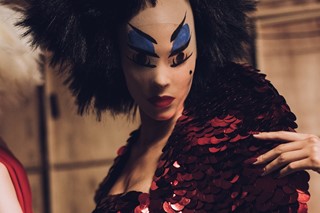 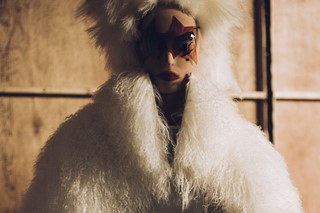 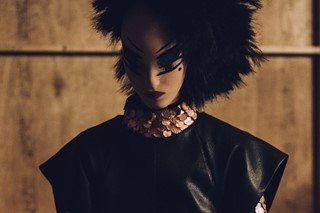 Last night, crowds gawped as people spilled from Soho’s Brewer Street Carpark – the new centre of the London Fashion Week circus – dispersing into the city’s streets after Gareth Pugh’s SS16 show. Paparazzi flashes fired in seizured bursts, attempting to catch glimpses of a celebrity guest making a getaway, while tourists held up camera phones, not quite knowing why. Heading out to their next show, dinner or party, many of the fashion gang will have passed the hollow shell of legendary nightclub Madame Jojos just a few doors down, its windows boarded with metal sheeting after it was forced to close last year (the club, famous for its drag, cabaret and Kubrick cameo, is in a building now owned by redevelopment company Soho Estates). Although likely far from the minds of many who will visit the space over the coming days, the irony of the relocation of fashion week amongst what is commonly described as the death of Soho was not lost on everyone.

For Pugh, who returned to the LFW schedule in February after seven years away with a full-throttle tribute to Rule Britannia, it was this “high-speed gentrification” coupled with an invitation to show in the new space that gave his collection its eureka moment. Soho’s sticky-floored hedonism, and the Wonderland-esque possibilities that seem poised to reveal themselves down its maze of neon lit alleyways, hold a particular charm for the designer. “For me Soho’s a little bit like Disneyland or a fairground, it’s about fantasy or escapism, you can go there and be somebody else,” he said backstage. “It’s like when Madonna arrived in New York and she asked the cab driver to take her to the centre of everything – if that was to happen in London I would think the cab driver would always bring someone to Soho.” Thanks to his studies at Central Saint Martins’ Charing Cross Road campus (now luxury flats, where an “exclusive” two bed will set you back a stomach-churning £4.25m), Pugh credits the area as a formative part of his growing up in London.

“For me Soho’s a little bit like Disneyland or a fairground, it’s about fantasy or escapism, you can go there and be somebody else” – Gareth Pugh

And indeed, with their backless halter tops, basques and helter-skelter inspired gowns, his towering beauties were like leggy alien creatures you could only imagine emerging from the darkness of a Soho street. They came with shocks of coloured hair by Malcolm Edwards and bright make-up painted on face-distorting bank robber masks by Val Garland, a look Pugh described as “a little bit Lindsay Kemp, a little bit Divine, a little bit Leigh Bowery and a little bit sick and twisted”). Lucky pennies that were a nod to the Soho as a fairground theme, (and also presumably a middle finger to its rising rents) covered the runway and adorned dresses like paillettes, while enormous red sequins and flares were a nod to Donna Summer and days of disco – after all, the 1970s were arguably the last decade before Soho’s death knell began to sound. One dress, shredded into red strips, recalled the curtain that might hang in a sex shop door, keeping out prying eyes.

These girls were glamorous but grotesque, statuesque but strange – you couldn’t quite see their faces, because they were whoever you wanted them to be. It’s this sense of duality that Pugh was intrigued by, and channelled into a film with longterm collaborators Ruth Hogben and Katie Shillingford, which debuted yesterday on AnOther Magazine. It stars a city trader by day, pole dancer by night – whose tales of “coming home early in the morning and wiping off make-up and putting on a suit and going to work” epitomised the spirit of London’s underworld for Pugh. In the short, she spins and twirls against pulsating lights, hypnotic but mysterious, cloaked in shadows and wearing looks of latex and twisted black and white checks that recall Pugh’s earliest shows, inspired by London clubnights like BoomBox. But the self-referential elements that cropped up throughout the collection were not about nostalgia: they are just things Pugh has in his arsenal. “I don’t feel like I’m going backwards,” he explained. “For me this felt more optimistic, hoping for something else in the future. it’s just something that’s part of my history like Soho is.”

From the 1950s bohemia documented by John Deakin to Corinne Day’s visions of 90s hedonism, Soho has captured London’s creative imagination for decades. Dazed had an office there, as did Alexander McQueen, the worlds of fashion, art and sex rubbing shoulders. The neon lights still flicker in its windows, but it remains to be seen what will become of the area. “Rape, murder – it’s just a shot away” belted out the first line of Matthew Stone’s specially mixed soundtrack, and its message couldn’t have been clearer. “Soho’s changed a lot,” said Pugh. “We can’t stop change, but I think sometimes it’s important to realise what’s good and bad about it.” That he did last night, proving that despite the developers and luxury flats, there was still a heart beating in Soho.