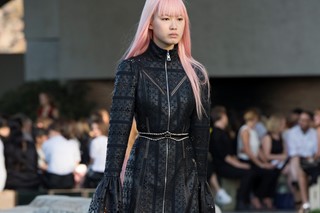 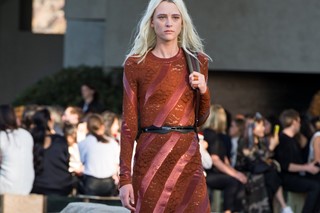 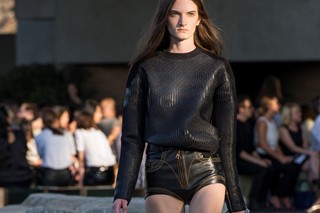 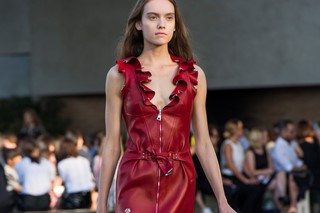 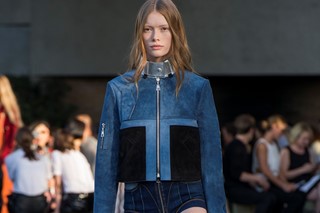 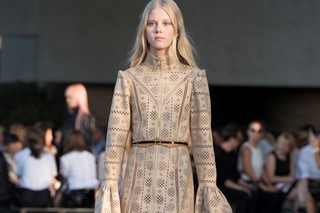 We knew we were in for a trip. The curious resort spirit of this desert oasis had by now seeped into the international journalists who had ventured out for Louis Vuitton’s second Cruise show. As we drove up the steep incline to approach Bob and Dolores Hope’s space-age house, designed to resemble a volcano by famed Californian architect John Lautner, only then could we truly understand the scale of the surrealism. Then came the Liquid Sky-esque ensemble of vaguely asexual and strangely beautiful beings, dressed in Louis Vuitton’s pre-AW15 brights and painted with Ziggy Stardust makeup. They wafted around the venue, like apparitions that might have just been in your head. As Ryuichi Nakamoto’s score from The Last Emperor struck up, the models one by one descended into the setting sun, expressing different facets of a layered woman that Nicolas Ghesquière has been carving out since he started at the maison. Navajo, grunge, hippie, steampunk, Victoriana – there were all those recognisable tropes and more. But just as Ghesquière has put his contemporary slant on retro classics, these tropes were turned inside and out and came out looking otherworldly. As we watched this ever-morphing Louis Vuitton woman, emerging from a brutalist volcano, overlooking the red-hued desert, you knew you were tripping. In the very best possible way.

“The Louis Vuitton woman isn’t just one thing – I try to convey that with every collection but here, she was freer and more fluid than ever.” It wasn’t just the collection that was diverse but the casting also reflected this multi-faceted character which Ghesquière seeks to dress. Once again unconventional newcomers like Tamy Glauser and Erika Linder walked the show, with current Louis Vuitton muse Fernanda Ly closing it. Ethereal Pre-Raphaelite beauties converged with grungy alt teenage girls. And with that extraordinary desert light hitting them, they were all beautiful in their own idiosyncratic way. That in itself felt like a strong missive of this cruise outing.

Ahead of its time and out of this world:

Backstage, Nicolas Ghesquière said that he was inspired by the brutalism of the house contrasted with the bygone era of Hollywood – Palm Springs after all was the getaway designative of choice for the stars. Displacement of time has been a recurring theme in Ghesquière collections. When referencing the 60s or the 70s, he creates a new sort of retrofuturism. As we sat there with one eye on Lautner’s masterpiece, which was so ahead of its time and the other looking out towards the epic Coachella Valley as the sun was setting, our senses were displaced. That’s how free flowing peasant dresses with in-built leather harnesses worn with trainers, Hollywood gowns with armour-like shoulders, tightly cropped bomber jackets and hot pants all fell into place with one another. You couldn’t fix the time period as Ghesquière traversed from decade to decade. It’s perhaps the most diverse and free-thinking expression yet from Ghesquière’s tenure at Louis Vuitton. No doubt it was the strange allure of Palm Springs and its desert surroundings which inspired this newfound freedom as Ghesquière said he felt entirely in tune with his surroundings: “I like to enjoy the dryness of the desert but at the same time to feel we’re in the richest green place.” There was certainly richness abound in this collection.

Watch the show below: