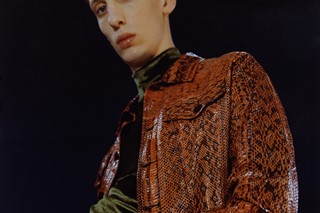 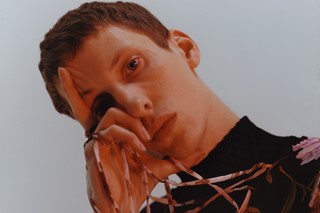 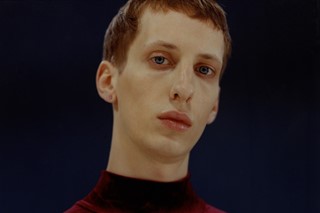 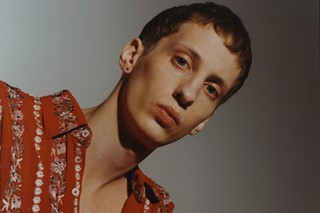 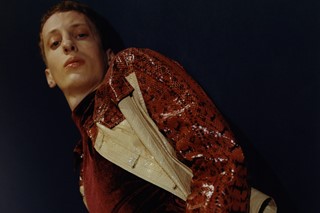 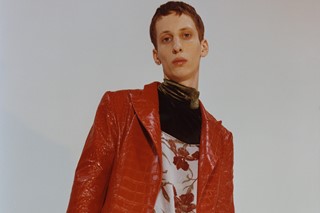 In his live-in studio in Hackney, fresh from his acclaimed graduate collection as part of Central Saint Martins’ BA Fashion Show in 2014 and surrounded by old issues of Shoichi Aoki’s FRUiTS magazines, Simon Hantai’s books of abstract art and myriad fabric samples, Ed Lee went straight to work on what would become his first collection. Armed with his trusted team – all family members, his mother overseeing production – and with Ariel Pink’s Mature Themes ringing out on a loop from the office speakers, Lee designed beneath the same moodboards that inspired his graduate pieces, a fantasia of drapery and sparkle.

Research images detailing tailoring techniques from the 70s abounded – most notably, images of the Italian designer Romeo Gigli’s creations; those romantic, shawl-collared, gentle-shouldered sheaths of the 80s and 90s. Gigli famously won acclaim for pioneering the renaissance of elaborate beading, for reinvigorating the use of drapery, of luxury fabrics; he championed velvets and silks and brought modernity to the fabrications of decades past. The fruits of his labour hang in postcard form, pinned to the studio walls. Once he had finished his debut collection, Lee, in his somber uniform of white t-shirt and APC jeans, looked over his drawings, over the samples of his first full collection. As with Gigli, there were innovative versions of fabrics from the past – 70s lamé now slick and contemporary, manipulated and modernised against beading and dramatic draping. Lee’s fabrications were lush and luxurious, too: only this time, it was the boys who were to experience the renaissance.

How does this season relate to your graduate collection?

Ed Lee: It’s more or less an extension. Like that collection, it’s a more casual reinterpretation of the 20s flapper style mixed with 70s glam. To me, the 20s was the beginning of modern dressing, and at the same time there were still traces of the past, like in the textiles they used. This is what I find intriguing, this transition. What interests me about the 70s is that it was almost like a celebration of cultural diversity. It was a time when traditional values were questioned, and that led to an explosion of individualities – and among all of them, Sparks’ glam-rock style has left a huge visual impact on me.

You street-cast the model for the lookbook, was that important for you?

Ed Lee: It just seemed natural to do street-casting simply because street culture is such a great thing about London. We see these really amazing kids wearing things their own way. They have such strong points of view and I have always loved that. Street culture to me is a scream of individuality, and it really fascinates me to see the reappropriation of existing clothing. When we saw our model, Jan, on the street, the whole team fell in love with him. He has a very ‘realistic’ vibe about him. It was refreshing to see how Jan reacted to the clothes physically and emotionally, and that is what our team was craving.

You say you appreciate honest design, what do you mean by that?

Ed Lee: I was really impressed by the way Yves Saint Laurent drew inspiration from different cultures and brought so many new styles to fashion – for example, the Mondrian dress and the African collection. What Hedi Slimane is doing now at the house is also great in the way that he did not get trapped by such a strong heritage and he is really pushing the house in another direction. I’m really inspired by artists such as Paul Poiret and Andrew Logan. What interests me in their work is how they introduced different cultures and smashed them into something inspiring and provocative. These are all honest pieces of work, challenging the way things are done.

How do you choose your fabrics?

Ed Lee: I often get inspired by couture. I love couture because I enjoy seeing the effort being put into each garment. I appreciate the value of that artisanship. My work really is about recycling, about reinventing and reappropriating artisanship.

You borrow certain womenswear signifiers for your menswear – silhouette, pattern, palette. How much does gender play a role in your aesthetic?

Ed Lee: Maybe my collection plays with these (things) because I don't have the commercial pressure, so I just go with what I like. As a result, there are more non-traditional menswear suiting fabrics, colours. This can give the impression of gender-bending, something which is currently happening in menswear. But honestly, I don’t really think about gender too much when I am designing. It’s usually the fabrics, colours and textures that are the first things I start to play with, and then from there things start to happen.

“What interests me about the 70s is that it was a time when traditional values were questioned, and that led to an explosion of individualities.” – Ed Lee

Do you think these design elements no longer belong to a single gender these days?

Ed Lee: I just think men in our generation have less pressure to behave or dress in a certain way or to adhere to a certain type of masculinity. We are, maybe, a little more free. We assimilate information so quickly now as we are constantly surrounded by an enormous amount of it, and I guess as a result people are just more open-minded. It is now more down to how a person presents himself, about his own individuality rather than his own biology, his gender.

Are there rules with menswear or is it limitless?

Ed Lee: Are there rules? Yes and no. I do think the traditional tailoring side of things such as Savile Row won’t go away – and there are definitely rules for those clothes. But on the other end of fashion, menswear is limitless.

So there are no boundaries with contemporary men’s fashion?

Ed Lee: I don’t think so. Or at least, I personally don’t believe in that, it is always the honest designs that push me out of my comfort zone that I appreciate. But it depends on where you are in the world and how culturally open it is. Personally, I would say fashion codes no longer exist because I live in London and all my friends are free thinkers, but it would maybe be different if I were elsewhere.

The ‘glam rock’ edge to the collection harks back to David Bowie in his famously gender-neutral Ziggy Stardust days.

Ed Lee: Yes, although I think back in the Bowie days it all felt like a statement. But, honestly, I don't see gender as a statement now. It is not good, it is not bad. It is just how society has evolved.

On the Rise is a new monthly column taking a closer look at some of fashion’s most promising new talents. Revisit this page to keep up with the latest features