I want to break free: tired of the corporate city, the designer’s muses stage an escape in scribbled scarves and silk-screen prints 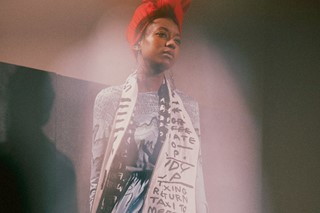 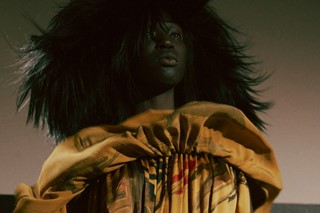 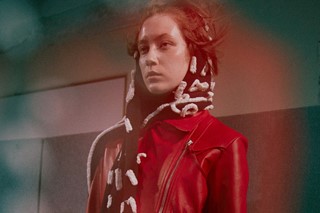 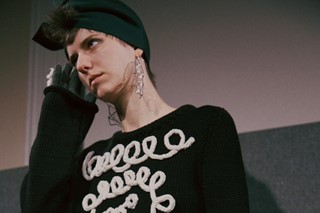 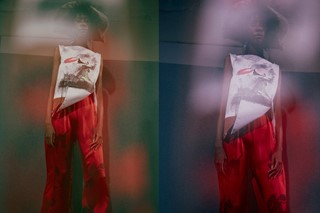 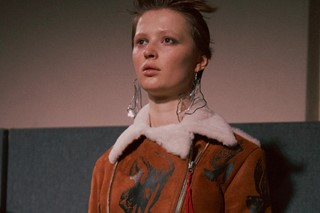 Claire Barrow stayed close to home for her third sponsored NEWGEN show, taking influence from the everyday challenges, conflicts and banalities (weather, housing, corporate power and city dressing) that come with living in London. “It’s about the mundane ease of everyday life, taking power from within yourself and flying away from London,” she explained. A comment on the evolving political and cultural climate of the capital, Barrow channelled these elements and asked: ‘where does youth stand today?’

For a young designer in a city undergoing heavy gentrification, disruptive housing developments and the quelling of club culture, was this Barrow’s love letter to London? “It’s a bit of everything to do with the London climate at the moment. I can see that it’s getting more and more rich and it’s really changing,” she explained. “This whole office thing is maybe a comment on that,” she said as she signalled to the grey-carpeted show space, “but then there’s [a hybrid between] the outdoors. I’ve moved into a flat where I live and work, and it’s a really modern new build flat. I just see this sort of thing every day – the grey carpet and stuff like that.” Titled “High Flyers”, Barrow toyed with the inner battle between chasing corporate power and, literally, 'flying’ away from it. The responsibility that comes with attaining it and growing older versus the desire for freedom and unshackling from the city, escaping the office and going outside. To symbolise this duality between inside and out, fans were placed in front of the models, which caused their hair to be swept in to their eyes and also sent Barrow’s signature silk-screen prints akimbo: “It’s like when you walk past a skyscraper and it’s really windy so all your clothes get tangled. It’s that struggle of wearing clothes in the city.”

Transparent perspex trompe-l’oeil earrings were warped into mini silk scarves blowing in the wind, courtesy of Barrow’s collaboration this season with London jewellery designer Tatty Devine. Long woollen scarves were scribbled with ominous advice and observations: “don’t forget: cold + wet”, “donate tomorrow”, “tidy up” and “taxing return for a taxi return.” Towels swept hair up into messy turbans – a nod to the mornings when you’re too deep in the corporate grind to even dry your freshly washed locks. Youthful details came from ballet flats and Barrow's girlish and ghoulish illustrations, scrawled on leathers, stockings and silks.