This is England: the visionary British designer marks his return to London with a collection steeped in history 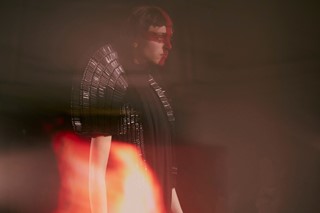 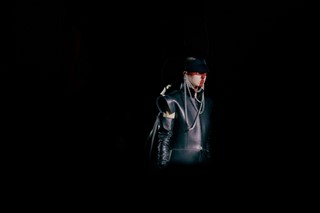 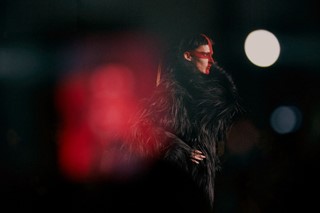 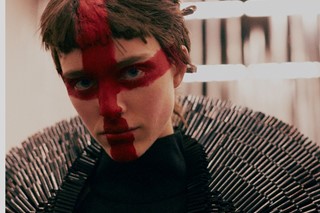 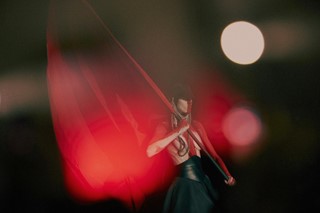 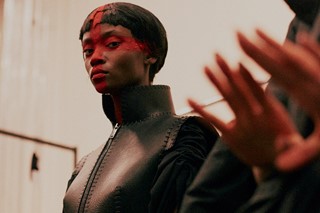 A love letter to Britain:

Gareth Pugh has always taken his references from the complex corners of the scientific and the digital worlds, but today’s show was a love letter to his roots. Britannia was personified on the runway, a life-force rather than a tokenistic motif, with red as its powerful signifier. At first it took the form of a blood-soaked woman in a new short film by collaborator Ruth Hogben, projected inside the show space causing the Renaissance paintings inside the V&A to reflect its flames. Then it made its way onto the models’ faces, adorned with Saint George’s Cross make-up – the work of collaborator Alex Box. But these were more than tired references; this was the spirit of England. The chaos, the passion, the hope, the love, the hate, the history – all came together in Pugh’s vision. After all, yesterday's show marked his return to London after 7 years in Paris, and signalled 10 years of the brand. Pugh was going to stir things up on his home turf – and he did.

The sound and the fury:

"The Sunderland football chants were Gareth’s idea. He told me at one point he was worried that his dad would join in with the chant," laughed long-time collaborator Matthew Stone backstage, who composed a new score for the show. "The rest of the track I built from scratch and it was supposed to be something that was totally uncompromising. Over the years, I think that we've developed a language with the music that we’ve made. It's sort of this like slow techno, EBM and Belgian new beat infused thing. And so, in that sense, there’s definitely a mood to start from. In a way, tonight was so different to things that we’ve done in the past, and I think that was important. But then it's still this very serious show soundtrack, and then a really fun finale. I think that is very much part of Gareth's world and I think it’s a very good way of understanding his work, and a metaphor for his work, because it’s this big vision, and it’s other-worldly; it is Gareth’s world, and the music has to reflect that. But then also, there’s just this little reminder that he does have a sense of humour, and that he knows what he’s doing and he’s fully aware of what he’s doing. And I think that it’s nice to try and be able to try reflect that in music."