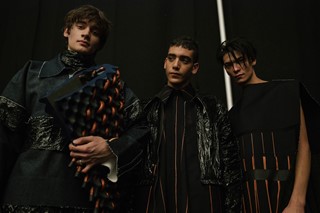 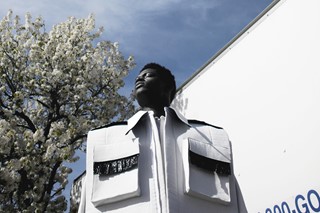 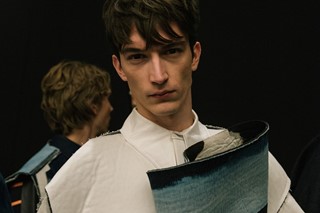 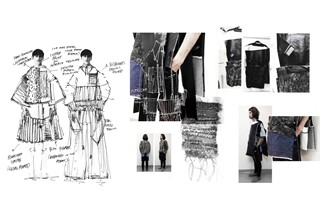 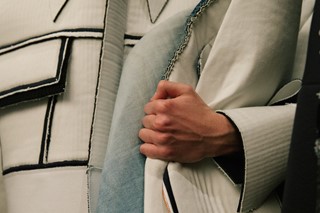 “As a kid that moved so much, I didn’t feel I belonged anywhere,” admits designer Ximon Lee, who this week made his NYFW debut as one of four web-cast designers in VFiles’ AW15 show. The tiny village where he was born between Manchuria and Siberia may be a long way from New York, the city he now calls home, but in the structural sandwiched denim and melted bin bags of his designs, Lee finds inspiration in the world he left behind. Get to know him in these definitive quotes.

“We are living in a digital world – everything flows fast, we’re able to share information so quickly. To be unique is tough nowadays because you are subconsciously inspired by so many visuals – you always see art around you that will come into your work. I agree with that idea that there is nothing new under the sun. Denim already exists, I didn’t invent it, but I try to treat and dye it in different ways.”

“I studied abroad at CSM for a year, and during that time I started researching documentaries about the collapse of the Soviet Union, and how people formed their own communities to survive. One film touched me in particular – The Children of Leningradsky [a look at Moscow’s homeless youth]. It was just the feel of it. It reminded me of these vivid memories of where I was born in the far north of China – a lot of our architecture is Soviet-inspired, and the ghost of the USSR is still there: the big grey buildings, abandoned playgrounds.”

SURVIVING IN THE SUBURBS

“I decided in a week that I should travel from London to Moscow. I went there and luckily discovered a suburb where I could document some of the architecture and the people. I looked at how the kids were dressing themselves, taking whatever they could find – some things were ill-fitted, some were awkward on their bodies. There’s this random layering to cope with the winter – it’s a style that comes from survival.”

“For this collection I got a lot of clothes from the Salvation Army or recycling stations – I would gather garments and deconstruct them. The techniques I used were more mature than my graduate collection; the washing and the bleaching were much more expressive. I got to really play with things without worrying which treatments would work and which wouldn’t. It’s really the technical part of design that I spend most time on – the denim has to be pre-treated and bleached – sometimes with thick bleach, sometimes straight bleach, sometimes literally painted on with a brush. This collection is really about experimentation – everything was a surprise because I never knew how things would turn out, sometimes it’s just up to the chemical.”

“The last few weeks have been overwhelming but exciting; after all, six months ago I was still in school. Every day I get more emails – because I don’t have a team I have to handle everything myself – but having your work in the spotlight is what every young designer strives for. I don’t know what’s next, I just know I need to get ready for it. The only advice I would give others is to be honest – honest to your design, honest to your story and honest to yourself.”

On the Rise is a new monthly column taking a closer look at some of fashion’s most promising new talents. Revisit this page to keep up with the latest features.