‘Kids here roam the streets at night’: Shayne Oliver and his crew hit Pitti, set on subverting Italian tradition and inspired by the dark side of Florence’s streets 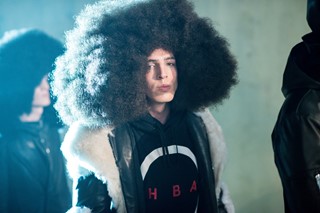 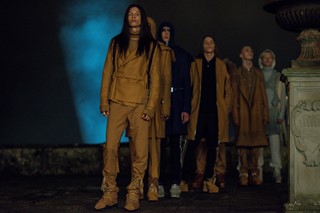 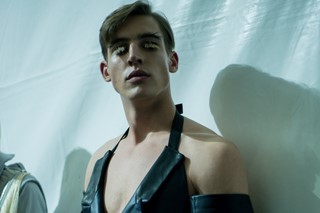 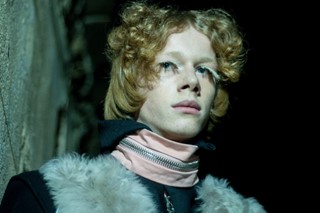 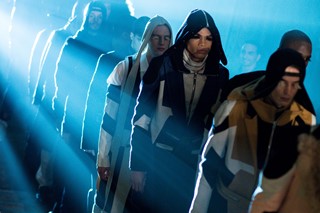 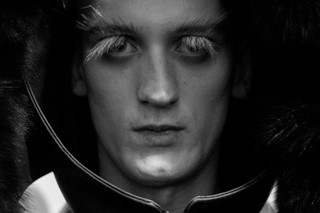 How do you sum up Hood By Air? Fluid in gender as well as references and born from an art collective-like crew, there’s the text and then the subtext. Last night, as Pitti Uomo’s special guest, Shayne Oliver and co added new prose to HBA by embracing the time-honoured Florentine menswear tailoring tradition, and its hallowed codes – and then thoroughly subverting them.

The impeccable elegance of a camel coat was chopped up so it hung off the body and exposed the shoulders, the waistline on formal trousers stood away from the body to reveal stitched-in underwear in a play on baggy, low-slung streetwear, and classic fringe-tongued shoes morphed into 70s, camp high-heeled boots, set off by supersize afros and a pounding soundtrack specially composed by Arca.

“We were like, since this is going to be a special project, let’s just do what we normally ignore and deal with that first, and then work backwards and do us. You know, what makes us feel sexy and what we need and don’t want from menswear,” Shayne Oliver said backstage of the collection, with its pastel hued palette and girdle corsetry worn over suiting. It was an electric meeting of polar opposites, and exactly what makes Pitti such an exciting and dynamic part of the menswear schedule.

The show took us up to the imposing Fattoria di Maiano in the hills outside of Florence, where the estate’s tapestry-walled, fortress-esque villa loomed against the night sky and spotlights swept the garden terrace runway amidst an unsettling pre-show score. Yesterday, Dazed previewed the photography book accompanying the collection. The empty British countryside plays eerie backdrop to the HBA universe, while the rural Florentine setting was equally removed from the trademark streets vibe of the brand.

But ultimately, Hood By Air is about claiming your own space to be whatever the hell you want to be, and the surreal setting enhanced this sense of something “Other”, thriving in even the oddest of locations. These were kids playing with pagan sci-fi rituals in the countryside; hiding under dark fur-lined hoods and long, white eyelashes, in occult-like outerwear laced with wisps of silky horsehair. It was a secret society, out in performative force for all to see.

“The collection was based upon someone who was more noble than style, someone who was on the outskirts of the city. We came to Florence and immediately felt like there should be some kind of youth energy going on, so we came from this place of this noble, rural thing to try to push some sort of energy out of it,” Oliver commented.

But bored kids in the countryside often get up to even weirder stuff anyway, right? “I agree. And kids here roam the streets at night. That doesn’t really happen in New York anymore. I guess I wanted to do something that felt as an ode to that,” Oliver said. Setting up shop in Milan recently also played into this, he explained: “Even Milan is so dark. New York is not as dark as Milan is. Trust me. Some of the clubs here, it’s very extreme. And New York isn’t right now, so it was kind of cool to feel that.”