First Joan Didion, now Joni – all hail the rise of the over-70 campaign star 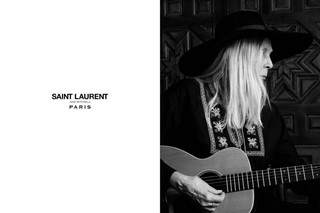 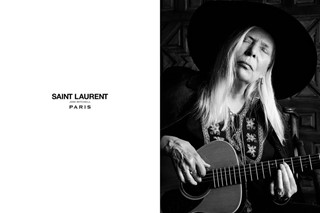 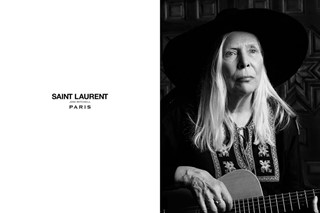 Two days ago, Céline announced literary hero Joan Didion as the new face of SS15. Now Saint Laurent has unveiled none other than 70s folk icon Joni Mitchell as its latest campaign star. That's two bona fide legends in less than 72 hours, both of whom are over 70 and are still luminaries in their field. Fashion, you're spoiling us.

Mitchell was photographed by Hedi Slimane for the designer's ongoing Saint Laurent Music Project. In the past, he's lensed musicians including Ariel Pink, Courtney Love, Kim Gordon and Marilyn Manson for the series (you can check out the images here).

The west coast singer-songwriter was photographed at her home in Bel Air, California – seriously, did you expect Joni to live anywhere other than California – and wears a Saint Laurent folk tunic and fedora as well as a leather cape custom-made by Slimane.

And it's clear that Mitchell's natural style chimes perfectly with Slimane's vision for SS15. Just check out this image of a young Joni in the 70s: