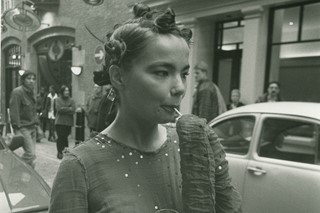 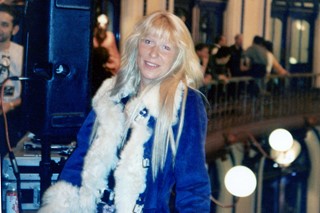 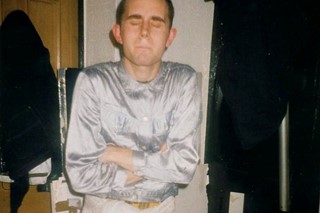 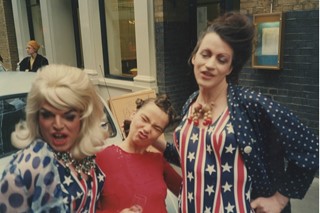 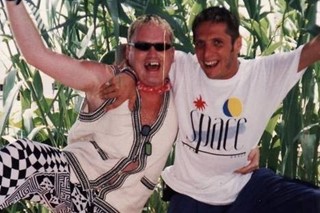 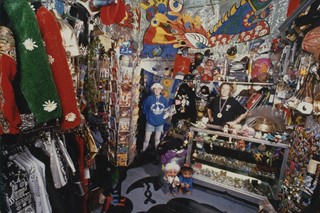 Berkshire Goes Balearic is the second documentary in our #MusicNation series. Directed by Tabitha Denholm and produced by Partizan, it premieres tonight at 12.05am on Channel 4. To mark the occasion, we’re celebrating all things Balearic rave culture – from the club-ready baggy acid prints and Ibiza-inspired style, to Boy's Own zine spreads and flyers. In the gallery above, the cast of the doc share personal photos and memories from that hedonistic time.

Eve Dawoud, writer and assistant editor of What We Wore, gives an insight into the style of the club scene:

"In stark contrast to the moneyed society of the late 1980s who aspired to designer clothing, the acid house scene look was superseded by the need for comfort to rave all night long. Characterised by a loose silhouette, to avoid overheating in the raves, an outfit of trainers (Converse, Travel Fox) or flat boots (Kickers, Wallabees), baggy trousers or dungarees and a t-shirt was the norm, for both sexes. Danny Rampling had produced t-shirts emblazoned with a smiley face to promote his night Shoom. The smiley face went on to be the defining emblem of the scene. Easily copied, the acid house look appeared in shops and markets across the country, but even though it was populated by some fashion heads, the look never dominated the music. As Jenni Rampling once said of Shoom: “We just wanted people to come to the club, leave their egos at the door and have fun… after all, we all sweat the same.”

Designer Fiona Cartledge is a key figure in Berkshire Goes Balearic, recalling how Ibiza acid house club culture spread from the Spanish island to London, before exploding onto underground raves in function rooms across England’s home counties. Cartledge dressed the DJs, promoters and clubbers who worshipped the scene, designing under ‘Sign of the Times’ – a venture that moved from Camden market stall, to Kensington and finally a shop in Covent Garden where her creations were picked up by Isabella Blow, Steven Meisel and Vogue.

Here Cartledge tells Dazed about the whirlwind hedonistic scene that drew in everyone from Bjork to Vivienne Westwood; a scene that had flashed and burned out by the early 1990s, yet continues to influence fashion today:

How would you describe the style of the Balearic club scene?

Fiona Cartledge: It’s hard to describe London to anyone who wasn't there at the time, but it felt like a revolution. Clubs at the end of the 1980s had become cliquey and aggressive, but Acid House broke all that down. It was a new generation and they wanted something different. Suddenly overnight parties, raves and clubs sprung up all over the place.

When Acid House hit in 1988 the look was baggy. Sweatpants, t-shirts with smiley faces, Aztec and flower designs, bandanas and dungarees, Wallabees shoes, pendants and badges. Mash on Oxford Street sold the commercial end of the look. The store was in in a large basement and every weekend in 1988/89 they would have a queue several hundred yards long. They’d put a sound system in and people would dance in the shop. Mark Bloom from Komodo was going to Bali and designing batik print hoodies and trousers, which became a staple at every rave.

“London felt like a revolution. It was a new generation and they wanted something different”

Acid House spread like wildfire. At one point in my shop Sign of the Times, which opened in 1989 in Kensington Market having been at Camden Market before, t-shirt styles lasted a month before they were ripped off, so they went out of style quickly.

The club Shoom attracted a more knowing crowd. Along with the rave clothing, Vivienne Westwood was worn; she did Care Bear and Acid print t-shirts. Her staff were going to Shoom and understood what was going on. The Shoom founders Danny and Jenni Rampling printed Shoom logo Tee shirts, as did all the clubs and warehouse raves. Pete and Sue Carney from Bond went to Thailand and brought back hill tribe accessories and fishermen's pants which they sold in their shop in Soho.

The Balearic look came from Shoom and Boy’s Own parties, and the Full Circle parties as Acid House was fading in 1989 /90. Girls started to wear more feminine clothes, and lots of white – especially Ghost loose and floaty dresses. The look had a hippyness, which fitted perfectly with the loved up vibe of the music. Luella Bartley, who was a regular at Full Circle, has since name checked the period as a key influence on her work.

You designed religious jackets; why do you think religious iconography was so popular at this time?

Fiona Cartledge: Religion was definitely a theme at the time. Madonna had recently released “Like a Prayer”, Salmon Rushdie had written the ‘Satanic Verses’, and Martin Scorsese had filmed ‘The Last Temptation of Christ.’ Records were sampling Martin Luther King speeches, and bands had names like The Shamen and The Wonder Stuff. Danny Rampling’s set at Shoom had an uplifting, spiritual vibe, and it seemed to all come together. Shoom was a tiny club in a basement gym in Southwark. The atmosphere was so intense there it did feel religious, like a gospel gathering.

I had been making religious jackets from Turkish carpets I sourced in Portobello and New York, with images of the Last Supper, Martin Luther King and Jesus. I supplied Big Jesus Trashcan in Kensington Market, a seminal shop in the late 1980s. They were very interested in religion, both western and eastern, and masonic codes. My jackets sold very well to bands as they were very photographic – Prefab Sprout, Bob Geldof, S Express, Danny Rampling, and many more.

Where did you find your place in the movement?

Fiona Cartledge: My shop was completely born out of Shoom. I had been on the fringes of the fashion scene for years making my own stuff and selling what I found in New York, but the incredibly positive atmosphere of Shoom gave me the confidence to start what I had always dreamt of: my own store. I wanted to create a rave atmosphere, selling my designs and the incredible work of people I met at raves. I sold fanzines, mix tapes from budding DJs and tickets for raves. We quickly became embedded in the scene, and started our own parties from Christmas 1990, at Diorama in central London.

“We did a fashion show with Dazed and Confused in 1992 at the Vox in Brixton, featured in issue one”

Did you have a favourite look to wear clubbing?

Fiona Cartledge: When I first went to Shoom I was still wearing the fashion at the time: jeans and a cropped leather jacket. But it was far too hot in the club to wear tight heavy clothing. I switched to rave gear like everyone else, and had a Vivienne Westwood acid print t-shirt – which I wish I’d kept!

It was a quick scene – what do you think caused its demise?

Fiona Cartledge: I think any scene that is that intense will burn out quickly, punk was the same. The red top newspapers caught on to the orbital raves and negative publicity started the backlash. It grew so fast that people came to the raves who didn’t really get it. They became known as Acid Teds and took the shine off the scene off for the original people. However, the scene split – as happened to punk – and a strong Balearic network formed, creating the club scene we know now. Many of the original players are still involved in London and Ibiza.

As the scene diminished, and you moved into high fashion, did your design aesthetic change. Was it still a club look?

Fiona Cartledge: When the rave clothing subsided, we advertised for young designers. They were coming out of fashion colleges to no jobs, as the recession of the early 1990s hit. We nurtured these designers and got a unit in Hyper Hyper in 1992, and that's where Isabella Blow and Steven Meisel discovered us. We started to feature in high-end magazines like Vogue and Elle. The trends were the distressed look by Olivier Van de Velde, tie dye velvet by Christa Davies, the baby doll look by Joie, knitwear by Stuart Alexander (as worn by Bjork who was a regular customer), and cheesecloth and sequin designs by Joe Bates – who now designs under Sibling. We did a fashion show with Dazed and Confused in 1992 at the Vox in Brixton, featured in issue one. Rankin and Katie Grand did a shoot for Sign of the Times in Dazed & Confused when we opened the Covent Garden store in 1993.

In the gallery, we feature images and stories from Nina Manandhar’s upcoming book ‘What We Wore’, a ‘People’s Style History’ of British Youth Style, to be published by Prestel in October 2014.

To submit your own photos to What We Wore, email submit@what-we-wore.com