From strippers in Milan to Kate Moss in Calvin Klein, '93 was the year fashion and sex were shaken up for good

In 1993, Calvin Klein sparked outrage when a naked, wet-haired, doe-eyed Kate Moss starred in his “Obsession for Men” campaign, shot by her then-boyfriend Mario Sorrenti. The same year, Moss posed topless for CK Jeans, sparking yet more debate. A girl of her type had never before been shown in this way, and the effect was electric. Redefining the lines of beauty, a bold new concept of sexy was unleashed on Generation X.

Calvin Klein notoriously traded on the intoxicating beauty of youth; over a decade earlier, a 15-year-old Brooke Shields launched CK Jeans in Richard Avedon’s commercial to cries of making femme fatale of a young girl. Though Kate was four years older at the time of shooting, her waifish frame seemed yet more controversial. As the designer told People magazine, “she has this childlike, woman-like thing. It's a kind of sexiness that I think is very exciting.''

Perhaps it was a case of context over content. In 1993, fashion was becoming more and more over-sexed in the push for a glamourous, aspirational lifestyle. Designers celebrated full-blooded sex appeal, driving an aesthetic that was just as opulent as the eighties, yet more revealing, sleeker. Roberto Cavalli introduced raucous animal prints in silky-thin fabrics; Dolce and Gabbana took cue from the film stars of the fifties to riff on the subversive erotica of Catholic symbolism; the virile Medusa’s head presided over a Versace empire that promoted a renaissance in punk and a return to the high jinks of kink.

Fashion was becoming more and more over-sexed in the push for a glamourous, aspirational lifestyle.

Kate represented something fresh. Girls of her ilk had been used by photographers in pages of Dazed & Confused and The Face since the late 1980s, the Calvin Klein campaign was the first time it had been seen by the masses. The American Family Association launched a letter-writing campaign threatening retailers with boycott the label, while bus shelters across the States were plundered for posters in full-life form. The campaign was eventually banned, but the fires of desire for this innocent beauty had been lit.“I just fell in love with that picture. She was one of the first women I desired in a magazine,” says shoe designer Eugene Riconneaus of the ad this month in Dazed & Confused.

In 1994, Liz Hurley flaunted her body in Versace’s safety pin dress; by 2004, Tom Ford had carved out his Gucci logo in the pubic hair of his campaign models. 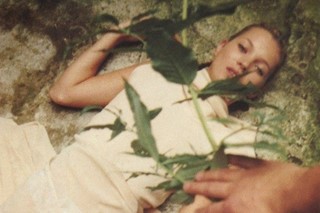 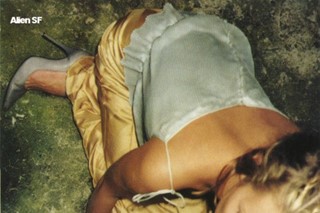 In the two decades subsequent to that shoot, taboos about the body have been rigorously hunted down and exploded in a generation obsessed with harder, faster, stronger. In 1994, Liz Hurley flaunted her body in Versace’s safety pin dress; by 2004, Tom Ford had carved out his Gucci logo in the pubic hair of his campaign models. Today’s runway stars resemble something much closer to the Moss look than the supers of the time. The digital revolution has seen an explosion in exposure to hardcore images; Fendi’s use of strippers would hardly go down in the same way today.

Kate’s rise to stardom has been credited as being part of the grunge moment of 1993, and in that way it was anti-fashion in extremis. Calvin Klein discovered Moss in her breakthrough editorial with Corinne Day in the Face, in 1988. Twenty years later, Day explained: “I didn’t like Eighties fashion because it was all so fake—shoulder pads and makeup. I’d worked as a model in Italy and I always thought the models looked so much more beautiful in everyday life than in the magazines. I liked it when they were being themselves; they looked so much more relaxed and natural.”

Yet in terms of our attitudes towards the body, Kate’s waif look represents the flipside of the same coin of the 1993 feeling that was obsessed with physique. When Vogue came under fire for using Moss for an editorial with Day, Alexandra Shulman defended her choice: “they capture the spirit of the moment, the move away from the work ethic to a new way of dressing.” Getting dressed has never been more concerned with what you do undressed.