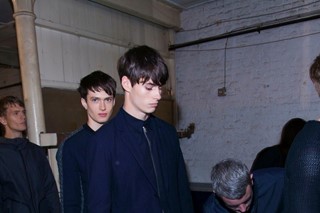 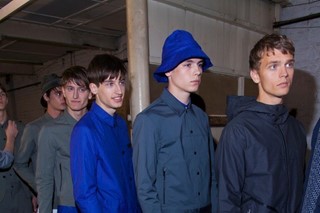 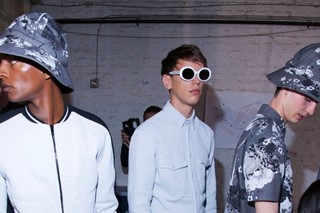 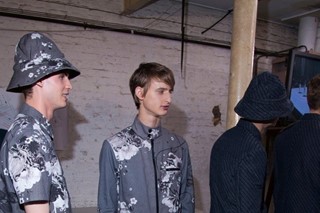 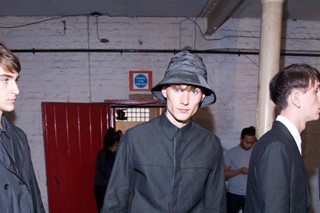 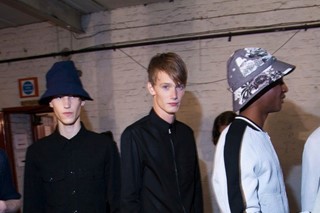 There are times when a show has the ability to produce some sort of rhythm. Yesterday at Rag & Bone, it wasn’t just the revolving mirrors within the show space that created a strong feeling of momentum – but it was the contrasts in references from Samurai clothing to military wear that gave the collection a powerful presence on the runway. Workwear detailing was juxtaposed with beautiful floral prints, and industrial jackets with intricate knitwear to produce a very balanced and consistent collection. After the show, we spoke to one half of the Rag & Bone duo Marcus Wainwright to find out more.

Dazed Digital: I wanted to ask you about how you’ve used the space and the context you have created for the collection through details like the mirrors…
Rag and Bone: That’s a good question. I think our approach to everything, whether it’s a show or looks, is about trying to contrast things so you don’t end up with a one note idea. We do it in the looks, so it’s not all crazy tailoring, or very dishevelled or military, we try and mix it up. So we found this space, which is very industrial and quite us in lots of ways. It had to be balanced, so the idea of twisting the environment with the very modern mirrors, was is cool. The same with the music, we did the very electronic thing and we did the hip-hop that was the idea was to try and clash.

DD: But also with the mirrors they created this rhythm and sense of urgency…
Rag and Bone: I hope so, that was the idea. It was supposed to be chaotic, it was supposed to start slow and get a little bit more mental. It was quite overwhelming with the mirrors when we was trying to do it, we had to do it slowly. But yeah, it was about trying to build the energy; it’s a short runway, short space so we had to try and choreograph it like that.

DD: What were some of the influences this season?
Rag and Bone: There were loads, there was a lot of sport influences this season, a lot of tailoring influences although that didn’t look that obvious, tried to pair it everything down, cargo pants was something that we tried to really focus on because that skinny pants silhouette is really dull, well it’s not dull it’s just done, not new anymore, so we tried to push that idea and did a collaboration with a guy who just does pure military clothing so that’s where that came from. It was good.