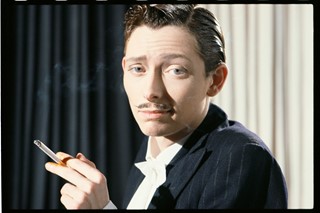 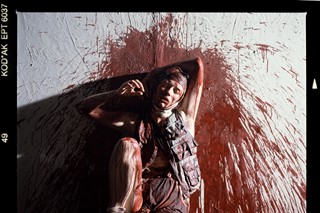 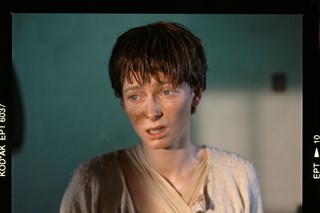 No elaborate sets. No orchestrated movie soundtrack. No colossal casts. Just 72 minutes of Tilda Swinton giving her all on-screen. But as John Maybury’s 1992 film Man to Man proves, that’s all you need. In his adaption of Manfred Karge’s play, the British actress takes on over a dozen roles in both male and female form, retelling 50 years of German history from alternating personal standpoints.

The films opens with a beer-chugging pensioner by the name of Ella Gericke, a widow who took on the role of her deceased husband as a crane operator in Weimar, Germany. What follows are numerous short monologues set in sparse surroundings such as a haystack background or concrete-floored prison cell, interspersed with black and white archive footage and basic audio elements such as the sound of marching soldiers.

This sparseness of all visual and auditory effects only serves to highlight the strength of Swinton’s performance and makes each scene all the more haunting. With an almost frightening ability she switches from character to character, be it a rowdy man slapping his prosthetic cock on the table screaming “Ich bin ein deutscher Mann” (I am a German man), a smooth-talking would-be Clark Gable or a coquettish Snow White lookalike nicknamed Püppchen.

Although the film may start and end with the humourous lines of “another night of rubbish on the telly”, Man to Man proves to move far beyond this self-deprecating slogan. It’s a study in gender and human existence, an emotional historic recountal, but above all a demonstration of Tilda Swinton’s acting range and aptitude.

Dazed spoke to director John Maybury about the challenges of adapting Karge’s austere theatre play to the big screen, cinematic collage language born out of necessity and his verdict about the experimental piece of cinema two decades on.

Dazed Digital: What initially sparked your interest in this project?
John Maybury: In actual fact it was Tilda Swinton that approached me and asked if I would be interested in adapting the stage play for her. I’d worked with her and Derek Jarman on several projects before that: War Requiem, The Last of England, Jubilee. She’d performed the play at the Royal Courts in London before and it was a very austere, minimal stage production, so what was interesting to me was adapting the monologue and turning it into a film using what was then the contemporary digital language. In a way, I was trying to make an MTV kind of experiment. It was like a bridge; I had been making experimental films for about ten years already at that point but also started making pop videos. It was interesting trying to combine those two languages.

DD: What was the process like of adapting Manfred Karge’s play?
John Maybury: What intrigued me was what you can’t do on stage and can do with film. You can get a subtlety of performance in a close-up that you can’t do in a play. The first thing we did was Tilda came round to my flat and I had a little Hi8 video camera and just sat her on a chair in front of me and had her perform the piece straight to me. We watched it together and used that as a point of departure for how to develop different ideas.

In the theatre production, she was alone on stage with just a couple of minimal props. The audience had to do all the work themselves, they had to go in their imagination on a journey with her, almost like in a radio play. But with cinema and television, audiences demand a bit more. We recognised quite quickly that there was an opportunity for her, although she was playing the same character all the way through, to actually play different aspects of that character and to visualise those in different ways.

DD: There is a very intense connection with Tilda when watching the film because it is shot so close-up, in some scenes the camera even focuses in on her right eye.
John Maybury: Exactly. You can do those things with cinema that you just can’t to do in the theatrical situation, but also all the way through I was deliberately referencing other work. When the mouth is speaking through the distorted magnifying glass, that’s a reference to the Samuel Beckett play, Not I. When she is sitting there talking about Kristallnacht and a bucket of blood falls down on her, that’s a reference to the Viennese Actionist artists from the 50s and early 60s.

DD: What was it like working with Tilda Swinton on the production?
John Maybury: Tilda, Derek Jarman and I were all great friends. We had worked together before on Derek’s productions which were very emotional, very intense and very personal. It was just friends collaborating, it had that feeling of a bunch of kids having a mad time.

But for some reason, whenever I work with Tilda, I always give her horrible false teeth and make her look really ugly. What’s refreshing about Tilda is that she does not have any vanity at all. Although people know her as one of the world’s best dressed women, if you look at her film work across the board, she’s very happy to go to places as an actor that a lot of actresses just won't go to - they’re too concerned about their image. Tilda has got that weird balance where she’s an intellectual but also an incredibly beautiful creature, yet there isn’t a contradiction there. Those two characters coexist quite happily.

DD: What style were you trying to achieve when selecting the accompanying audio and visual footage?
John Maybury: The archive footage from various time periods gave another texture to the film, but also it was layering up images in the same way that the text layers up images in your mind. It helps you as a member of the audience to construct an image in your head from the experiences that she is describing. In a funny way, it was asking the audience to do the editing in their head as they were watching it. That’s really the idea behind it, plus we only had about £110,000 to shoot the whole thing, so it was also born out of necessity.

We shot it in ten days in a studio and I went up to Berlin to do some exterior shots there which I tried to treat to make them look like archive footage. It’s about applying a collage language. For the sound effects, it’s interesting again that you can create pictures by manipulating sound in the different levels of the performance, whether she is whispering or by adding sound effects underneath her monologue. It’s really just about making a collage to support her performance all the way down the line.

DD: How do you see the themes of sexuality, life and death being addressed in the film?
John Maybury: Believe it or not, Man to Man is actually based on the true story of a woman who lived disguised as her husband in Germany. Manfred Karge adapted it from news items he found in old papers from the 20s. So even though it’s quite an extraordinary, fantastical, out there film, there is that thread of truth running through it that gives it a power.

For me, it’s a tale about survival techniques. It’s something that as a a gay man I’m fully aware of, the different strategies you have to try and apply just to navigate life. I’ve just been watching stuff recently on the news about what’s going on in Russia with the treatment of gay, lesbian and transgender people there. In some parts of the world the treatment of outsiders, if you want to call us that, is still very difficult; so the film has its own relevance in that respect for sure. In times of recession and when things get tough, it can actually provoke the very worst in people, culture and societies at large, as well as the best.

Aging is another subject in the play, but you’re as young as you feel. I think that’s why Manfred Karge’s text is really clever because it does touch very lightly on all those subjects: identity, sexuality, time passing and memories. It does it in a very interesting way and I hope that the film, although it is much more visceral and difficult, takes the audience on that same kind of journey.

DD: How do you feel when watching the film now?
John Maybury: Looking back, the film was quite radical at that time. The content was really strong, it touched something in people. Obviously, that mostly has to do with the quality of Tilda’s performance, but also with Manfred Karge’s text. Between those two things there’s an awful lot of complex subject matter being woven together, but I hope that the film helps those things come out in different ways – supports them in some places, underlines certain points or maybe contradicts them in other places. But my main objective was always that it would make an audience think.

After recently watching the film for the first time in twenty years, I have to say I like it a lot. I like the person who made it and it’s a nice reminder to me that I should be prepared to take risks. I’ve done big productions but you maybe get into a comfort zone of doing things in a more slick, traditional way and actually, I like that person who was brave enough to be that experimental. I’m quite happy that he should come back again every now and then.

Man to Man screens at the ICA until Thursday 20 June.