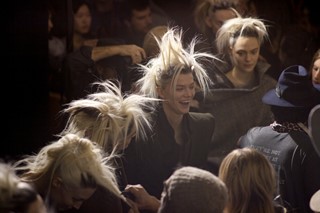 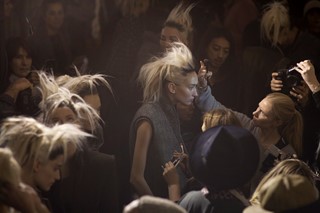 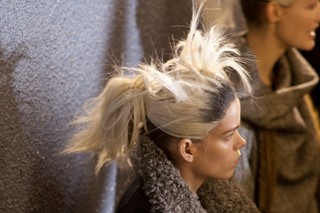 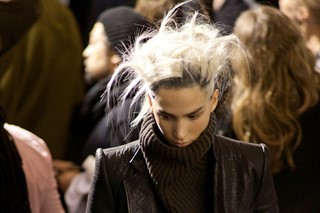 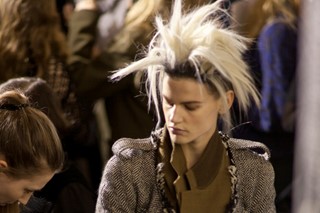 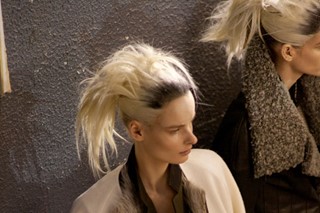 The languid and sometimes lethargic speed of Haider Ackermann’s shows in recent seasons, suddenly had a newfound urgency yesterday. That was compounded by the echoing thud of an army marching that could be heard on what again, is always a telling soundtrack. It then phased in and out of the delicate and romantic vocals of Marilyn Monroe’s “Kiss”. This was the duality that Ackermann spoke of backstage. “I’m surrounded by strong women, who are a force,” said Ackermann. “But due to the years they are getting more fragile - that fragility is very touching to me.”

And so it is that Ackermann had his blonde ambition moment, done in his way of course. Eugene Souleiman’s bleached out hair came peaked and tufted into soft spikes with dark roots showing. Another duality. The clothes likewise, tred Ackermann’s familiar territory of twisted and raw-edged tailoring that felt tougher this season with its faded leather textures, loden green wools and rough tweeds. The proportions went oversized and in overdrive, with the fur-lined and shearling jackets. There’s something metaphorical in a twisted off-the-shoulder, long sleeved top that droops around the model’s body – a woman’s reliance and clinging onto men in life perhaps, which when thinking of Monroe can be a bittersweet moment. Luckily for Ackermann’s collection, we’re just talking about borrowing from men in a sartorial sense. “She’s with a soldier and she’s running away, not with him but with his clothes.”