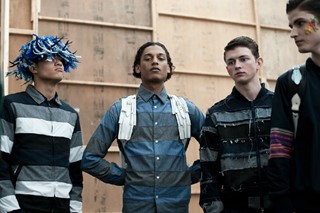 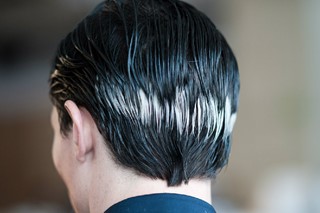 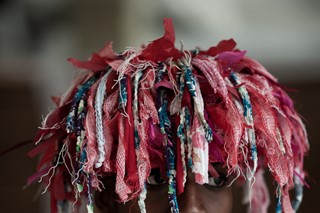 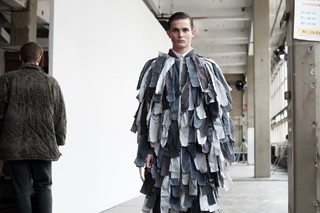 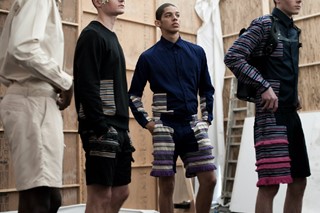 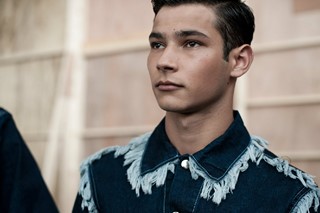 In past seasons, Christopher Shannon has looked to a rough and ready athletic model for his casting, communicating an idea of modern masculinity. This season saw that athleticism again, but his selection leant more to cleaner cut look and the hair and beauty backed this up. “Chris is definitely one of those guys that likes to do something with his shows. After looking at all of his references, everything from Burning Man Festival to Northern England's heritage, and talking to him about this direction, we used those ideas but in a pop way,” explains make-up stylist Lauren Parsons. Inspired by his ideas of folklore and festivals, floral details appeared on the face, using elements from Shannon's fabrics to tie it all together. “Basically what we wanted to do was just get beautiful guys and make them look like they had rolled about in the grass. But absolutely perfectly”.

His collection didn't disappoint. The Shannon signatures of contrasting fabric sections, nylon stripes set into sweatshirts, trousers and shirts, and tassels, which were also seen last season, were both present. Giving things a new take though, and really pushing things forwards, where his colours may have previously been muted, for S/S13 Christopher most definitely brightened things up. Reds, bright marine blues, even light beige, all gave the collection an aptly summery feel. “I get a bit excited in summer so I really wanted my colours and references to be full on this season,” he explains.

Those references came from a wide variety of sources but all had something distinctly striking about them and continued to tell his story. “Again things were very British but I took that in a new direction and started looking at folklore,” he says. “I then contrasted that with the idea of really badly behaved gap year students and how there is that whole way of dressing stupidly for the sake of a party but interjected with normal clothes”. Sewn on badges, another new addition, also appeared across different pieces, notably a stand out denim jacket where the shoulders and front panels were covered, inspired by 60s and 70s denim.