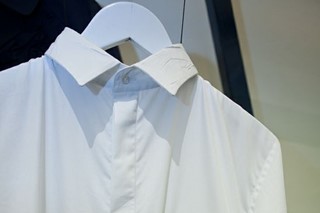 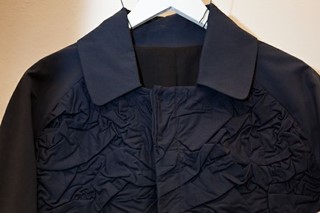 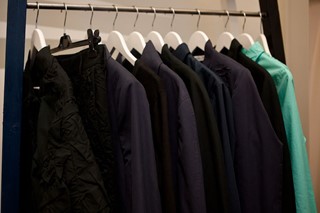 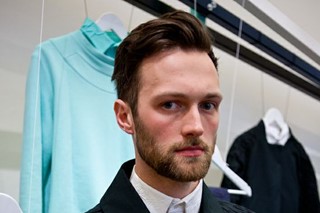 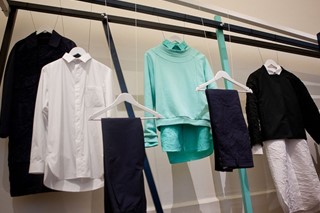 Central St. Martins MA graduate Christopher O'Brien went on to intern with London's colourful mens and womenswear star Jonathan Saunders before working at contemporary tailors E. Tautz and subsequently setting up on his own. Only into his second season, O'Brien is already stocked on forward thinking online store, LN:CC and is receiving growing accolades for his technique, fabrics and design style.

Researching and developing new fabrics has been at the core of his work so far, creating wrinkled cottons and silks, interspersed against classic shapes and textures, to tell his story. This season saw a number of traditional Autumn Winter staples updated using his techniques and offering a modern, ultra-contemporary take on items including the dress shirt, car coat and formal trouser. His references stem from minimalism, art and photography and he looks to technical fabrics and sportswear to create complex layered garments in a clean, sleek style.

Dazed Digital: What are the ideas and concepts behind what you do?
Christopher O'Brien: It's quite a collection of ideas ranging from tailoring through to sportswear and its kind of a hybrid connection of the two. When I research I don't really concentrate on a theme, its more an amalgamation of ideas that I try and form together into a collection.

DD: Did you have a starting point for this season?
Christopher O'Brien: For Autumn Winter it was actually an image that I had found of three random guys walking down the road. One of them had a jumper over the top of a coat and it was really restricting it, bringing it in very tight. That's where I saw the wrinkled look that I wanted to develop.

A jumper worn over a coat is purely styling but I then worked with that and took it somewhere new. The crinkle on the outside distorted the silhouette but without actually changing the shape of the body, it was purely coming rom the textile. I think for menswear especially, there aren't a lot of designers that offer something new in the way of materials and it is something I am interested in doing. .

DD: There seems to be a cross of both simple classic shapes and something really modern about what you do.
Christopher O'Brien: I'm definitely trying to push things forward but at the same time I'm trying to make things that are really wearable and also have a true Christopher O'Brien signature.

DD: How does that translate into the pieces that you design?
Christopher O'Brien: Obviously I have a number of pieces which are really quite new, have a distinctive quality about them. But, I also want to filter that down and take certain elements of the more avant-garde pieces and subtly apply them to more accessible ideas. For instance, rather than using a full crinkled textured body for a piece, I will make it up in a traditional fabric but add detailing. Folded and crinkled silk ribboning for example, to add a luxurious but strange element.