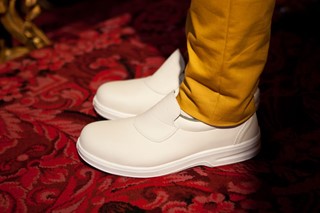 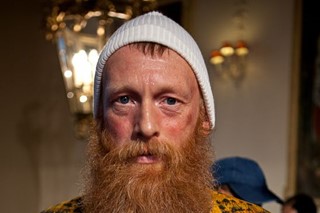 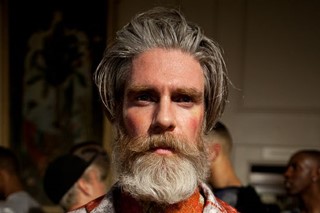 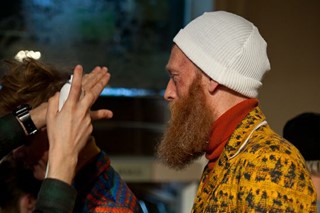 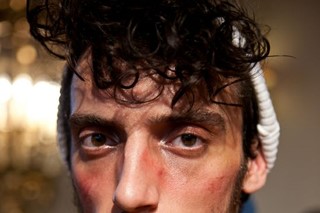 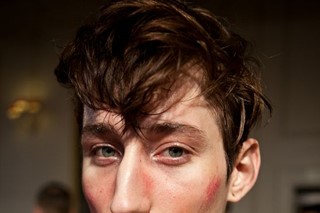 Following in the footsteps of the Fashion East show in collaboration with Top Shop, MAN is the menswear offering that showcases three designers selected from the many emerging hopefuls by Lulu Kennedy and her team. The chosen designers for Autumn Winter 12, sleeted by a panel including Charlie Porter, Nicola Formichetti, Daryoush Hajnajafi and Tim Blanks, were Shaun Samson, Agi & Sam and Astrid Andersen. All three offering something different for their men, but this season all producing collections that, inadvertently, complemented each others aesthetic.

It was big and bad for Samson this season, with hugely oversized silhouettes and structured shapes providing a tough look, but one that definitely had a sense of fun

First up was Shaun Samson. This is his second catwalk presentation as part of MAN and following on form his previous and highly praised collection was never going to be an easy task but with his loose, hip-hop inspired show he certainly managed it. It was big and bad for Samson this season, with hugely oversized silhouettes and structured shapes providing a tough look, but one that definitely had a sense of fun. Big punchy lettering was emblazoned across a number of long mesh t-shirts, some in fur others in a longer, abstract, hair-like material. Then it was wide legged trousers referencing that baggy jean look inherent in hip-hop and huge, inflated looking jackets included an amazing padded trench. Another standout piece was the over sized varsity jacket, slung low down to the knee. While this was urban, it was referenced in a dark way, this was something twisted and contorted.

All three offering something different for their men, but this season all producing collections that, inadvertently, complemented each others aesthetic

Agi & Sam, the current golden team that have emerged over the past few seasons provided the second offering. Having worked with designers including Karl Lagerfeld and Alexander McQueen, the duo decided to go it alone, and London's menswear community are most definitely pleased they did. Contrasting last seasons refined tailoring and Hawaiian acid colours, this collection was tonally calmer but in keeping with their aesthetic. Multicoloured woven overcoats, trenches and top coats provided the mainstay of the collection, teamed with abstract patterned printed trousers and shirts. An oversized tartan, blown up out of all proportion was another stand out print, and featured on car coats, parkas and macs. There was a sense of the decayed about this season, from a mish-mash of both young and old models to their purposefully dirtied face, this collection felt decadent and trashed. It was California, the way you hope it might be.

Finally it was the turn of Astrid Andersen, showing for the first time as part of MAN and graduating from the NEWGEN installations which she was involved with last season. Following on from her classically sportswear inspired collections, this season was an evolution of that aesthetic. Abstract prints featured across the offering, in grey puffa's and trousers, teamed with bright pink mesh combat trousers and indigo denim all-in-one's. A tough call, but one that worked well with highlights including the padded jumpsuit and structured silver body-warmer. Closing the MAN show her boys walked the catwalk as a gang, this girl clearly means business.