Cinematic sweeps and French Pop from the celebrity favourite 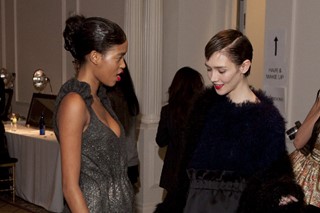 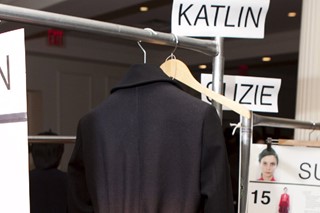 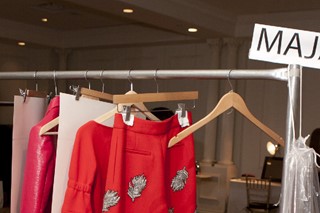 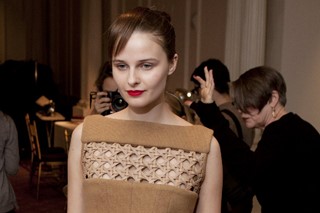 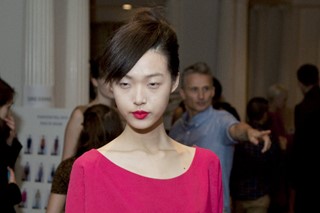 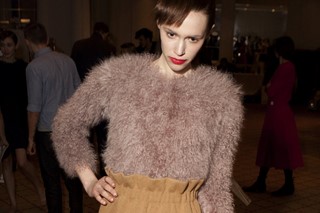 The scene is The Plaza Hotel, Sunday night, and seats are being filled for the Thakoon show that's about to begin. The red glow from neon and filtered lights setting the mood, along with the soft carpeting and gilded ballroom setting. The models began walking and the sweeping strings of Henry Mancini's Lujon began to cast a cinematic wave over the entire venue.

Suddenly, the hypnotic arrangement transported you into a Nouvelle Vague romance, looking out over the Italian sea from the roof of Casa Malaparte in Jean-Luc Godard's Contempt (Le Mapris). Bridgette Bardot comes to mind in the opening scene, laying in the nude and asking her husband if he loves her, cast in the red filtered glow of their bedroom. The collection began to take on some 1960's French New Wave sensibility of it's own, playing classic bourgeois shapes and silhouettes against a subversive material Pop effect: wicker paneling, printed sateen, fuchsia fur sweaters and slick black cocktail ensembles with lacquered kiss lips and melting hearts.

Pop is an awareness, a sign of knowing the expectations and either exploiting them or embracing them but never denying they exist. It's awareness that makes Godard films so intriguing and funny and serious all at the same time. It's also what allows a designer with as much clout as Thakoon to be playful and kitschy and still maintain an air of drama and sensuality – with a little help from the great Mancini.