The subversive word artist waxes lyrical on ghosts, situationists and the inevitable failure of late-capitalism 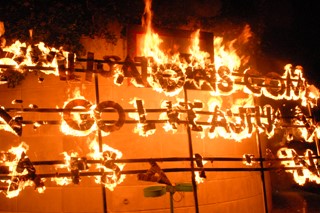 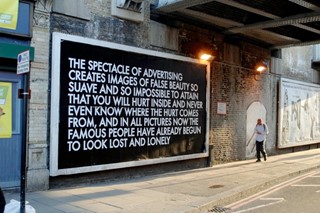 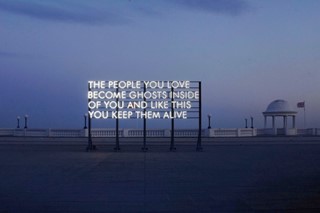 This year the streets of various European capitals have been adorned with phrases such as CIVILISATIONS COME AND GO LIKE AUTUMN RAIN and WHENEVER YOU SEE THE SUN REFELECTED IN THE WINDOW OF A BUILDING IT IS AN ANGEL due to one artist's continuing efforts to engage passers-by with his emotionally-charged and often melancholic abstract poetry. Robert Montgomery works in the situationist tradition and continues to relentlessly hijack advertising spaces across the globe in order to provide a reflective space in which a public so used to being psychologically bludgeoned into a consumerist daze can find some repsite from the relentless static of the modern world. He is currently exhibiting at Galerie Nuke in Paris and Galerie Analix in Geneva. He is also working  on a major new piece for the Grand Canal in Venice on the theme of dying Empires for an exhibition curated by Maurizio Bortolotti for the Biennale

Dazed Digital: What is interesting to you about presenting your work anonymously outside the context of a gallery?
Rob Montgomery: I've been making work in the streets in one way or another since I was very young. Right back when I was a student at Edinburgh College of Art, in my post grad year I did the Aerial Project[1] with John Ayscough where we raised £30,000 from the Scottish Arts Council to make interventionist work in the streets of Edinburgh. That's the first time I made work on billboards. What interests me in working anonymously is that people encounter it without knowing its art.

They know its not advertising, and its not graffiti either and they do not need an art history knowledge to read it. I'm super-interested in the ordinary person at the bus stop getting on the bus to their job everyday and suddenly seeing this weird text. I'm interested in reaching those people. They are my primary audience.

DD: What do you hope to engender in the member of the public who happens upon your statements?
Rob Montgomery: Just recognition hopefully – I'm trying to write about our collective unconscious in public space. Let's say I'm trying to write about what it feels like on the inside to live in "Late-Capitalism" as Theodore Adorno and Frederic Jameson would call it. What it feels like to live in our cities, what it feels like to live with our privilege of wealth and our poverty of time, our privilege of material goods and our poverty of reflection, our anxiety as the systems of economy and ecology we rely on falter, revealing economic injustice and a future that's more fragile than we thought.

DD: What do you think the view of the mass public is of contemporary artists?
Rob Montgomery: I’d like to think of a public of individuals. I think that’s a more positive idea. And I think at its best art is an intimate conversation with strangers, one at a time, heart-to-heart. It’s quite a privilege to be able to communicate intimately to people you never meet and it really means a lot to me when a stranger bothers to seek out my website and emails to say they saw some of my work in the street and it touched them. And anyway I think ordinary people are by-and-large more open to contemporary art than The Sun and The Daily Mail would have you think.

DD: Can you talk to us a little about your GOD IS BORED OF US statement? What role does religion play in your work?  Rob Montgomery: Ah... that's really interesting. I get a bit of heat on this one from some of my Richard Dawkins devotee friends. I do think we are living with less spirituality in our immediate culture than human beings traditionally have, and I think that causes us a bit of pain. Equally, I don't believe or support any religious dogma and I'm against religious fundamentalism of all kinds. GOD IS BORED OF US was a piece I made back in 2004 that I put outside churches — apeing those Evangelical signs you get outside Baptist churches that say things like GOD IS LOVE and IF YOU KNEW JESUS YOU'D BE HOME BY NOW. Haha... That's actually a really good one isn't it? Maybe I could sell that to the Baptists, maybe I could get a gig writing those signs.

I also used GOD IS BORED OF US as the title of two shows I curated at FMCG in 2004 done as benefits for the Stop The War Coalition. I was outraged at how Bush and Blair had used their supposed "Christian Faith" as part of the justification for their illegal invasion of Iraq.  The shows were interesting actually, some really powerful anti-war work. Tracey Emin showed a beautiful appliqued American flag with the words “Blood, Blood And More Blood” embroidered on it.

DD: You often make  references to religion, death and so on in the abstract – what is  your take on mortality?
Rob Montgomery: I've lost a couple of really close friends who have died very young. My two closest friends from art college already died for example and I think when that happens it makes you turn to those questions. I find ideas of angels and ghosts very comforting in that context. I find the idea that somehow love can triumph over death an idea I need to keep sane. After my close friend Sean Flynn died I made quite a lot of work about death. The most uplifting piece I think is the one I showed Basel this year – THE PEOPLE YOU LOVE BECOME GHOSTS INSIDE OF YOU AND LIKE THIS YOU KEEP THEM ALIVE. It’s made from recycled sunlight – the sculpture recycles sunlight to illuminate itself, as a metaphor for what we do when we remember someone we love. And I really like the idea of ghosts as a positive thing….

DD: What do you honestly think about the fashion industry?
Rob Montgomery: Lots of my best friends work in the fashion industry, and sometimes I do. What do retouched images of impossible and unattainable beauty designed to sell us things do to us on the inside? That's a different question. I think they probably hurt us on some interior level, that they leave a residue, a subconscious ache, of unfulfilled desire inside of us, but I think the piece says it with more Pathos than I can say it here.

DD: Can you talk to us a little about the situationists and why you feel they were an important movement?
Rob Montgomery: Of all the post-Marxists, post-structuralist theorists, post-modernist thinkers and art history essayists I read at University I thought Guy Debord was the most important. And that's because he is fundamentally interested in what Capitalism does to us on the inside. He also very early on predicts what I was just speaking about – that in their hyper phase Capitalism and the Media will coalesce to make increasingly suave and seductive images of artificial beauty which will alienate us from real life, fill us with impossible desire, and break our hearts.