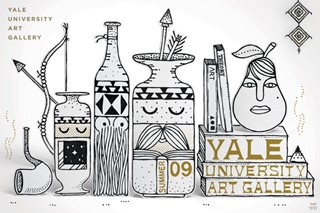 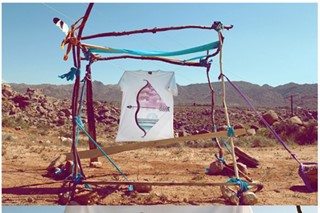 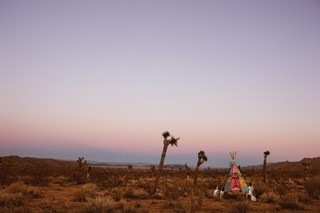 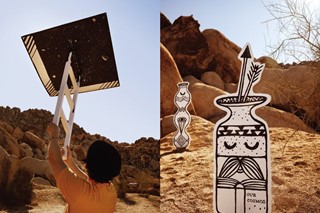 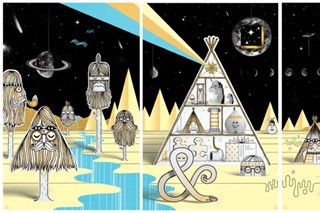 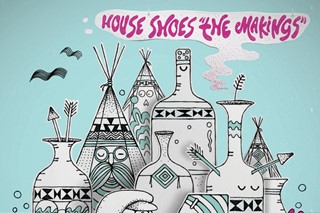 California’s mystique inspires in a timeless manner, and the art of Steven Harrington does the same. The 31-year-old LA native's symbolism and sand blasted characters ponder the earth’s greatest, unanswered (often unanswerable) questions across a wide variety of mediums – from large-scale installations to hand screened zines. Co-founder of the stellar design agency National Forest, alongside Justin Krietemeyer, Harrington has collaborated with some greats of global art and design – from Sixpack France, Incase and Arkitip, to musical homies Flying Lotus, House Shoes and the Do-Over party> his work has even graced the Yale University Art Gallery. His recent painting and sculpture psyche-out at the Scion Gallery was part of Sixpack’s It Was On Earth That I Knew Joy, and it documented his wander into the cosmos with photographer Brigitte Sire and Justin Krietemeyer. We dare you to take the trip.

Dazed Digital: How does Los Angeles inspire you?Steven Harrington: The vast and sprawling culture of LA holds a particular mystique and charm to me. It has a very unique landscape with a thriving mix of cultures. The sun is almost always shining; the ocean and mountains are 25 minutes away. It has new destinations to be discovered until the end of time.

DD: Does British culture have an influence on you?Steven Harrington: Definitely. I am a massive fan of Old Speckled Hen, fish and chips, Trojan Records, shepherds pie and early British rock music – The Rolling Stones, The Moody Blues, Donovan... Aside from your classically timeless contributions to popular culture, I’ve always had a fascination with (so foreign to me) British humour.

DD: Your characters and the symbolism, it’s kind of a new psyche Cali vibe?Steven Harrington: Yes. Native American symbols have played a major role in my work lately. I feel these symbols and icons very much represent a strong sense of social community and connectivity, something I feel we lack greatly today, especially in America. I guess incorporating these symbols into my work is just my way of trying to reflect a sense of community and connection amongst my viewers.

DD: There is a certain universal and timelessness aesthetic in your work.Steven Harrington: I enjoy creating objects that other human beings can relate to… not quite nostalgic but closer to a personal photograph or memory. I have always felt a strong connection to printed objects, and that is what I like to make. My process is very intuitive, so many of the meanings or messages are often revealed after the piece is created. Each piece is created as a tangible object that is part and parcel of a larger context. Whatever feel or meaning the observer takes away from the piece belongs to the observer. Discovery is the key.
DD: How was it working with Sixpack and Arkitip? Two leaders of the gang.Steven Harrington: Lionel Vivier (Mr Sixpack France) has been absolutely radical to work with. I was introduced to Lionel through a mutual friend, Cody Hudson and we just hit it off. Lionel and I see eye-to-eye on things conceptually, and I’m insanely stoked to have had the opportunity to build so much with the Sixpack brand over the years. Arkitip is one of those brands that I’ve looked up to ever since I was introduced way back in 2001. They’ve been making really cool things for a while now, so I’m honored to be a part of their family. Scott over at Arkitip is a real pioneer within the art world and has a radical vision for the issues. I couldn’t be happier with our collaborations.

DD: What’s next?Steven Harrington: I’m working on several t-shirt graphics for Undefeated. I’m always working on clothing apparel and art direction for Sixpack France, a limited run artist board with Monument Snowboards and finalizing a 3D art/enamel/metal/can’t say/type-thing with Kidrobot. I’m also shipping out several pieces for a group show in Sydney curated by Aaron Rose scheduled to hit next month, working on several new surprise projects with Arkitip Los Angeles, and my contribution cover to Living Proof magazine just dropped. I am sculpting away on some clay at home for the hell of it, making new and interesting meals in the kitchen, trying to ride my skateboard more often and would like to be jamming away on the drums more than I do. I’m also trying to get some reading in there as well…